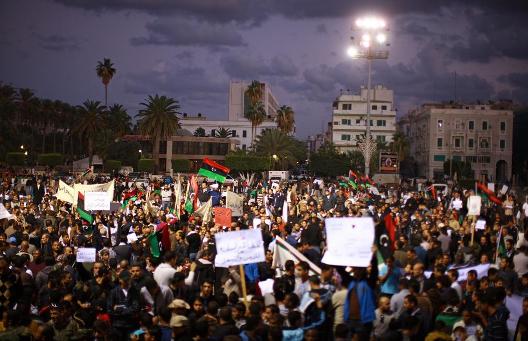 Recent foreign reporting of Libya would suggest that we are on the brink of a civil war. The departure of Prime Minister Zeidan, the inability of the central government to prevent the escape of a mystery oil tanker laden with Libyan oil, the fighting in Sirte: taken together, these portend, in the eyes of outside observers, a tinderbox country just waiting for a match.

For example, in recent article by the Guardian, unnamed sources are quoted as claiming that “there’s tension everywhere on the streets… Everyone is preparing for war.” A London-based oil analyst believes, from a glass box overlooking the Thames, that the east of Libya will soon make a universal declaration of independence. A security analyst warns that “what happens next will be violent.”

Three days ago, a car bomb in Benghazi killed eight soldiers leaving a graduation ceremony. Three days before that, six people were killed in Derna. Three weeks ago, seven Egyptian Christians were executed in Benghazi. These are just a handful of the fifty-one people who were killed in Libya in the last month alone. What is happening is already violent.

The dead are not honored, however, by being used as exemplars for extravagant prophesies about the future of the country as a whole, nor about the resilience of the Libyan people in the face of uncertainty, insecurity and occasional catastrophe.

The truth is that the vast majority of Libyans continue to go about their everyday lives. Yes, Libyans are suffering from unemployment, a lack of investment, and the brutalizing consequences after forty-two years of dictatorial rule. But walking the streets of any city in the country will quickly tell anyone that Libya is not Iraq, or Afghanistan, or Somalia.

The bonds of family, friendship, religion, community, and basic decency towards each other are what hold Libyans together. Their ties are strengthened by the common experience of the revolution, and by the reasonable belief that they live in a country with more than enough wealth to secure their future. Across potential divisions of geography, identity, wealth, and ethnicity, Libyans have intermarried, traded, and collectively suffered repression. Those bonds are now serving us well.

The National Dialogue is half-way through a Participation and Engagement tour of Libya. In thirty cities, we provide Libyans an independent, apolitical forum in which to speak up, in the knowledge that they will be impartially heard and taken seriously. For the first time in forty-two years, they have the chance to express their grievances about the present and aspirations for the future.

Libya has started to build a genuine grassroots movement for dialogue and the peaceful resolution of differences. Already the National Dialogue has mobilized scout troops, civil society organizations, and leaders of ethnic and tribal groupings to endorse and support the process. The Dialogue does more, however, than establishing another talking shop. It helps to build a framework through which Libyans can strengthen political consensus.

That is not to say that the National Dialogue is a political process. It is not. Rather, it is a recognition of the fact that political unity can only be achieved when people have a chance to shape the rules of the game.

While the grievances vary and are often locally focused, it is clear from the Participation and Engagement tour that Libyan aspirations are twofold and all-encompassing: national unity, and security and stability.

One hardly needs a pollster to say that concern over security and stability occupies the minds of the vast majority of people, but public support for national unity runs counter to the general narrative (as played out in the media) of a factionalized population exclusively loyal to tribal, ethnic, or regional identities. These loyalties exist, and greatly impact the course of the future, but so too are the values of peaceful coexistence, rule of law, and territorial integrity that only the state can uphold.

As one participant said, during a recent event in Tripoli, “the problem in Libya is that while everyone is talking about the outcomes we want, no one is discussing how we are going to get to them.” Dialogue provides a clear alternative to the politics of the gun, and enables Libyans to arrive at a more sophisticated understanding of the values that statehood upholds. By creating consensus around those values, the National Dialogue enables strong social bonds to begin to coalesce into the political frameworks that will create the security and stability so desperately desired.

The oracles of civil war and anarchy tend to fall into two camps: the ill-informed, and those who want to use Libya as a case study to press the argument for more isolationist Western foreign policies. If Libya, an oil-rich nation with a small population descends into chaos in the aftermath of revolution and NATO airstrikes, what hope exists for any nation in which Western powers may intercede in the future? What’s the point?

The point these observers fail to understand—or prefer to forget—is that Libya hardly counted as a nation for forty-two years. It represented the personal fiefdom of a grotesque megalomaniac clown. Under Muammar Qaddafi, a Libyan sense of identity was crushed and replaced with a litany of fads: Pan Arabism, Pan Islamism, Pan Africanism. Other identities—tribal, ethnic and social—were exploited and used against each other. It was a crude, brutal strategy of divide and rule.

Successive generations since the 1970s (Libyan youth represent 64 percent of the population) have grown up conditioned to mere survival, without educational opportunities or institutional guidance. No wonder, then that there is so much short term thinking and such quick resort to violence. What Qaddafi wanted, in the end, was to be left alone in splendid isolation, to enjoy all the shiny baubles that oil can buy. If Qaddafi had his way, as he admitted, the Libyan people would simply have been forcibly migrated to sub-Saharan Africa.

Over time, the institutions that uphold the rule of law were gutted, the culture mocked, the people terrorized. Basic dignity was stripped away and justice and fair play were systematically eradicated. All that was left, when Qaddafi was gone, were the ties of love and respect.

The state of Libya right now should give us all great hope—that in the face of calamity, love and respect can, for the most part, carry us through. They will not hold Libyan society together forever, but they can provide strong foundations from which to begin the work of building the organizations and institutions that protect us when our more banal instincts break through.

Fadel Lamen is the chairman of Libya’s National Dialogue Preparatory Commission and a nonresident fellow with the Atlantic Council’s Rafik Hariri Center for the Middle East.