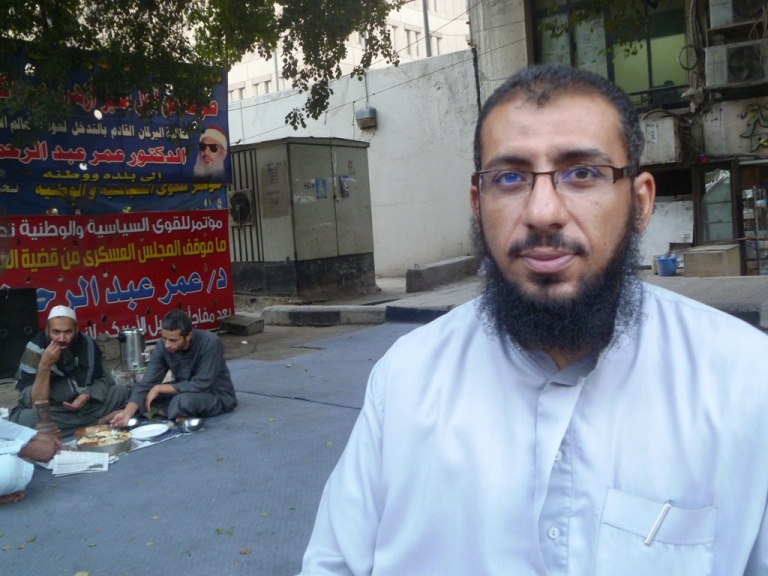 Last week Ayman al-Zawahiri, the leader of al-Qaeda, invited Muslims to kidnap Western hostages to secure the release of the Blind Sheikh, Omar Abdel Rahman. This week, the sheikh’s son invited me to dinner.

Abdullah Omar Abdel Rahman believes his father was the victim of an Egyptian-American conspiracy to silence one of then-President Mubarak’s fiercest critics. The Blind Sheikh is currently jailed in North Carolina on charges related to the 1993 bombing of the World Trade Center.

His son, Abdullah, leads a sit-in protest outside the US Embassy in Cairo which has lasted for over a year. I visited him seeking reaction to al-Zawahiri’s call, but arrived just as the rice and meat platter was being served. In typical Egyptian fashion, he urged me to partake.

“We have held seminar after seminar to show the world that Omar Abdel Rahman is innocent and should be let go,” stated Abdullah.

“I am against any violent action, but I warn the United States against the anger of Muslims in regard to his imprisonment.”

Earlier, al-Zawahiri not only appealed to this anger, but aimed to enflame it.

“God the great and almighty granted us success to capture the Jewish-American Warren Weinstein,” stated al-Zawahiri.

“We are seeking, by the help of God, to capture others and to incite Muslims to capture the citizens of the countries that are fighting Muslims in order to release our captives.”

Abdullah explained the principle of al-Qaeda was to oppose power with power, but that the approach of his family was different, in addition to being more in accord with Islam.

“The Quran says, ‘No bearer of burdens will bear the burden of another,’” he stated. “So if someone aggresses against you, you do not have the right to aggress against someone else. We are against the kidnapping of any American citizen as a hostage. If the state was Islamic it could take prisoners and exchange them, but this is the right of a state and not of individuals.”

The call to kidnap has not only come from abroad, however. Abdullah has been urged to take hostages from some of those who visit the protest in support. He refuses.

“The kidnapper believes he is justified, but he is not,” stated Abdullah. “This is because Americans reside in Egypt under a guarantee of protection from the state, which must be honored.  If there are kidnappings it will result in a very dangerous escalation which will be helpful to no one.”

Yet should such a kidnapping take place, Abdullah is clear concerning the primary responsible party.

“Before we blame al-Qaeda for their ideas we have to blame the United States first,” he said. “American policies and the continued imprisonment of Omar Abdel Rahman have provoked Ayman al-Zawahiri into this pronouncement.”

Abdullah does not believe al-Qaeda’s threat will make any difference in securing his family’s primary goal – the release of their father. Though they share the same end goal, the different means do not result in outright condemnation.

“We agree with al-Zawahiri on many things, such as the jihad in Afghanistan and the call to liberate the occupied territories,” stated Abdullah.

“In his defense of Islam he has left behind his worldly comforts and wealth in the path of God. But we oppose him in any action that is taken against civilians.”

The critical issue is to know if Abdullah is speaking the truth, or seeking to present an image congenial to Western sentiments. Earlier, I asked Muhammad, a supporter of the protest, his opinion on a recent concert in Upper Egypt which was disrupted by Islamists. Getting a straightforward answer was like pulling teeth.

“The concert was opposed because they were serving alcohol and making too much noise for the neighbors,” he offered continually. He spoke of the beauty of chanting the Quran, the desire only to implement Sharia law gradually, and the need for Muslims to keep themselves from that which is forbidden. Eventually, he admitted they needed also to keep others from the forbidden.

“Popular singing and musical instruments are against God’s law,” he finally admitted. “Yes, they were wrong to stop the concert apart from police authority. But an Islamic state that applies Sharia law will not permit such a public performance.”

Support from al-Qaeda will lend no Western sympathy to his cause, no matter its merits or lack thereof. His own sympathy for al-Zawahiri will damage it further.

Yet the very public call to kidnapping must not obscure the differences between Islamists, some of whom are willing to use violent means, while others condemn.

Yet whether or not Abdullah expressed his convictions, or Muhammad sought to hide his own, both operate within the variable relations between political Islam and power. All states claim a monopoly on the use of violence, and Islamists desire to wed this power with religion to guarantee its proper use.

That is, if they speak sincerely. Do they desire justice, as Abdullah presents it, or enforcement of a social vision, as per Muhammad? Is Abdullah’s non-violence a commitment, or will it yield to al-Zawahiri’s pragmatism if continually frustrated?

Answers to these questions require divining the Islamist conscience. An invitation to dinner can only go so far, but it is far better than an invitation to kidnapping.