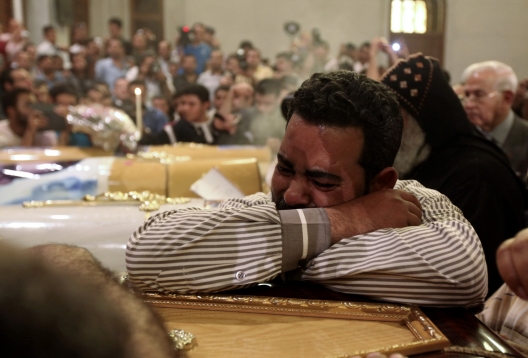 Photo: The relative of one of the victims of clashes between Christians and Muslims in the town Khusus cries during funeral prayers in a church in Cairo April 7, 2013. (Mohamed Abd El Ghany/Reuters)

Released on July 28, the US State Department’s 2013 International Religious Freedom Report documents the status of religious minorities and religious freedom in Egypt over the course of the year, whether under former president Mohamed Morsi, or under the interim government after his removal.

According to the report, Egypt’s religious minorities, 10 percent of which are Christian, and 1 percent Shia, as well as small groups of Quranists, Ahmadi Muslims, fewer than 100 Jews, up to 1,000 Jehova’s Witnesses and 2,000 Bahais, have faced issues of societal discrimination, as well as governmental discrimination and inaction.

The report points to an uptick in the prosecution of defendants accused of blasphemy over the past year. Egyptian law requires prosecutors to investigate criminal complaints filed relating to blasphemy, but the shift in 2013, was the actual prosecution and conviction of at least nine of these cases. The courts convicted four Muslims and five Christians, the latter of which included two minors under the age of 11. Another shift in these cases, which the report points to, is the fact that these cases are now being brought against regular citizens, as opposed to public figures as was the case under former president Hosni Mubarak.

The report also points to longer sentences given to Christians as opposed to Muslims convicted of the same crime. In some cases of sectarian violence, only Christian suspects were sentenced, while Muslim suspects were acquitted. After the 2013 clashes in the village of Khusus in Qalyubiya, during which at least two Christians and one Muslim were killed, 43 defendants were sent to trial. No suspects were presented for the killings of the Christians. One Christian defendant was given a life sentence, while two others were sentenced to 15 years each. Eight Muslims were given sentences ranging from six months to five years.  The remaining 32 Muslim defendants were acquitted.

In the wake of the Khusus violence, clashes erupted at a funeral at the Coptic Orthodox Cathedral, during which security forces “security forces “fired teargas canisters excessively at mourners,” according to the local NGO, the Egyptian Initiative for Personal Rights. Police failed to prevent further attacks on the Christian mourners, and while an investigation was launched on Morsi’s orders, by the end of the year, according to the report, the investigations were still open.

The State Department report also points to the government’s inaction when it comes to protecting religious minorities in Egypt. The Christian and Shia minority have, in particular, faced the brunt of this, with violent attacks documented in the report which have led to the deaths of at least four Egyptian Shias and up to 20 Christians, as well as the destruction of over EGP 30 million worth of property. A large majority of this property was attacked in the wake of the violent dispersal of the pro-Morsi sit-in in Raba’a on August 14, which left hundreds of the former president’s supporters dead. In addition to attacks on churches, and the homes and property of Christians, two Sufi shrines were attacked on August 4, prior to the sit-in’s dispersal.

Other issues minorities in Egypt faced over the course of the year, according to the report, include societal discrimination, incitement, and hindrances in building places of worship. The government’s inaction, or informal approach of using reconciliatory sessions, has done little to address the core reasons behind the discrimination.

US government policy, according to the report, has been to bring cases in which the government failed to protect religious minorities to the attention of Egyptian authorities. Among the issues highlighted by US officials including the President, Secretary of State, Ambassador, and State Department and embassy officials, are discrimination against Christians, Bahais, Muslims, anti-Semitism, and conversion.