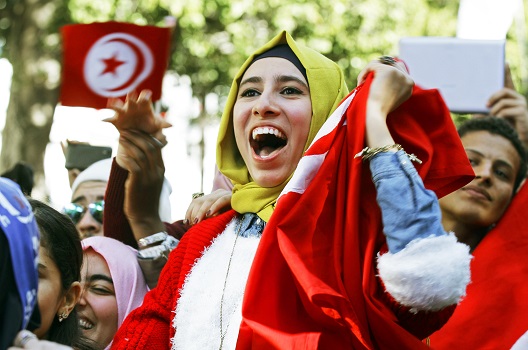 Student unions in Tunisia lack dividing lines between political action and the unionist role inside universities, which has contributed to the outbreak of campus violence in the past year. Politicized union structures lost the ability to distinguish between their own activity and the stances of students from political parties affiliated with them. Although they played a vital role in the transition, they neglected their primary roles in defending students’ rights and developing education. In light of the rising Islamist-secular polarization surrounding recent elections, these unions have found themselves mired in campus clashes. As Tunisia nears the completion of its transition to representative democracy, the two main forces in universities—the leftist-affiliated General Union of Tunisian Students (UGET) and the Ennahda-affiliated General Tunisian Union of Students (UGTE)—must cut back on polarizing political action and strengthen their original unionist function.

Ben Ali’s dictatorial regime stifled political pluralism in the country, so student unions became a tool for practicing politics and opposing the regime. Since 2011, the political role of student unions continued to overshadow their unionist work. The transitional authorities’ monopoly on decision-making during the extended transitional period led Tunisians—and student unions in particular—to criticize the Troika government, led by the Islamist Ennahda movement. Popular protests against Ennahda’s rule erupted in the wake of the assassination of leftist politician Chokri Belaid in February 2013, with political and ideological disagreements between the two main student unions resulting in violence within universities in Sousse, Manouba, and Kairouan, according to Ziad Khaloufi, a member of the executive office of UGET. These tensions show degree to which student unions remain a part of the political conflicts that occur outside the universities.

The Student Academic Council elections for the 2013–2014 academic year, held on April 18, 2014, renewed UGET’s role as opposition to Ennahda’s rule. UGET won nearly 65 percent of the council’s overall seats, coming out ahead of its Ennahda-affiliated counterpart. UGET achieved significant gains in six out of thirteen public universities—namely Sousse, Kairouan, Gafsa, Manouba, Tunis, and Manar universities—winning more than70 percent of seats at these campuses. UGET activists celebrated these election results as evidence of Ennahda’s decline in popularity and the Tunisian desire for political change.

Yet violence returned in the run up to the second round of the presidential elections, exacerbated by party politics at the national level. A delegation from the Islamist UGTE visited presidential candidate Moncef  Marzouki on October 25, raising suspicion that UGTE would campaign for Marzouki at universities. On December 4, UGTE organized an event to commemorate the death of union leader Farhat Hached in the Faculty of Arts at Manouba University. The group clashed with UGET activists, who accused UGTE of campaigning for Marzouki’s presidency and insulting the late leftist leader Chokri Belaid. UGTE denied these allegations and accused UGET of using violence to prevent it from holding the memorial. The clashes left a number of students from both sides injured and each politicized union placed responsibility for this violence on the other. Controversy and polarization among the Tunisian public further increased when Nidaa Tounes candidate Beji Caid Essebsi accused his opponent Marzouki of relying on the support of Ennahda, Salafi-jihadis, and the Leagues for the Protection of the Revolution, all of which he considered violent parties. In response, Marzouki supporters and Islamists took to the streets in protest in several Tunisian cities.

The widening  political polarization, exacerbated by the behavior of political parties and other student unions, also brought the UGET and students affiliated with Nidaa Tounes together to oppose to Ennahda supporters in April’s student Academic Council elections, based on their commitment to a secular nature for Tunisian universities. This defensive alliance between the UGET and Nidaa Tounes will hinder any meaningful role for the student union to practice political opposition in the future. The union would not be able to oppose the coming government without strong justification, such as disregard for the Tunisian constitution or attempts to curb the independence of Tunisian universities—neither of which are likely to occur. UGTE  will not likely immerse itself in a political role, given that Ennahda’s significant  numbers in the coming parliament will allow it assume the role of a strong opposition instead. This dynamic should pave the way for unions to focus on campus issues and strengthen the independence of universities.

As such, UGET is heading toward the end of its political role as opposition for the first time in decades, focusing its action on student issues. In the wake of parliamentary elections that allowed for a balanced range of political forces to take power, the coming period will test the viability of this separation of union and political work. It has already met limited success: the minister of higher education had originally scheduled student elections for November 13, 2014, the same time as campaigns were running for Tunisia’s presidential elections. UGET objected to this schedule and succeeded in pressuring the government to postpone student elections for a later date so as not to draw the universities into the political dispute. The leaders of the leftist UGET preferred to prioritize a unionist, student-based role to reach agreements with the executive agencies on funding and solutions to problems facing university education. With the support of its members, UGET seeks to formulate alternatives to existing policies linked to student interests—especially those giving students the right to study for a fourth year if they fail repeatedly, expanding student scholarships, and granting the right to university housing. Political disputes and the volatile transitional process hindered previous attempts to reach these goals. After the elections, student issues and problems associated with university education will likely govern UGET’s relationship with the new Nidaa Tounes government.

Meanwhile, the Ennahda-affiliated UGTE has been even less concerned with Tunisian political affairs since 2011. Despite the involvement of union members in supporting presidential candidate Marzouki, the union denies any official ties to his campaign. The union has focused its efforts on building its organization, announcing in December 2013 that it had received legal permits from the ministry of higher education to operate. While there are no strong indications that UGTE has changed its position on pursuing a political role, Ennahda’s transition to the formal opposition could change the way the union deals with politics.

Tunisia’s transition has opened up the public space, allowing students from political movements and parties to express their opinions directly. As such, Tunisia’s student population no longer needs to use student unions as a back door to political activity. In order to defend the interests of all students, union structures must now maintain their distance from political and ideological disputes and completely renounce the use of violence. The two main unions could sign a joint document recognizing the diversity of student organizations and rejecting violence, both during student election campaigns and student activities. Political movements and parties must also help neutralize student unions’ political role, strengthening membership in their own groups and encouraging the development of formal political institutions.

There is an urgent need to strengthen the environment of union work within Tunisian universities to ensure freedom of association, assembly, and demonstration without restrictions, in the framework of respecting the pluralism of student organizations. If Tunisia hopes to achieve the most for students, its unions must put aside partisan differences and work toward their common goals.

Mohamed Abdel Salam is a researcher for the Association for Freedom of Thought and Expression in Cairo. The views expressed are the author’s own and do not reflect the views of the Association.