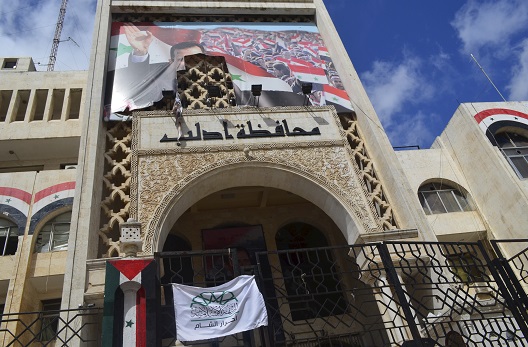 Last weekend, international headlines blared that Jabhat al-Nusra, the Syrian branch of al-Qaeda, had captured the northern Syrian city of Idlib from Assad regime forces. Idlib was once a major hub for pro-democracy protests and for protests in support of the US-endorsed Free Syrian Army. With a pre-war population of 165,000 and even more internally displaced people today, Idlib became the largest city to change hands anywhere in Syria since rebel forces left Homs in May 2014. While some may see the victory in Idlib as a loss to extremist forces in Syria, the reality on the ground actually provides an opportunity to support pro-democratic forces more closely aligned with Western thinking.

The expulsion of regime forces from Idlib constitutes a major development on the Syrian battlefront. It constitutes a major defeat for the Assad regime, which has also lost ground in Syria’s north and south in recent weeks. However, the headlines that say Idlib was “captured by al-Qaeda” do not tell the full story of what really happened there.

Let us start with the basics: Last Tuesday, a new coalition of hardline rebels called Jaish al-Fatah began a three-pronged assault on the northern city of Idlib. Within two days, they had reached the gates of the city from its northern and eastern entrances. By Saturday, they were in full control of the city. Yes, Jabhat al-Nusra was indeed a member of this coalition, but six more groups also took part in the offensive: Ahrar al-Sham, Jund al-Aqsa, Jaish al-Suna, Filaq al-Sham, Liwa al-Haq, and Ajnad al-Sham. While most of these groups are Islamist, they are not al-Qaeda.

Jabhat al-Nusra was a significant contributor in the offensive, but it was not the dominant actor. Out of the 6,000 Jaish al-Fatah fighters who joined the capture of Idlib, only 1,500 came from Nusra, and the vast majority were locals from northern Syria. Ahrar al-Sham amassed an even larger number of fighters, and its commander came from a suburb only 15 miles away.

Now that the Jaish al-Fatah has successfully captured Idlib, signs so far suggest that Nusra will not dominate the new local government. Jaish al-Fatah has announced that a civilian local council will now govern Idlib after a short transition phase. The transitional council will assign seven seats to Ahrar al-Sham, four to Nusra, and the rest to other groups. Assuming fifteen to twenty seats in total (as is typical for local councils), Nusra will control at most a quarter of the seats. Abu Muhammad al-Jawlani, the head of Nusra, endorsed this arrangement when he said today “We are not keen on monopolizing power in the city [of Idlib]… We will enforce God’s law through a consensus government.”

As the Easter holiday approaches, it is worth noting that Idlib still contains a small Christian community. Local Christian residents have reported that all clergy are safe, that no churches have been defaced, and that rebel leaders have assured them they can celebrate Easter unmolested. Jaish al-Fatah has even offered stepped-up patrols to defend the Christian quarter. Christians in Idlib are indeed in immediate danger, but not from Jaish al-Fatah; on Tuesday, the regime bombarded Christian areas of Idlib and caused significant property damage.

It is true that hardline groups whose goals do not match those of the Syrian revolution led the capture of Idlib. This is most regrettable and causes unease among many Syrian activists. Due to Nusra’s prior history of attacking democracy activists, seeking monopolies on power, and favoring accommodations with the Islamic State (ISIS or ISIL), Idlib still faces a period of substantial dangers in which radical extremists could take root. While Nusra now fights against ISIS with the rebels in Aleppo, Nusra is also assisting ISIS in its offensive on the Yarmouk Camp of Damascus according to local activists. There is a real danger that Nusra’s capture of Idlib could give ISIS an opening.

However, these dangers could have been avoided if the United States had supported the Free Syrian Army in Idlib when it was strong. Instead, the United States cut support to the moderate Hazzm Movement as Nusra attacked the group. It offered no airstrikes in support of moderate anti-ISIS rebels like Hazzm, even as it bombed rebel areas to attack Nusra, causing civilian casualties. Consequently, the Hazzm Movement in Idlib was overrun and civilian casualties from airstrikes triggered a popular pro-Nusra backlash. Had the United States offered robust support, it could have been the Free Syrian Army expelling Assad from Idlib last week.

As things stand, I must admit begrudgingly that Jaish al-Fatah has fulfilled many goals of the Syrian revolution in Idlib, thereby claiming a greater share of revolutionary legitimacy. The expulsion of Assad forces caused celebration inside Idlib and across opposition areas, including areas known for their moderation and for pro-Western tendencies. The aftermath of Jaish al-Fatah’s victory included moving scenes of prisoners freed from Assad jails and local rebels rejoining their families for the first time in years. The Free Syria flag flies on Idlib’s Central Clock Tower again for the first time since the initial pro-democracy protests.

Local Syrians joined Jaish al-Fatah to witness these scenes, not out of zeal to turn Syria into an Islamic theocracy. However, because these scenes were brought about by a hardline rebel group such as Jaish al-Fatah  the capture of Idlib also represents a defeat for pro-Western groups such as the Free Syrian Army and Etilaf, who tried for years to achieve this outcome and failed. If the United States cares to maintain its influence and combat extremism in northern Syria, it must learn from previous mistakes and undertake real efforts to bolster Syrian moderates.

Despite partially falling under Nusra’s administration, Idlib need increased US funding to support local pro-democracy organizations. If Jabhat al-Nusra can acquire a monopoly on social services, it will gain many more recruits and cement its vision of adding Idlib to its “emirate.” Allowing pro-democracy organizations to compete for this space would likewise result in increased support to the benefit of all those supporting a civil order in Syria. The United States has a stake in ensuring that moderate civil society groups provide too many valuable services to be ignored or shouldered aside.

What the United States should not do now is give up on the north due to the prominence of Jabhat al-Nusra and other hardline groups. In late 2013, ISIS as well appeared dominant in Aleppo and Idlib. But in early 2014, locals turned decisively against ISIS with mass protests across opposition areas of Syria, and the largest rebel groups followed suit soon after. Within a week, ISIS was on its way out in northwestern Syria. It has not recovered its influence there since.

By working to strengthen moderate civil society groups in Idlib, and by supporting moderate rebels across northern Syria, the United States can provide an opening for local Syrians to reject extremism for democracy at some point in the future. The alternative—pulling back so that extremists dominate and so that ISIS might eventually find an opening—is really no alternative at all.

Image: A defaced poster of Syria's President Bashar al-Assad is seen as the flag of Ahrar al-Sham Islamic Movement hangs on the fence of the Police Command of Idlib province building, after Islamist rebel fighters took control of Idlib city March 30, 2015. Islamist groups including al Qaeda's Nusra Front have seized the city of Idlib for the first time in Syria's civil war, fighters and a monitoring group said on Saturday. (Reuters)