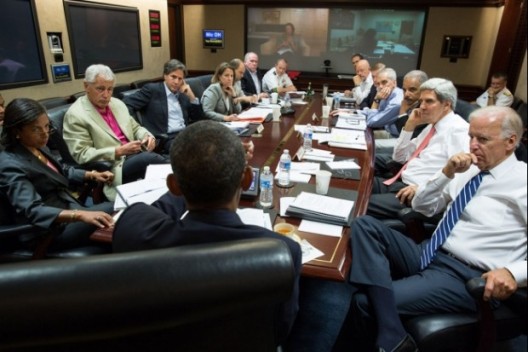 It is understandable that many in Congress have grave reservations about authorizing President Barack Obama to use military force in Syria. It is equally understandable that the president, for so long, tried to hold Syria at arm’s length as the Assad regime slaughtered civilians and put American friends and allies in the region in grave jeopardy. It is all understandable. Yet it is all wrong. The arm’s length approach has produced consequences for Syrians and their neighbors every bit as dire as they are unintended. It has also raised profound questions at home and abroad about the role of the United States as a force for law and stability in the world. Denial of this authorization would complete the shredding of American credibility around the globe, leaving allies and adversaries alike wondering if the word of the United States is good for anything at all.

There is no doubt that most Americans are neither riveted by events in Syria nor persuaded that the United States should apply military measures to deter and prevent the use of chemical weapons, mitigate the suffering of Syrians, protect allies and friends, facilitate the ouster of a regime addicted to terror, and enable a replacement representing non-sectarianism, inclusiveness, reconciliation, and reconstruction. Why, they ask, should this be our job? Some of their representatives in Congress are content, at present, to mirror this sentiment and vote accordingly. Surely presidential leadership is the essential antidote to this paralysis. As Samantha Power has observed in her study of past American reactions to mass murder in faraway places, the default position of Congress, the public, and even presidents is one of disinterest; that the exercise of leadership from the top is always needed to turn things around. Presidential leadership surely cannot turn the shameful “let Allah sort it out” end of the spectrum. But it can persuade thoughtful, voting Americans to grant their representatives in the House and Senate a degree of discretion in enabling the president to preserve the reputation of the United States.

It is likewise understandable that many in Congress are instructed in this matter by the experience in Iraq. We should be honest in acknowledging that the Iraqi episode will, for decades to come, raise questions about the efficacy and worthiness of American leadership abroad, particularly when the use of military force is contemplated. Yet Democrats in particular need to think hard about the applicability—or lack thereof—of the Iraqi situation to the current crisis in Syria. Do they really imagine that President Barack Obama intends to invade and occupy Syria? Do they suspect that there exists a Syrian Ahmad Chalabi promising a “cake walk” to the credulous? Do they truly believe that a determined military campaign aimed at destroying or significantly degrading the ability of the Assad regime to use explosives—chemical and conventional—for mass murder and terror leads inexorably to American ownership of Syria’s revolution? Having thought about it carefully, have they concluded that this president—given his history with regard to Syria over the past two years—needs to be shackled lest he lead us into World War III?

There are, to be sure, other issues that weigh on the minds of those reluctant to support the president in the wake of the regime’s chemical atrocity. First and foremost, thoughtful members of Congress want to see the overall strategy in which prospective military strikes would be embedded. This is right and proper. The administration has consistently resisted and avoided a disciplined process of identifying national security objectives in the Syria context and crafting a strategy for their achievement. Those days are over. Congress ought to be convinced they are over.

Members of Congress are likewise interested in understanding the nature of the military mission they are being asked to approve. The essence of the draft resolution of authorization is to “prevent or deter the use or proliferation” in or from Syria of weapons of mass destruction. The surest way of achieving that objective would be to eliminate the regime’s massive holdings of the materials in question—something that would be somewhere between very hard and impossible to do. Prevention of use within Syria can probably best be accomplished by focusing on delivery systems: artillery, missiles, rockets, aircraft, and support facilities. A serious attempt to accomplish the goal set forth in the resolution would require far more than a shot across the bow or a pinprick. There would have to be a concerted effort to significantly maul the regime’s mass murder machine. A serious campaign to this end may not require sixty to ninety days to implement. Neither, however, would it be a twenty-minute operation resulting in a plume of smoke out in a trackless desert. Although operational details should be tightly held by an administration that leaks like a sieve, Congress needs to know that the operation being contemplated is not symbolic in nature—if indeed it is not.

Finally, some in Congress are concerned about the potential effects of a military operation on the struggle for Syria itself. On one side of this debate are those who want the operation very explicitly to tip the scales against the regime: to facilitate negotiations in the view of some, or to accelerate the regime’s military defeat in the view of others. On the other side are those who, quite frankly, put credence in the principal message being propagated by the Assad regime and its supporters: that if the regime comes down, al-Qaeda will rule Syria, and Syrian minorities will face pogroms and massacres.

Perhaps it is worth stipulating that Syrians themselves are fully responsible for the outcome of this revolution against corrupt, incompetent, and brutal clan rule. Motivated by the egregious erasure of a presidential red line by Bashar al-Assad and his confederates, President Obama and his advisors must now consider the scope and duration of a military operation whose objective centers on deterrence and prevention. Destroying to the maximum extent possible the Assad regime’s tools of terror is by far the most reliable way of achieving the objective. If a regime stripped of the means it has used to murder tens of thousands of civilians while stampeding millions from their homes finds itself suffering certain disadvantages in the aftermath of US military strikes when faced with armed opponents, so be it. The president’s objective, however, is to deter and prevent. He can best achieve it by going to the root of Syria’s humanitarian catastrophe by removing, to the extent possible, the tools of terror used by a heartless regime to murder with munitions that are both chemical and conventional in nature.

Although the specter of al-Qaeda rule is something trumpeted by the Assad regime for its own interests, the failure of the United States to adequately support the mainstream, Syrian nationalist armed opposition has certainly facilitated the presence in Syria of Assad’s enemy of choice. Senators McCain and Graham have indicated that the administration has turned a corner in correcting this deficit. Syrians are responsible for the outcome of their own revolution. Congress should support efforts aimed at ensuring that the United States and its partners support those opposition elements actually fighting for Syria and its people. The Assad regime and the al-Qaeda elements it has supported in Iraq for well over a decade are partners in an effort to destroy Syria and destabilize the region.

Congress has a right and duty to understand what the commander-in-chief has in mind for Syria, not just in terms of a military operation, but in the context of US national security objectives and strategy. Those in Congress who have either lost faith in the ability of the United States to do right with the application of military force, or who never had it, will probably vote no: Democrats and Republicans alike. Those who believe the credibility and reputation of the United States are either not at stake in this instance or do not matter in any event, will probably vote no. Those whose eyes have been closed tightly over the past two years will seek, in a totally counter-intuitive manner, to shackle a president whose real challenge will be to do enough militarily to achieve the desired objective. If the authorizing resolution fails, allies and adversaries alike will be drawing conclusions about the United States that John F. Kennedy and Ronald Reagan would join forces to prevent.