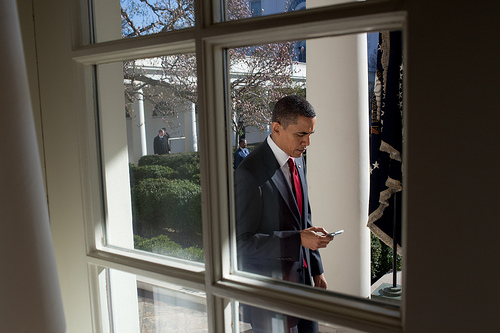 A friendly discussion about Syria with a former US State Department colleague gave rise to a point I will not soon forget. “Fred, there’s no time for policy deliberations about Syria or anyplace else. We live in the era of Blackberry diplomacy. We react and we improvise as best we can.”

Anyone under the age of thirty reading the above would probably think, “Why in the world is the US government using the Blackberry?”  Those who turned thirty long before the end of the last century—even those of us who try seriously not to be technological Luddites—wonder sometimes if the communications revolution and the 24/7 news cycle it has spawned will end up doing more harm than good to the progress of civilization and well-being of the republic.

Those who have had the privilege and burden of working in the US national security establishment are well-acquainted with how hard it is to find time to think. This was true long before the advent of email and other forms of electronic communication. Although there may have been times when officials could contemplate great matters of state at something approaching leisure, those days have been long gone. Even offices created expressly to explore policy options stretching beyond a twenty minute horizon—the State Department’s Policy Planning Staff comes to mind—routinely get pulled into the maelstrom of daily struggles to manage breaking developments through some combination of strategic messaging and diplomatic demarches. Email makes it easy for officials up-and-down the chain to plunge into the fray, battling to mold language for use at a daily briefing; language that all-too-often mystifies or misleads foreign listeners who hang on words from the podium as if they are meant to convey the results of deep, deliberative thought on the part of the world’s only superpower. Yet email neither created the problem nor prevents its solution.

The problem is the failure of government, certainly in the context of Syria and likely in other foreign policy contexts as well, to wrap the daily news cycle food fight in an insulated casing of objectives and strategy clearly understandable to those charged with planning and executing foreign or national security policy. There may be some who believe that objectives and strategy are just so 20th century; so Brent Scowcroft-like and so pre-Twitter. There may be some who actually handle affairs of state in ways they would not dream of applying to their personal financial portfolios. Perhaps resistance to structured, deliberative processes producing objectives and accompanying strategies is a function of fewer and fewer people in the national security establishment ever having availed themselves of military service; an experience where matters of this nature become, through training and education, as natural as breathing. Perhaps in the specific case of Syria there has been a temptation to avoid the hard choices such a process would serve up in the hope that the regime of Bashar al-Assad would just go away, thereby making hard choices someone else’s problem.

The arrival of a new assistant to the president for national security affairs is an ideal opportunity to restore best practices to the national security apparatus. To her credit, Susan Rice appears to be reaching out with this very much in mind. If changes are made that better serve the president by forcing people to think through policy options in the context of objectives and strategies, those changes should not reflect poorly on the stewardship of her predecessor. The president gets precisely the national security system he mandates and deserves. He is, as JFK noted in the immediate wake of the Bay of Pigs fiasco, “the responsible officer of government.”

In the end it is the president, and not the Blackberry or some other device, who will drive the direction and processes of foreign policy and diplomacy. It is up to him to tell his national security advisor that he wants the interagency to stop tweeting and start thinking; to tell him how he should be evaluating US national security objectives with respect to Syria (for example) and strategy options aimed at accomplishing them. This kind of deliberative process will not require people to wear powdered wigs and inscribe talking points on parchment with quill pens. It will not even oblige them to disconnect electronically.

Perhaps the biggest obstacle to an orderly national security process that is deliberative is the sheer brainpower of the people sitting atop the bureaucratic pyramid. Barack Obama and Susan Rice are among the very brightest people to serve in the US government. They may think they can figure Syria out themselves, within a small circle of trusted political advisers. They may think they can handle Syria without reaching beyond their own national security staff, without probing deeply into the Departments of State, Defense, the intelligence community, and elsewhere where additional expertise resides. They will outsmart themselves if that is the approach they choose.

Blackberry diplomacy is a choice, not a device decision and certainly not a fact of life. Even in this day and age, it is possible to figure out what one wants and how to go about getting it: even in government work.

Frederic C. Hof is a senior fellow with the Rafik Hariri Center for the Middle East.