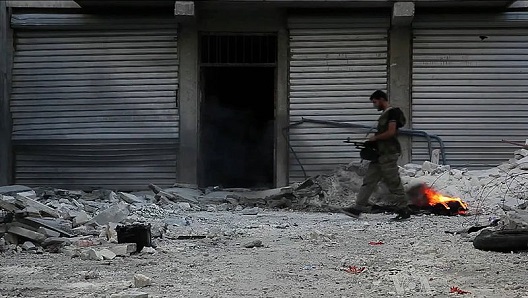 The Obama administration and its Secretary of State take pride in achieving, with the cooperation of Russia, a chemical weapons framework agreement and a supporting United Nations Security Council resolution. Both documents aim to control and destroy the chemical weapons arsenal of the Syrian Arab Republic. Those who question the handiwork of Moscow and Washington do not fault the deftness of the diplomatic endeavor. Rather they argue that a patient suffering from untreated and even misdiagnosed cancer has had his appendix skillfully removed. The operation was a success. The patient is suffering and dying.

A Syria stripped of its militarized toxins will be a Syria far less dangerous to its own people and its neighbors. Yet if, a year or 18 months from now, Bashar al-Assad is still in power in all or part of Syria, the Syrian people and those in surrounding countries will, if current regime practices continue, be in immeasurably worse shape than they are today. Assad and his colleagues have made good on the implicit threat of clan-based, sectarian rule seeded in 1970: try to uproot us and we will burn the country. They miscalculated in using chemical weapons. But, with Russia’s help and Washington’s acquiescence, they have deferred accountability. The regime has returned to its practice of meting out death and destruction to civilians through conventional means, and there appears to be neither the will nor even the interest to stop it.

One may hope that the spectacle of the Assad regime being forced to disgorge a pile of poison supposedly accumulated as a poor man’s deterrent against Israel may inspire a critical mass of well-placed Alawites to move, at last, against a clan that regards Syria as its personal property. Surely the Assad’s and Makhlufs are more trouble to Alawites—for whom they did precious little in a decade of pre-revolution rule—than they are worth.

Indeed, the clan’s gratuitous excesses against civilians living in rebel-held areas are well known to all. Sadly though, it appears that the regime’s guilt-by-association hostage-taking strategy is working. It does so with a critical assist from Western doubt, denial, and indecision, leaving Syrian nationalists with their noses pressed to the glass while the doors and windows of Syria have been thrown open to jihadists and foreign adventurers. The result is that Syrian minorities, disgusted with the regime, are terrified by extremists abetted by the regime and advertised as the only alternatives to Assad’s corrupt, criminal rule.

So what now? President Obama called on Assad to step aside in August 2011. One prays that the chemical attack of August 2013 has not, by virtue of American and Russian diplomacy, made Assad an irreplaceable party to a long-term contract covering the disposal of chemical weapons. Yet if it has, what assurances has the United States obtained that the regime, with its chemical weapons holstered, will not continue to set upon civilians with conventional shells, bombs, and warheads? The regime, after a brief post-August 21 hiatus, has gone back to business as usual with massed fire terror attacks.

Those who have opposed arming, equipping, and training Syrian nationalist forces now have an additional arrow in the quiver thanks to the appearance of enhanced status for Assad. Previously the rationale for starving moderates while the two codependent extremes—the regime and the jihadists—enjoyed an all-you-eat smorgasbord of arms and money had several facets. The Syrian situation might become further militarized; there can be no military solution; only negotiated compromise can produce a stable peace; civilians might become endangered; arms might end up in the wrong hands; and today’s moderate might grow a beard in a month. Now there is another excuse to look the other way as the carcass of the Syrian state is devoured by sectarian jackals: Assad must remain in power to exercise control over chemical stockpiles and make good on what Russia and the United States have agreed; therefore, whatever is given to Syrian nationalist rebels must, at the most, be enough to check a box but too little to make a difference. This, sadly, will be the inevitable argument. It may even be American policy.

Most Syrians are at the point where they simply want the carnage and terror to stop. Even those who have escaped death and evaded flight have felt the effects of an imploded economy, one that has no prospect of resurrection so long as the Assad regime is in place anywhere in Syria. And yet most Syrians could probably see their way clear, albeit with noses pinched, to Bashar al-Assad staying in his palace playing with his iPod until mid-2014 (when the chemicals would be fully destroyed) if only the murder and mayhem would just stop.

The problem, however, is twofold: the regime feels perfectly free to target civilians with anything other than chemical weapons; and Assad indicates he intends to stand for reelection in 2014—a controlled plebiscite he cannot lose. These facts are known to the Obama administration. Unless the regime can be persuaded or compelled to change its behavior with respect to mass terror and political transition, President Obama will have created yet another unintended consequence, one compounding the July 2012 decision against arming moderates: he will have facilitated Russia’s objectives of barring US military intervention for humanitarian relief purposes while enabling the Assad regime to resume in full its targeting of civilian populations so long as chemicals are not used and the United Nations receives full cooperation in their control and destruction. He will also have undermined, quite unintentionally, any prospect of a negotiated settlement. What, therefore, should be done?

The first priority is to stop the slaughter. This should have been the top priority long before August 21. It was not. President Obama had his Srebrenica moment on that date, when chemicals were used. He should have responded with sustained, targeted lethal strikes against regime delivery systems—aircraft, artillery, rockets, missiles, and all associated support facilities—just as soon as he was in possession of the pertinent facts. Had he done so he would have saved tens of thousands of lives. He could have explained to the American people and the United States Congress that he had warned the regime, and that no one crosses an American red line and gets away with it. He very likely would have basked in public approval.

Now, however, a self-imposed chemical barrier constricts action and perpetuates the peril of at-risk populations. Two complementary courses of action seem appropriate: lean hard on Moscow and Tehran to get their client under control, thereby making a Geneva peace conference conceivable; and give the US Department of Defense, in coordination with other departments and agencies of government, the mission of arming, equipping, and training a sizable force of Syrian nationalists capable of defending, seizing, and holding territory.

Moscow may have neither the inclination nor the ability to lean on its client to stop the shelling and bombing of residential neighborhoods. Now that direct communications have been established with Iran, perhaps it could be persuaded to tell Assad to knock off the gratuitous terror. Tehran was reportedly shocked by the regime’s Saddam-like resort to chemicals, although it is hard to imagine Quds Force operatives in Syria having been taken by surprise. After all, when it comes to defenseless civilians the regime will, if left to its own devices, do what comes naturally. Yet those who support it militarily surely understand that military targeting plays no role in how regime artillery and aircraft are employed.

Arming, equipping and training must be accompanied by firm arrangements concerning chemical weapons depots seized from the regime. If the United States is unwilling militarily to engage regime delivery systems, no matter the size and horror of atrocities so long as they are not chemical in nature, then the nationalist opposition should be given the means to do the job. This means MANPADS, heavy mortars, and anti-tank weapons.

Finally, to keep the chemical weapons accord from becoming a murderous political cul-de-sac for the people of Syria, the United States and its London 11 partners simply must get serious about promoting a governmental alternative to the Assad-Makhluf clan. As matters now stand the Obama administration and Jabhat al-Nusra agree on one point: the interim government designated by the Syrian National Coalition is not worthy of recognition. Fine: let us enable armed Syrian nationalists to carve out safe zones in liberated Syria where a government comprised of non-sectarian Syrians who have stood up to the regime and the regime’s jihadist enemies of choice can form a government inside Syria, one that the Friends of the Syria people can recognize, support, and help defend. There will be no credible alternative to Assad otherwise.

The chemical weapons understanding reached by the United States and Russia and endorsed by the United Nations Security Council will be a force for good only if it leads to something bigger and better. Yes, a Syria stripped of chemical weapons would be positive. Yet if the process associated with achieving this laudable end unintentionally—at least on the part of the United States—facilitates the ongoing murder of innocents and the agonizing death of a country, those Americans who worked skillfully and with the best of intentions will rue the day they put pen to paper. So will 23 million Syrians and all of their neighbors.