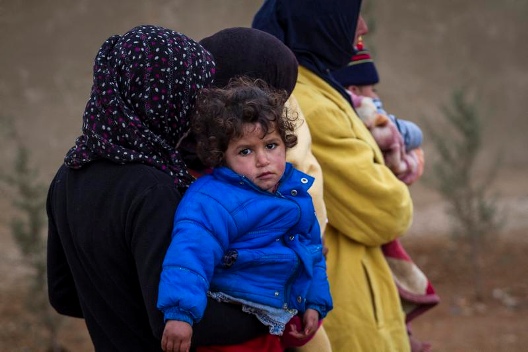 The suffering of Syrians inside their tortured, broken country is unspeakable.  Even those not yet driven from their homes or banished by fear from their country of birth cannot escape the consequences of pure evil unleashed.  In recent days a young woman from the family that hosted me in Damascus as an exchange student eons ago witnessed a mortar round tear human bodies to shreds in front of her very eyes, in a Damascene Christian quarter. She was unharmed physically.  Yet the images of the dead and dying will be with her until her own dying day.

What did the murdering assailant, presumably a rebel, think he was accomplishing by the gesture?  At least Bashar al-Assad’s regime has had an objective (preserve the clan’s dictatorial rule in at least part of Syria) as it has commissioned indiscriminate slaughter through stand-off bombardments, block-by-block massacres, mass incarceration, and systematic torture.  No doubt the regime’s sectarian survival strategy has sought to provoke precisely the kind of response whose sanguinary effects will accompany my young friend forever.  To target Christian neighborhoods with mortars and car bombs, regardless of the motive, is to serve the regime and to honor its methods.

For thirty months this regime has, with deliberation and discipline, all but destroyed the very idea of a Syria for Syrians.  Knowing it could not withstand peaceful protest, it destroyed it.  Knowing it could not rely on its army as a whole to persecute protesters and pursue those who took up arms in self-defense, it unleashed its special units and its criminal auxiliaries, injecting the poison of sectarianism into the country’s bloodstream.  Knowing it could not win against a population rejecting sectarianism, it did everything in its power to encourage and enable raw sectarian hatred in the ranks of its opponents, even releasing violent Islamist extremists from prison.  In this profoundly evil endeavor it has received incalculable support mainly from the Gulf, where sectarian primitives took the poisoned bait offered by the regime they hated and, by so doing, prolonged the existence of that which they considered to be abominable.

What can the United States do about this lamentably abysmal situation?  Americans bring to the art of diplomacy (and almost everything else) the engineer’s conviction that problems exist to be solved.

Secretary of State John Kerry embodies this predisposition, this public display of American civic DNA.  It is something in which Americans can and should take pride; it is a predisposition that, when applied politically by the likes of George Washington, Abraham Lincoln, and Franklin Roosevelt, has established and preserved the country.  Kerry looks at the chaos that is Syria and seeks the formula that would bring order.  He seeks the right formulae for Israelis, Palestinians, and Iranians as well, but the raw murderousness unleashed in Syria by a ruling family and enabled by foreign opponents too blind to know they were taking poisoned bait may be beyond the skill of an accomplished, optimistic engineer to understand, organize, and solve.

There are sound reasons for the United States to care deeply about what is happening to Syria.  Although it was a chemical atrocity and the “in your face” defiance and contempt it conveyed that motivated President Barack Obama to take a series of unusual, unpredictable actions, the human catastrophe visited on Syrians and their neighbors cries out for humanitarian intervention, even military.  The emerging partition of Syria between a state sponsor of terror and terror itself simply cannot be permitted to stand, unless the West and its regional allies and partners think they can simply ride out decades worth of criminals feasting on Syria’s carcass while they mount operations where they please and where they are able while obliging decent Syrians to choose between unprotected misery at home and the semi-protected misery of exile.

Most Americans probably think Syria is not their problem, and will probably persist in that belief until fellow Americans in noticeable numbers die as a result of Assad’s handiwork.  Only one American is now positioned to change, or at least try to change, that consensus view.  Yet he seems instead to share in it.

President Obama has commissioned Kerry to perform a diplomatic miracle: convene a Geneva peace conference that compels the Assad regime, basking in Iranian and Russian support as it consolidates itself in the only part of Syria it deems important, to step aside in favor of a transitional government that would exclude it entirely.  He who is being carried to victory by foreign forces in western Syria will, with the encouragement of Russia, the acquiescence of Iran, and the permission of his own family, gracefully yield power for the good of the country.  And the Syrian opposition, pounded unmercifully and embracing fragmentation as a survival technique, will do its statesmanlike part by asking serving ministers of government and retired security VIPs from the regime of Assad the Elder to join in a transitional governing body reflecting true national unity and reconciliation.

Geneva cannot work in late 2013 as it was designed in mid-2012.  It may not have worked then, even if the P5 had not squandered their momentary unity on a useless United Nations Security Council fight.  In 2012 a diplomatic tour de force of the James Baker variety, heavy in concentrated, personal, and retail human interactions, would have been required just to gain traction.  In 2013 there is little or nothing left with which to work, even for someone with the energy and engineering instincts of John Kerry.

The operative cliché of the Syria crisis is that there is no military solution.  Yet if there is to be a diplomatic solution it will inescapably be shaped by men with guns.  Those who plead “tell me the end state” and demand a clear path to a decisive military result before seriously trying to arm, train, and equip people willing to fight for Syria and normal Syrians are inadvertently but efficiently burning the bridge to diplomacy and consigning the planet to a poisonous gift that will keep on giving for decades.

It is arguable and probably true that most Syrians want to take their country back from the rapacious crime family and the bearded clowns with machine guns. Just who, in a country swimming with arms in the hands of bad actors, will fight for them?  Is it beyond the ability of the United States and its partners to do something positive in this regard, even if it falls short of being a silver bullet or a panacea producing instant gratification?

And is it beyond the ability of the regional actors – Turkey, Iran, and Saudi Arabia come to mind – to start exchanging ideas about saving a country whose destruction will harm them all?  Can there be a solution for Syria without regional consensus and buy-in?

For Iran to play a positive role—beyond encouraging its client right now to cease and desist with human rights worst practices—a nuclear deal may be the sine qua non.  This is because it knows the Assad regime alone will sacrifice Syria’s national security interests for the sake of Hezbollah, Iran’s first line of defense against a potential Israeli attack.  Tehran will, for sure, continue to support Hezbollah politically long after the threat from Israel is gone.  But will it need to continue to prop up people in Syria for whom it has no respect, people who it knows used chemicals against defenseless civilians?

Can Saudi Arabia find geopolitical value in a solid Iran nuclear deal?  Can it come to appreciate that Syria is more than a battlefield on which Iran must be thrashed?  Can Turkey play a constructive, creative, multifaceted role in stimulating the necessary compromises, assuring Kurds and other vulnerable populations, and restoring trade links?  Can these countries work cooperatively to save Syria and spearhead its physical reconstruction?

If a nuclear deal with Iran can be reached, American diplomacy might do well to skip over the Geneva phase and work directly to stimulate a regional approach to a negotiated settlement in Syria.  Russia should be given every opportunity to contribute constructively.  The regional powers are, however, essential.  And Russia has spared no effort to twist the language of the June 30, 2012 Geneva Final Communiqué into incomprehensible shapes that would place the miracle of Geneva even beyond the powers of the Almighty.  Its motives are, to say the least, suspect.

Expectations of a diplomatic deus ex machina must be kept under control in any event.  A nuclear deal with Iran may not be achievable.  Even if one is reached, it is far from guaranteed that the agreement itself would portend anything in particular for improved relations between Iran and the West and Iran and its neighbors.  There may be no grand bargain transcending nuclear energy and sanctions.  And if, in the wake of a nuclear deal, Iran persists in its foreign fighter life support system for a reprehensible regime destabilizing the entirety of its neighborhood, Riyadh may prove in the end to be correct: Syria may have to be the place where Iran is simply beaten and, to paraphrase Harry Truman, made to like it.

There are defensible and understandable reasons why President Obama wants no part of Syria and may be tempted to declare victory once the chemical weapons agreement is fulfilled.  There are reasons of human decency and compassion for desiring, earnestly and even passionately, that this catastrophe in Syria be ended through civilized dialogue and compromise.

To be guided, however, in policy decisions, by the unproven and dubious assertion that there is no military solution for Syria is to hope against hope that diplomatic results will not be at all affected by a military situation one has not even tried to shape, much less dominate; a situation that favors a regime that has placed its own survival above all else, including the law.

Wanting a negotiated outcome reflecting compromise and promoting stability is good.  Waiting for a miracle is not.  One may simultaneously seek a nuclear deal with Iran while taking charge of the system by which Syrians willing to fight for a country – not a crime family or a pseudo-religious ideology – get what they need to attack and defend on two fronts.  It can be done.  If we want Syria to be something other than a gift in perpetuity for terrorists and their enablers, it must be done.