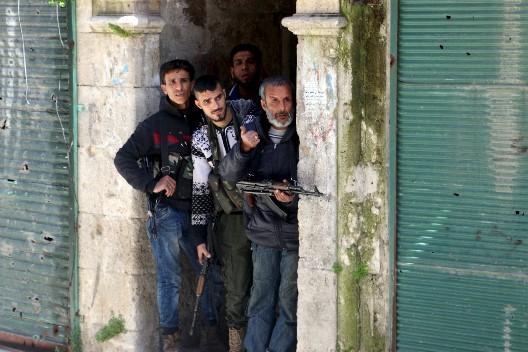 Recent tactical setbacks by Assad regime forces in northwestern Syria are reviving—for the first time since early 2013—fin du régime hopes and speculation. Reporting from the region suggests that arms transfers from Gulf powers and Turkey are enabling rebels to overcome exhausted and exposed Syrian Arab Army units. Although it is tempting to view these developments in the context of the ebb and flow of an unending conflict, the United States should take no chances. It should use the battle against the Islamic State (ISIS or ISIL) to take the diplomatic and operational lead in stabilizing Syria. It should channel regional energies in ways that defeat ISIL, isolate the Assad regime, and give Syrians a shot at legitimate governance.

In his recent interview with Thomas Friedman of The New York Times, President Barack Obama seemed to double down on a policy of subcontracting Syria’s stabilization to others. “I think when you look at what happens in Syria, for example, there’s been a great desire for the United States to get in there and do something. But the question is: Why is it that we can’t have Arabs fighting [against] the terrible human rights abuses that have been perpetrated, or fighting against what Assad has done?” The words “get in there and do something” no doubt sought to animate the president’s favorite straw man: that critics of his Syria policy want him to declare war on the Assad regime and then invade and occupy the place. In fact, what the critics—foreign and domestic—have demanded is diplomatic leadership aimed at channeling regional energies in the direction of long-term stability for all of Syria.

The Chernobyl that is Syria is not likely to be remediated in the lifetime of anyone reading these words unless the United States provides the requisite diplomatic leadership. No, this does not mean US boots on the ground. Yes, it does mean diplomatic heavy lifting that would easily exceed the capacities of a micromanaging, communications-obsessed White House staff. No, it does not mean floating the 82nd Airborne Division down onto Damascus. Yes, it does mean posting an empowered interagency task force to the region to support the work of Special Envoy John Allen.

Why John Allen? Is he not the special envoy to the anti-ISIL global coalition? He is indeed. If ISIL is to be killed and kept dead in Syria and Iraq, then the ultimate result of the coalition’s efforts must be legitimate governance in both places.

It is understandable that Tehran’s priority of effort in Iraq goes to the support of Shia militias well-versed in atrocities. In Syria, Iran supports a regime up to its eyes in war crimes and crimes against humanity. Iran under current management is an asset of incalculable value to ISIL: this is not exactly a state secret to US officials struggling to make strategy out of White House paralysis. As long as ISIL thrives and Assad persists, the seed of legitimate governance in Syria has nowhere to take root.

Is the administration truly comfortable with a division of labor that has coalition aircraft chasing ISIL in from pillar to post in Syria while regional powers take the lead in arming anti-Assad rebels? Are the results of having subcontracted large parts this activity over the past forty months such that the subcontracting itself is seen by the administration as a precursor to legitimate governance? Is the administration certain that sectarian hardliners are not on the receiving end of Gulf and Turkish largesse? Has the United States finally taken charge of who gets what in terms of arms and ammunition to Syrian rebels? Or is it turning a blind eye while preparing to implement a “train and equip” program too small and too slow to have much of an effect on anything?

Having regional states take matters into their own hands with respect to the Assad regime is not a reliable way to prepare Syria for the kind of legitimate governance that can defeat ISIL decisively. The desire of Saudi Arabia, Qatar, Turkey and others to bring down the Assad regime and give Iran the beating it so richly deserves is understandable and even admirable. But are these parties also seized with preserving and strengthening the sectarian and ethnic mosaic that is Syria? Might the presence of US diplomatic leadership providing the leavening needed to produce for Syria something other than an indigestible stone?

The Assad-Makhluf clan is a terrible burden on those Syrians who have supported it in the absence of a visible, much less attractive alternative. Likewise it is a burden to the people of Iran, ruled themselves by a regime more interested in hegemonic games abroad than civil society and economic development at home. In the end, Iran’s loss in Syria will likely be total: no self-respecting, nationalistic successor government to the crime family would willingly subordinate itself to the Supreme Leader and his Lebanese acolyte. Yet, for Syria to enjoy legitimate governance—the only kind of governance that can neutralize ISIL forever—the passing of the Assad regime must, in terms of sect and ethnicity, produce no losers in Syria. In the absence of US diplomatic leadership, are regional powers opposing the Assad regime sufficiently seized with the imperative of no victors, no vanquished in Syria?

The near-term requirements for putting Syria on a path to stability and legitimacy center on regional ground forces (in conjunction with coalition air forces) sweeping ISIL from central and eastern Syria; permitting a real government for all Syrians to emerge in free Syria; putting “train and equip” on steroids by building a Syrian National Stabilization Force; and stopping the Assad regime from visiting mass terror on civilian populations. None of it requires US boots on the ground. All of it—every bit of it—requires sustained US diplomatic effort and leadership.

The anti-Assad states of the region say it is US leadership they have lacked and desperately want. We should give it to them. By so doing we can help Syria’s large, unarmed, and fearful majority navigate around the deadly shoals of sectarianism, and thereby save their country. Syria is a cradle of civilization, not a cow to be milked and ultimately butchered by a clan or a caliph or the adherents of Al-Qaeda. If Washington is serious about destroying ISIL, it will build, lead, and implement a regional strategy to promote legitimate Syrian governance. It is simply too important a task to leave entirely to others.