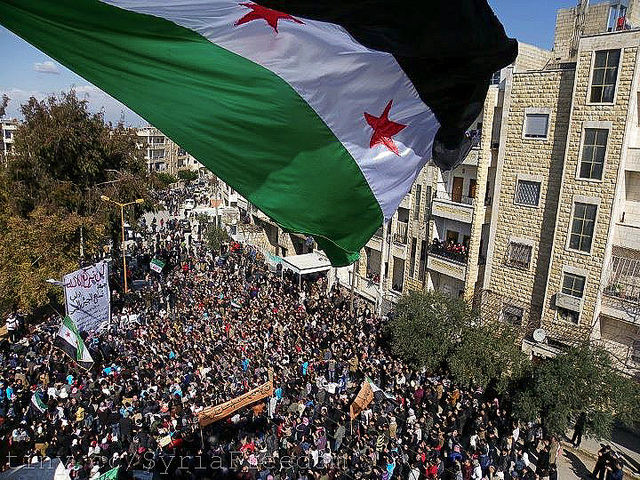 When Secretary of State John Kerry pressed his Russian counterpart in early May 2013 to help him convene a conference to implement the Action Group on Syria Geneva agreement of June 2012, his motive was honorable and straightforward: cut to the chase and get Syrian opposition and Assad regime representatives into a room to negotiate a transitional governing body for Syria, one that would replace the regime and exercise full executive power. That, after all, was the clear mandate of Geneva I: an agreement endorsed by all five permanent members of the United Nations Security Council. Kerry knew that his task would be to persuade a skeptical opposition to come to the talks without preconditions. He also knew that Russia’s task would be to persuade the regime to send negotiators empowered to create, on the basis of mutual consent, the requisite transitional governing body. Above all, he knew that the Assad regime’s calculation with respect to genuine political transition talks would have to change. To convene Geneva II without those things being accomplished would be a waste of time and effort. Thus far, the homework has not been done.

Geneva’s purpose receives short shrift in a June 11, 2013, New York Times op-ed by Javier Solana and Jaap de Hoop Scheffer, two distinguished European statesmen who share the experience of having served as NATO’s secretary general. In an essay that studiously ignores the damning June 4, 2013, report of the Independent International Commission of Inquiry on Syria and makes no mention of Iran-Hezbollah military intervention in Syria, the writers blame the United States and Europe for the fact that "Geneva II is already on the ropes." The West, they state, "must urgently step up its diplomatic maneuvering and make the ending of the conflict a priority over wider political ambitions." What is required, according to the authors, "is a real – and hitherto untested – political push by Western actors." Indeed, Russia’s recent announcements concerning new arms shipments to the regime are, according to the authors, the fault of the West: "a predictable response to Europe’s ending its arms embargo on the country and growing support in French and British government circles to supply the rebels with arms." That the Russians themselves cite existing contracts as the excuse for arming a regime deep into war crimes seems not to have struck the authors as important.

President Barack Obama and his secretary of state have done nothing to deserve the back-of-the-hand from these two accomplished diplomats, both of whom have served with honor and distinction. Obama and Kerry, along with their Western European counterparts, have gone the extra mile and invested political capital in their support of a negotiated outcome. They have done so notwithstanding the clear desire of the Assad regime and its foreign enablers for a military solution facilitated (according to the UN’s commission of inquiry) by crimes against humanity, war crimes, and gross violations of human rights law. To blame the West for a diplomatic stalemate created in the main by the Assad regime’s adamant refusal to implement the six-point plan of former United Nations and Arab League Special Envoy Kofi Annan is beyond unfair. In a practical sense, blaming the blameless will encourage the guilty–the regime and its foreign fighters–to press on the ground for the very "military solution" that these two gentlemen accuse "voices in the West" of "pushing for."

What is it about the situation in Syria that causes statesmen of this rank and quality to blame the United States and Western Europe for the poor prospects of a negotiated political transition in Syria? Are they not acquainted with the humanitarian catastrophe caused by the regime bombing and shelling populated areas with no pretense whatsoever of trying to hit military targets? Have they not heard about the armed intervention of Iran and Hezbollah? Do they know something we do not about the readiness of the Assad regime to negotiate in good faith in accordance with Geneva I? Why would their warning that "Escalation begets escalation" apply to the West if it sought to destroy the regime’s instruments of terror and mass destruction, but not to Hezbollah forces intervening in Syria at the behest of Iran? How is it that a limited military operation aimed at relieving the consequences of war crimes and crimes against humanity would strengthen the "forces of extremism, sectarianism and criminality gaining strength across the country" when those whose no-limits survival strategy, sectarian tactics, and criminal behavior have put Syria on the path to state failure while imperiling the security of the entire neighborhood? One can read the op-ed over and over and find no acknowledgement of regime culpability for the disaster that has sunk Syria and is capsizing the region. The fact that there is no civilized negotiation is, according to the authors, all the fault of the West, which allegedly has not tried hard enough to broker a political compromise. The regime, Russia, Iran, and Hezbollah all get a free pass.

The authors, of course, are the only ones who can explain the reasons for having presented such a remarkable thesis. They are not to be faulted for wanting a negotiated end to Syria’s long nightmare. And as one who contributed to the Geneva I Final Communiqué–in particular the "mutual consent" clause applying to the creation of the transitional governing body–I have a strong interest in seeing the result mandated by the agreement fully implemented. Yet these two former NATO secretaries general have put forward an entirely over-the-top argument that implicitly rejects the Kerry observation that the prospects for a peaceful, negotiated, and complete political transition in Syria require first that the Assad regime’s calculation be changed. That calculation rests entirely on an assessment of the combat situation. At present it appears that foreign fighters have tilted that combat situation in favor of the regime. The adjustment in regime calculation produced by the skills of Hezbollah fighters is not what Kerry had in mind. Yet the op-ed authors see American deliberations on how best to stem the tide of humanitarian catastrophe while changing the regime calculation as the single biggest impediment to the negotiations they seek. Perhaps they believe that starving Syrian rebels of arms and permitting the regime to do as it pleases to Syrian noncombatants will inspire thoughts of mercy and power-sharing on the part of the Assad regime and those outsiders in whose hands it has placed its fate.

Javier Solana and Jaap de Hoop Scheffer have made an important contribution to a body of Syria commentary that heretofore has featured a sense of moral equivalence between the Assad regime and those opposing it; commentary that, with thinly veiled glee, has saluted the success of the regime in attracting jihadists to Syria and in identifying those primitives as the essence of its opposition. The idea of providing arms to mainstream Syrian rebels has been rejected on the grounds that it would further militarize the situation and put vulnerable populations at greater risk, as if the regime has not militarized matters to the maximum and as if independent findings of the regime’s widespread and systematic attacks against civilian populations and (according to the independent commission), "War crimes and gross violations of international human rights laws–including summary execution, arbitrary arrest and detention, unlawful attack, attacking protected objects, and pillaging and destruction of property" are an acceptable norm. How is it people who claim to be motivated by humanitarian concerns can point with alarm to arms for those on the receiving end of these depredations while averting their glances from the atrocities of the perpetrators, concentrating on hypothetical scenarios instead of that which is right in front of their noses? Are they morally prepared to accept the consequences of the Assad regime taking more territory and human beings under its control?

The full implementation of Geneva I by a prospective Geneva II would indeed be the key to stabilizing Syria and putting the country on the path to reform and a government reflecting the consent of the governed, as opposed to the whims of a family business. It would replace the Assad regime with a transitional governing body created by negotiators on the basis of mutual consent; a body that would receive and exercise full executive power. Under current conditions it appears doubtful that Geneva II will take place in July 2013 or anytime soon. To blame the United States and the West for this sad situation while the regime, aided by foreign fighters and protected by the Russian Federation, subjects Syria and the surrounding neighborhood to a campaign of crimes against humanity, war crimes, and gross violations of international human rights law, is an outrage. At worst it is symptomatic of a West increasingly ambivalent about its own values and its appetite for hard work and sacrifice. At its best it is a good-faith effort by two distinguished statesmen to promote a negotiated outcome, but one that views the bottom line of who wants it and who does not completely backward.