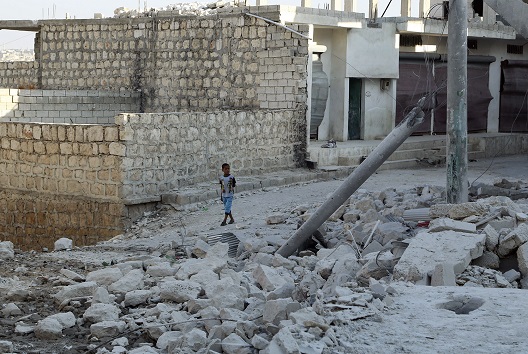 The combination of the Islamic State in Iraq and al-Sham (ISIS) running amok in Iraq and the appearance of an Assad regime military victory in western Syria have added octane to arguments that Washington should forego its step-aside guidance to Bashar al-Assad. An unnamed senior Obama administration official recently told The Daily Beast, “Anyone calling for regime change in Syria is frankly blind to the past decade; and the collapse of eastern Syria, and the growth of Jihadistan, leading to thirty to fifty suicide attacks a month in Iraq.” The senior official was wise to insist on anonymity: he or she implied that a murderous regime is part of the solution and attributed blindness to a president who, nearly three years ago, told Assad to step aside. Other analysts have gone farther, suggesting that the West work with Assad to counter ISIS and rebuild Syria. Should Washington and its allies consider cooperating with the Assad regime?

There are two aspects of the “do business with Assad thesis:” one posits that the regime has won; and the other suggests that the ISIS rampage in Iraq wipes the slate clean in terms of the Assad regime’s complicity in creating the problem to be solved. Thus, the regime’s role in the establishment of al-Qaeda in Iraq becomes yesterday’s news. The regime’s sheer brutality—serving as a magnet for ISIS and its cadre of Sunni foreign fighters -becomes irrelevant. The de facto collaboration of ISIS and the regime in seeking to obliterate Assad’s Syrian opposition may, once that pesky opposition disappears, be safely put to the side. The sheer scope of the ISIS emergency, according to this line of thinking, makes it mandatory for the West to work with the Assad regime to beat ISIS.

Indeed, the Syrian opposition is back on its heels and perhaps headed for a knockdown; if not a knockout. In Aleppo, it faces a murderous barrage of regime barrel bombs to its front and ISIS assaults to its back. Whatever Bashar al-Assad and Abu Bakr Al-Baghdadi may think of one another personally, their top tactical priority in Syria is identical: destroy the Syrian nationalist opposition to the Assad regime.

That destruction is vital to both parties. From the beginning, Assad has maintained that terrorists, top-heavy with foreign fighters, are his only opponents of consequence. By focusing his firepower on the nationalist opposition and by largely ignoring the ISIS phenomenon, he seeks to give his argument the attribute of truth and restore his value to the West. As for ISIS, exterminating Assad’s opposition opens up two possibilities: incorporating non-regime Syria into its declared state; and setting the stage for its ultimate showdown with the regime (unless, of course, it and the regime extend indefinitely their live-and-let-live arrangement).

Is the definitive defeat of the Syrian opposition inevitable and (if so), would that defeat mandate a renewal of the transactional relationship between the regime and the West?

Surely, the leisurely, disinterested attitude of the West (nominally led by Washington) makes the opposition’s prospects dim. The State Department seems at last to have dropped its rhetorical device citing the inevitable ebb and flow of battle. The ebb is one-way entirely these days, as it has been for over a year. The White House appears unmoved by the barrage of barrel bombs and has asked Congress for an opposition equip and train appropriation that cannot materialize—even under ideal circumstances—until the end of 2014. Were there a sense of urgency the president would direct the Department of Defense to reprogram a fraction of the $500 million requested to pump emergency aid now into beleaguered nationalist units. Given an element of urgency, the administration would also release a handful of MANPADS so that regime helicopters—now acting with impunity—could be taken down before unloading explosive barrels of metal on hospitals, mosques, schools, and bakeries.

Still, even if there were—at long last—a sense of urgency, it would not be easy to extricate the opposition from the two-sided assault it faces with resupply alone. As the administration struggles in Iraq with the chicken-and-egg dilemma of hitting ISIS first or waiting for an inclusive Government of Iraq to emerge, it might consider hammering ISIS unmercifully in Syria. Yes, the Assad regime, Iran, and Russia all need ISIS alive and well in Syria to help crush Assad’s opposition. Yes, they would all be quietly appalled by such a step. Yet how could they possibly object publicly or even privately to the United States obliterating key pieces of the terrorist entity they all publicly decry? If getting critical materiel to the nationalist opposition two years too late is seen by the administration as too hard to do, might it not be possible to damage one side of the pincer in which the opposition is trapped? Would not the battering of ISIS in Syria have salutary effects in Iraq as well?

Still, what if the opposition is simply crushed? Would it then be mandatory for the administration and the West to find ways to do business with Assad?

Surely, the people of Syria will need massive assistance for many years, regardless of how the war ends. If the Assad regime is left atop the ruins, Iran and Russia should take the lead in funding reconstruction: they have, after all, enabled and encouraged the homicidal regime approach to political survival that has physically destroyed much of the country. For the West, it is precisely that murderous survival strategy that would make participation in Syria’s reconstruction politically difficult and morally unpalatable if the Assad regime survives. As Stephen Rapp, Ambassador-at-Large in the State Department’s Office of Global Criminal Justice recently told an audience at the Atlantic Council, not since Hitler’s Germany has there been a regime so willing and eager as that of Bashar al-Assad to document its atrocities. Tons of documentary evidence have been secured and archived for eventual prosecution. Those who counsel cooperation with Assad should think things through very, very carefully with their own reputations in mind.

Yet would the crushing of the opposition open the door to tactical cooperation with the regime against ISIS anyway? Again, the alternative to making common cause with a criminal regime is to expedite assistance to the armed opposition now while engaging ISIS lethally (from the air) in Syria. Yet even if the opposition were to evaporate, it is doubtful that the regime would or could go after ISIS. Iran, after all, now has what it needs territorially to support Hezbollah from Syria: any willingness it might have to expend Arab Shia lives in the defense of Baghdad would not likely be replicated in an anti-ISIS offensive in Syria, unless ISIS were to move against its Syrian client. Assad’s army—reliant as it is on Shia foreign fighters to gain and secure territory—would be of little use against ISIS. Those who envision a deal with the devil should specify the deliverable that would somehow justify—in practical terms—the moral corruption and depravity of the transaction in question.

The United States has, as it has always had, the ability to tilt Syria’s tactical playing field without owning or occupying the field itself. At many points over the past two years observers, including strong supporters of President Obama in and out of government, have warned that inaction would only deepen the dilemmas presented by conflict in Syria and make action—when absolutely required—all the more difficult to implement effectively. The administration’s fear of a slippery slope has paralyzed it, even as it slides downward and headlong into the dark unknown. If acceptance of and cooperation with a regime neck-deep in war crimes and crimes against humanity should become thinkable, then the amazingly deep extent of the fall will be painfully clear to one and all.