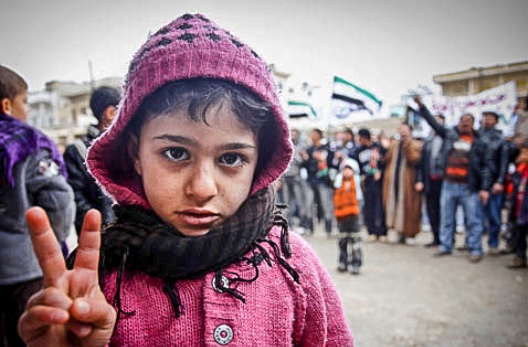 The greatest humanitarian catastrophe of the twenty-first century has unfolded before our eyes in Syria and in the countries surrounding it. As a harsh winter tightens its grip, Syrians in large numbers are dying, starving, fleeing, freezing, and crying out to the world for help. Yet as aid organizations and brave Syrian relief workers shine a light for us all on one of the greatest moral outrages in the memory of anyone now living, political leaders who could end or at least mitigate the unspeakable hardships falling disproportionately on children seem distracted. This must change. It must change now.

The primary driver of Syria’s descent into hell is the daily habit of the Syrian President Bashar al-Assad’s regime to use artillery, aircraft, rockets, and missiles against residential areas its forces do not control. The regime, with one exception, feels no sense of restraint. It knows now it must not use chemical weapons. The regime’s take-away from the US-Russian chemical weapons agreement is that it can do as it wishes to Syrian civilians so long as it does it without chemicals. It plasters civilian neighborhoods with anything metallic and everything explosive at its disposal. If the price of perhaps catching three armed rebels in the indiscriminate bombardment is thirty or 300 dead, wounded, or traumatized children, so what? The regime believes that as long as it cooperates with the chemical deal it has a free pass.

Indeed, the regime—with the support of foreign militias raised for it by Iran and arms shipments delivered to it by Russia—is stepping up its brutal assaults. Why? On January 22 there is to be a peace conference in Switzerland, one supposedly featuring talks between the regime and those who oppose it. Between now and then the Assad regime and its allies intend to maximize their military position inside Syria. They know all too well that what happens in conference rooms is influenced, if not dictated, by facts on the ground. Westerners say there is no military solution in Syria and act accordingly. Assad and his friends believe in military victory, at least in those parts of Syria that matter to them. They too are acting accordingly.

None of this was intended by President Obama’s administration last September, as it substituted a chemical agreement plus a renewed push for a peace conference for military strikes against the regime’s tools of mass murder and terror. Yet Syria today is the sum total of unintended consequences resulting from policies aimed at keeping the crisis at arm’s length. The credible threat of US military force made the chemical agreement possible. Its absence is an unintended enabler of mass murder.

Syrian civilians find themselves at the mercy of a rapacious regime and violent political Islamists in significant part because the West opted for half-measures in supporting Syrian nationalists, and chose to leave the arming of Syrian opposition fighters largely in the hands of others. The chemical weapons agreement implicitly permitted Assad to resume otherwise unrestricted warfare against Syrian civilians. The Geneva conference gave the regime and its friends a date of January 22, 2014 by which to do their worst. None of this was intended by President Barack Obama. No doubt he is horrified by what is happening. Yet it is all happening in plain sight.

It is understandable that the Obama administration wants the chemical weapons agreement fully implemented, even though chemicals themselves have accounted for a tiny percentage of Syrians killed. It is understandable that the administration wants the conference in Switzerland to take place, although it seems that hope has trumped strategy in terms of shaping an outcome that was supposed to feature the negotiated departure of the Assad regime. It is understandable that the administration believes it has bigger fish to fry with Iran in terms of a permanent nuclear deal. It is all understandable. Yet none of it outweighs the outrage against humanity taking place. Indeed, addressing the outrage itself need not contradict other goals, even if one actually believes that complex and contentious diplomatic processes in various stages of development, with varying prospects for success, outweigh the abomination facing us. What is to be done?

Step one must be for the United States to update military planning for air strikes aimed at destroying or significantly mitigating the ability of the Assad regime to bring massed fires to bear on residential neighborhoods. The political obstacles to military action are significant: the president is not interested, the Pentagon sees Syria as a distraction, Congress’ collective mind is elsewhere, and the American public is largely indifferent. Yet the absence of rapidly executable military options for the commander-in-chief would be grossly unacceptable. President Obama may someday conclude, as President Bill Clinton did in the case of Bosnia, that the United States simply cannot avert its gaze from systematic slaughter. He should, in fact, so conclude today.

Step two is to intervene diplomatically with Iran and Russia in an effort to get them to force their client to stop human rights worst practices. Indeed, if this effort is not already underway something is terribly wrong.

Iran is probably the key: foreign forces it has raised have kept the regime alive and facilitated its terror campaign against civilians. One would hope, in the wake of the interim nuclear freeze agreement, that Washington and Tehran have an open communications channel. One would hope that Washington is already leaning hard on Tehran and Moscow. If it is not, then it must warn both parties starting now that they have a special responsibility to force their client to desist from war crimes and crimes against humanity; that the regime has an obligation to grant the humanitarian relief organs of the United Nations full and unrestricted access to all of Syria. It should be made clear to both parties that if they do not get the regime to cease and desist, that the United States reserves the right to strike militarily to save lives. If Russia will not support a United Nations Security Council resolution mandating that the regime stop its loathsome practices, what are the chances Moscow will support political transition in the upcoming Swiss conference?

Step three is to get serious about supporting Syrian nationalists, both in terms of an interim government seeking to establish itself inside Syria, and armed Syrian forces willing to defend that government in two directions: against both the regime and al-Qaeda forces lured to Syria by the regime. The United States should be working closely with Turkey to carve out a protected zone in northern Syria where a governmental alternative to the Assad regime can take root. Obviously, the restructuring of Syrian nationalist military forces will be the key to this effort, as the defense of a new government will be mainly a Syrian responsibility. Unless the United States takes charge of who in the Syrian opposition gets what from abroad in terms of weaponry and equipment, ordinary Syrians will be at the mercy not only of the regime, but foreign fighters and others dedicated to medieval forms of governance.

Step four is the last resort, but it should be taken if it becomes clear that the regime’s sponsors will not intervene to stop the war on civilians, or if the regime simply defies its sponsors. Aerial strikes, relying to the maximum extent possible on stand-off weaponry, should engage regime aircraft, artillery, missiles, rockets, and the infrastructure supporting them: no boots on the ground, and no military mission aiming to force regime change. The objective would be to stop or at least slow the slaughter of noncombatant human beings.

Yes, the regime might respond by suspending its cooperation with the transport of its chemical arsenal. Would that actually be worse than the bloody blackmail it now holds over the civilized world, as it drops God-knows-what on schools, clinics, apartment blocks, and bakeries? Yes, a conference in Switzerland might be postponed or canceled. Would that be such a setback for civilization given the evident lack of preparation for a respectable outcome featuring full political transition? Yes, Iranian hardliners might persuade the Supreme Leader to abandon negotiations and develop nuclear weapons. Would the price of a permanent nuclear arrangement between Iran and the West therefore be the unrestricted slaughter of Syrians? If that is the price, what would it say about the reliability and worthiness of the West’s interlocutor in nuclear talks?

Sooner or later the United States and its allies will be obliged to act to stop the mass atrocities being waged by the Assad regime against Syrians. Failure to do so will entail costs far transcending the certain condemnation of future historians: ask Lebanese, Jordanians, and Turks about those costs now; consult with European allies about the costs in the not-too-distant future. Syria will hemorrhage people it does not bury for as far as the eye can see. The West would be wise now to focus on these crimes against humanity and try, now and on its own terms, to stop them. This catastrophe will only worsen immeasurably if we try, through various diplomatic artifices, to avert our collective gaze from that which is truly important and move on to subjects supposedly more pleasant and manageable.

Image: A young girl gestures during an anti-Assad protest in the town of Binnish, April 9, 2012 in Syria. (Photo: Flickr)