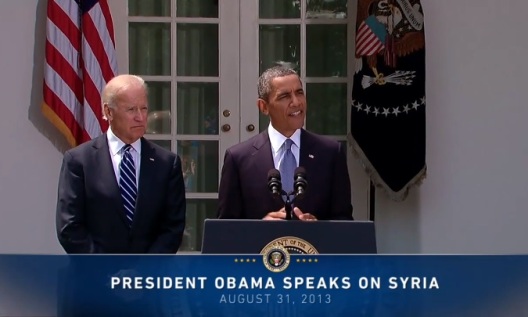 The decision of President Barack Obama to seek congressional approval for US military strikes in Syria is constitutionally sound, but strategically appalling. By not making it clear from the outset of the crisis that he would seek the approval of the Senate and House for a military response to the Assad regime’s chemical atrocity, the president’s jarring change of direction now runs the risk of thoroughly undermining whatever remains of allied confidence in his leadership. By not calling on Congress to return to Washington immediately the president conveys a sense of nonchalance that his newly discovered soaring rhetoric cannot disguise. Having taken a risk that is as profound as it is gratuitous, the administration would do well now to focus on that which it has avoided totally to date: creating and implementing an objectives-based strategy that would, among other things, employ sustained military strikes to destroy or significantly degrade the ability of Bashar al-Assad’s regime to commit mass murder in Syria.

The events of the past ten days suggest that there was no administration forethought to the possibility of a major chemical incident in Syria; there was no plan in place to respond to a major chemical attack by a regime that had already demonstrated its deep and abiding contempt for the president and his red lines. The results of this mystifying lack of preparedness have been abysmal. Secretary of State John Kerry responded quickly with a very convincing replica of presidential leadership, making a strong case for the inadmissibility of the regime’s action and the crying need for a strong American and Western response. Over the next few days Kerry’s clarity was blurred repeatedly by statements emanating from the White House and Pentagon. What effect this uncertain trumpet may have had on the shocking, disgraceful, yet understandable vote in Britain’s parliament is not known, but the spectacle of the secretary of state making the case while other senior officials temporized and agonized is not one to which historians will assign high grades in the annals of presidential leadership.

Indeed, presidential uncertainty and talk of a loud but meaningless “shot across the bow” of the Assad regime no doubt leads some to believe that his call for a vote in Congress is less a bow to American constitutionality than a further attempt to kick the can down the road. This is why the president should have been prepared from the outset to make clear his desire to seek congressional approval. There is not a thing wrong with his official desire to act constitutionally, or his political desire to have a broad array of domestic accomplices. Yet the conclusion that he is motivated by skepticism and even disbelief in the endeavor itself, even if it is a patently unfair finding, is impossible to dismiss out of hand given his behavior over the past ten days and his approach to Syria over the past two years. It is a conclusion that, if permitted to grow roots, can have a corrosive effect on American credibility around the world. It is a conclusion whose dismissal is not facilitated by the president’s decision not to call the Congress into special session immediately.

What then is to be done? Before he heads off to the G20 summit in Russia next week, President Obama needs to be armed with a Syria strategy based on clear objectives. The mantra-like repetition of the phrase “there is no military solution to the war in Syria” is neither an objective nor a strategy. Indeed, according to the Assad regime, Russia, and Iran, it is not even a fact. President Obama may well wish to give his Russian counterpart one final opportunity to bring decency and statesmanship to bear in the Syrian context: “Vladimir, either you persuade your client to declare and enforce a unilateral ceasefire, call for and cooperate with UN observers, implement Kofi Annan’s six point plan, and send a team to Geneva next month prepared to facilitate real political transition, or I—with the approval of Congress—will ruin his whole day.” Even if Russia were willing to work to such an end, the chances of regime compliance would not be great. Yet an administration still dedicated to the one-sided, wishful proposition that this war cannot end with a military result would do well to run to ground, once and for all, the diplomatic possibilities.

The objective of sustained military strikes should be to destroy or seriously degrade the ability of the regime to bring to bear massed fires, chemical or conventional, on Syrian population centers. This would mean concentrating—for several days, if necessary—on artillery, aircraft (along with airfields), and missiles. Ideally the administration would have had a plan to execute within seventy-two hours of the August 21 outrage, one that would have put the regime out of the business of mass murder. Yet, everything that has happened since August 21 suggests that Assad’s action was a big surprise; that there was no executable plan in place. This is a failure that can be sorted out over time by congressional inquiries. Now, the challenge for the Pentagon is constantly to update targeting while the regime tries to move and hide assets.

Putting the regime out of the long-distance, mass murder business is important, not only for the Syrian victims of the Assad regime, but for Syria’s neighbors—among them American allies and friends. The fears of some in the administration that hitting too hard could cause the regime to fall, causing instability from which jihadists might benefit, are simply beyond belief. Leave aside the self-fulfilling consequences of having failed to support mainstream, Syrian nationalist armed opposition elements. Leave aside the failure to follow-up in operationally relevant ways after having recognized the Syrian National Coalition as the legitimate representatives of the Syrian people in December 2012. When has the Assad regime been a force for stability in Syria since March 2011? When it mowed down peaceful protesters? When it authorized door-to-door massacres? When it stampeded two-million refugees across international boundaries? When it employed sarin gas against women and children? When it denied humanitarian access to parts of Syria beyond its control? When it placed itself in the hands of Iran and Iran’s Lebanese militia? This is a regime worth preserving because there is something worse? Has support for the mainstream Supreme Military Council massively increased in the past week? Is this administration, at long last, prepared to substitute action for analysis?

President Obama’s reluctance to engage in Syria has been understandable. Perhaps he now understands that disengagement also has consequences, many of them unintended. The worst of these unintended consequences has been the toll exacted of his credibility and that of the United States. From here on out, he has an opportunity to get things right: cripple the murder machine, support the mainstream opposition effectively, and facilitate the departure from Syria of a merciless, morality-free crime family. There will be no “do-overs.” Yet there is an opportunity to secure the support of Congress, persuade friends and allies that we mean business, and help Syrians save a country whose suffering is an affront to civilization.