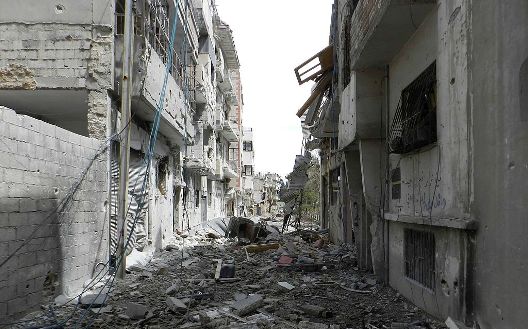 The Islamic State in Iraq and al-Sham’s (ISIS, ISIL, or the Islamic State) cavalier brutality draws headlines in the media, but its obstruction of aid in several Syrian governorates proves that it possesses more subtle means of inflicting cruelty. ISIS’s consolidation of territory across Syria has made aid delivery in Aleppo, Deir-Ezzor, Raqqa, and al-Hasakeh extremely difficult, at times even impossible. As United States surveillance aircraft gather information ahead of impending action in the country, it is appropriate to bear in mind considerations that recognize this humanitarian predicament as a variable in the calculus of what airstrikes might strive to accomplish.

Airstrikes against ISIS could enhance the accessibility of aid operations.

Additionally, the World Food Programme (WFP), the largest humanitarian agency inside Syria, recently stated that in July and August none of its food reached Ar-Raqqa governorate (home to ISIS’s effective capital), and in Deir-Ezzor and al-Hasakeh its deliveries were sufficient for just 20 percent of total need. Clearly ISIS’s effect on aid is acute; this ineffectiveness is particularly noteworthy given that WFP’s dispatches in Syria reached a record 4.1 million people during August. Other examples of ISIS’s territorial control obstructing aid access abound; however, relief agencies are cautious in publicizing details.

With control of roadway stretching diagonally across the country, ISIS has effectively cornered off a triangle of territory in Syria’s northeast. But that it is frequently said to control ‘swaths’ of land may falsely suggest provision of aid in this area can only come on the heels of an exhaustive air campaign. Certainly any air assault will have to be aggressive, but as Kathy Gilsinan observed, maps indicate ISIS’s territory “looks less like a state-sized chunk of land than a network of roads.” The capacity of airstrikes to target such roads and improve the prospects of cross-line and cross-border aid deliveries deserves attention.

ISIS is a destabilizing force in Syria. “When [ISIS] comes their way, tens of thousands of civilians get out of the way,” Paul Salem of The Middle East Institute recently remarked. In supporting the opposition’s armed struggle against Assad’s government, the United States recognizes the inevitability of displacement. Displacement resulting from ISIS’s campaign against opposition forces and civilians is clearly different and military action to curtail it deserves consideration. In its most recent emergency report on Syria, USAID noted that fighting between ISIS and opposition forces has displaced 76,000 people in the Deir-Ezzor governorate alone.

Strikes that minimize such fighting, contain ISIS’s spread, and reclaim territory for the opposition are fundamental to Syria’s stabilization. The long-term effort to relieve the refugee burden on Syria’s neighbors, resettle IDPs, and foster a level of stability conducive to the steady flow of aid has to take into account the instability ISIS’s presence provokes. Commenting on this destabilizing effect of fear among Syria’s displaced, IFRC’s Khaled Erksoussi noted, “No matter how much you talk about how they should go back, while there is no tangible support or perception of safety, why would they go back?”

While it is clear improving material conditions in Syria carries moral weight, the proven linkages between failed states, poverty, and extremism also dictate that addressing Syria’s humanitarian crisis is a counterterrorism concern. With President Obama’s conclusion in his recent ISIS speech—acknowledging the significance of the United States’ rescue effort on Mount Sinjar—it is worth contemplating how Syria, too, might constitute an intersection of US force and benevolence.

Matthew Timmerman is a Syria relief professional based in Washington, DC.

Image: Destruction in Homs after the Syrian Army offensive in 2012. (Photo: Wikimedia)