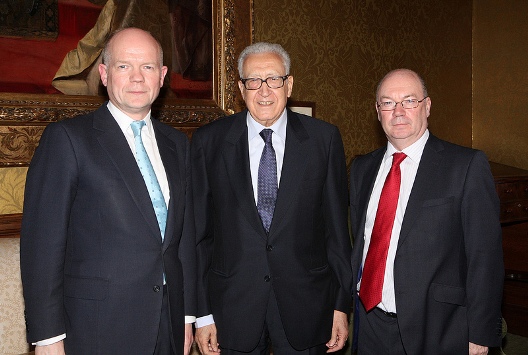 The London 11 core group of the Friends of the Syrian People on October 22 took aim at giving a very skeptical opposition Syrian National Coalition a basis for attending a Geneva peace conference (Geneva 2) in late November. The communiqué, bearing the imprint of US Secretary of State John Kerry and issued by the group hosted by British Foreign Secretary William Hague, clearly indicates that the coalition’s concerns about Geneva have been heard loud and clear. Whether the assurances contained in the document will be enough to entice the coalition to attend remains to be seen. Yet its absence from a Geneva conference would likely spell the end of the Syrian National Coalition as the West’s opposition interlocutor of choice. And its prospective attendance mandates some hard and politically sensitive homework.

At the conclusion of the London meeting—one that included a Saudi Arabia that had recently indicated outrage with US President Barack Obama’s policy toward Syria—the eleven states called on the Syrian opposition to compose “a single delegation” for Geneva, one with the Syrian National Coalition as its “heart and lead,” and pledged to step up joint efforts “to channel support to the National Coalition and the Supreme Military Council of the Free Syrian Army.” The London 11 made clear its view that the purpose of Geneva 2 is to bring about political transition in accordance with the June 30, 2012 Final Communiqué of Geneva 1: a formula whose mutual consent and full executive power clauses rule out a role for Syrian President Bashar al-Assad’s regime in the future governance of Syria, albeit without mentioning Assad by name and leaving open the hypothetical (though profoundly remote) possibility that the opposition could consent to an ongoing regime role.

Will the London 11 communiqué be enough to entice the coalition and its largest component (the Syrian National Council) to attend Geneva 2? The Supreme Military Council has already rejected participation (a position presumably subject to reconsideration), and the coalition will convene in early November to consider the question.

Clearly, the 11 addressed the coalition’s core concerns: inadequate support for nationalist military forces; Russian and regime attempts to pack the opposition delegation with regime operatives; and an open-ended process with no prospect of removing the regime—a ruling clan and its blood-soaked enablers—responsible for Syria’s catastrophic plight. Indeed, the 11 went farther: they accurately described the Geneva 1 political transition formula as one whose implementation would end Assad clan rule; and they called on the regime to implement deescalatory measures drawn from former Special Envoy Kofi Annan’s six point plan; measures embedded in Geneva 1.

The 11 went farther yet by stating, “Both the Syrian regime and the Syrian National Coalition must adhere publicly to a political transition based in the full implementation of the [June 30, 2012] Geneva Communiqué, prior to the Conference.” Ideally the coalition will respond positively and quickly, drawing (as the London 11 did) on the literal language of the 2012 Final Communiqué to spell out the obvious, regime-ending implications of the mutual consent and full executive powers clauses. It is possible that the Assad regime will simply ignore the London 11 or, with the assistance of the ever resourceful Russian Foreign Minister Sergei Lavrov, declare its adherence and devotion to a political transition process that would remove one powerless council of ministers (AKA the Syrian Arab Republic Government) and insert another, leaving the Assad-Makluf clan and its employees ruling a critical part of Syria.

Indeed, it is not likely that Russia will drop its campaign to redefine transition as stasis. It is even less likely that Bashar al-Assad, whose grotesque effrontery includes the suggestion that he might stand for reelection in the country he has all but destroyed, will acknowledge the literal language of Geneva and its inevitable implications. European diplomats say that the chemical weapons agreement has been accompanied by stepped-up Russian weapons deliveries to a regime long since identified by the international independent commission of inquiry on Syria as steeped in war crimes and crimes against humanity. Iran, appropriately repelled by its client’s deadly application of toxic chemicals, nevertheless remains committed to preserving a regime willing to subordinate Syria to the Supreme Leader and his Lebanese understudy.

The London 11 will have to gauge the regime reaction to its communiqué carefully. The regime’s position to date is that the status of the person who possesses all executive authority in the Syrian Arab Republic is not up for discussion. This position would, if allowed to stand, gut the essence of the Geneva 1 Final Communiqué. If it persists there would be no reason to convene Geneva 2. The London 11 deserve credit for their clarity of this point. As the coalition considers its own response it would do well to avoid giving the regime, Moscow, and Tehran a free ride by failing to adhere to the literal language of Geneva 1.

Whether or not Geneva happens, it is absolutely essential that the London 11 language about supporting the Supreme Military Council be translated into immediate action. The United States long ago accepted intellectually the proposition that the best way to arrest and reverse the growing marginalization of Syrian nationalists on the battlefield is to make sure that the Supreme Military Council gets what it needs—weapons, equipment, money, and training—to draw away from jihadists (including al-Qaeda) young Syrian men who have gone to where the resources are. The operational content of the proposition’s acceptance has been modest, to put it politely.

The United States should impose itself on its partners to insure that the right people get the right stuff. This imposition will be tolerated and even welcomed if the United States is seen as pulling its own weight in terms of making resources available. Both the willingness of the Syrian National Coalition and Supreme Military Council to participate in Geneva and their perceived status inside Syria rides, for better or worse, on the willingness of the Obama administration to translate words into observable action.

Action is required of the coalition as well, and this will not be easy. Acceptance of the invitation to Geneva, strictly in accordance with the terms and conditions spelled out by the London 11, is the easy part.

Between now and the convening of a conference, the Syrian National Coalition must graduate from a collection of disputatious individuals to a resistance organization willing to anoint and follow—on pure faith, if necessary—a leadership cadre that would carry it through Geneva. If the details of what is to be done at Geneva are to go to the lowest common denominator of general debate and endless haggling, the coalition would best serve the Syrian revolution by dissolving itself now. A compact leadership cadre needs the flexibility to accomplish some sensitive tasks quickly and discreetly.

The London 11 communiqué does not grant exclusivity to the Syrian National Coalition as the representative of Syria’s opposition at Geneva. The coalition should move now to design a delegation top-heavy with those who have led the struggle and sacrifice inside Syria. This does not mean integrating members of the regime’s house-broken opposition. It does mean drawing on those from local committees who have been trying to provide some semblance of civil administration and services for Syrian citizens from the beginning. It does mean reaching out to civil society, taking full advantage of the fact that Syria’s most effective post-Assad leaders may well be those on whose heads the full weight of this catastrophe has fallen: women. If the Syrian National Coalition is unable to do these things out of an abiding sense of patriotism and decency, it should do so as a matter of self-defense. Anything it attempts to bind and seal in the name of the coalition alone will not prevail.

The coalition, supplemented by those who have borne the burden and made the sacrifice inside Syria, should come to Geneva with the roster of names it would deem suitable for service as Syria’s transitional governing body. It should be prepared in this manner to demonstrate its seriousness to the Syrian people and to the world. Yes, Geneva 1 calls for the transitional governing body to be defined through negotiations on the basis of mutual consent. Yet there is no reason why the Syrian opposition at Geneva cannot present to Special Representative Lakhdar Brahimi and then introduce to the world its all-star team for Syrian political transition: a list of perhaps a dozen or fifteen people embodying excellence, non-sectarianism, diversity, proven effectiveness, and patriotism. Senior members of recent governments and even the current government—people who have tried to serve Syria honestly in spite of the regime’s depredations—absolutely should be included. The opportunity to display, at long last, to the Syrian people a decent and credible alternative to the corruption, incompetence, and brutality of clan rule; an alternative that helps Syrians believe that a united Syria of citizenship can arise from the ruins.

Finally: the London 11 communiqué eloquently describes the terror routinely being visited on unarmed civilians by forces responding to he who would permit himself to be re-elected. If Russia is interested in Geneva 2 as a vehicle for meaningful political transition in Syria it will try to convince the regime now to stop the gratuitous slaughter. If Iran genuinely wishes to participate in Geneva 2, persuading its colleague now to cease the artillery and aerial pounding of populated areas would be far more meaningful than a formulaic, recited acceptance of Geneva 1. It would also preserve or perhaps revive the prospect of a decent relationship for Iran with the people of Syria post-Assad, without requiring it to cashier or even compromise a person for whom Tehran has no affection or respect.

The London 11 communiqué seems to reflect real determination to focus Geneva 2 on the subject of Geneva 1: genuine political transition. It acknowledges that “the coming months” may be required to achieve the desired results. That formulation, obviously, neither predicts nor guarantees a rapid or successful result.

The only thing that is predictable and guaranteed is the continued suffering of the Syrian people. Although the Assad regime is not Syria’s sole purveyor of death, destruction, injury, and terror, it is by far the largest, the most dedicated, and the most efficient practitioner of war crimes and crimes against humanity. It must be stopped from pursuing this butchery. Russia and Iran should be given an opportunity—one not unlimited in time—to achieve a decent, humane result through means they would find preferable to the reconstruction of a credible threat of military force by Washington. In no event, however, should the outrages inflicted on Syrians civilians become, for a Geneva negotiating process, what they are today: the daily norm accepted by a world eager to look the other way.