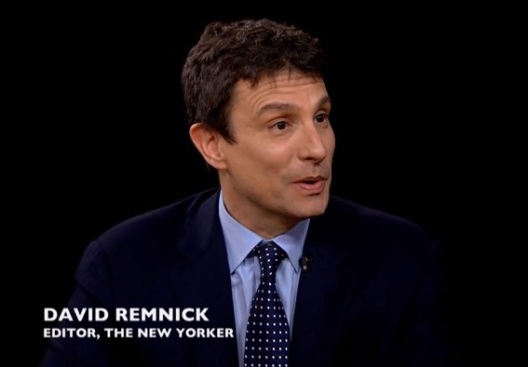 It is very difficult to imagine a scenario in which our involvement in Syria would have led to a better outcome, short of us being willing to undertake an effort in size and scope similar to what we did in Iraq.
–President Barack Obama as quoted by David Remnick in “Going the Distance: On and off the Road with Barack Obama,” The New Yorker, January 27, 2014.

Had the United States actually done in Syria something of the size and scope of what it did in Iraq, the result would have been disastrous. The military occupation of Syria would have been every bit as problematical as the Iraq experience, with US soldiers and marines bogged down and bleeding in the quicksand of a shattered political culture. Yet the President of the United States argues that in-between the arm’s-length Syria policy he has pursued and military invasion and occupation there were no options: at least none that might have made a difference for the better.

Remnick’s piece about one of the smartest, most thoughtful and analytical men (the “Professor-in-Chief”) ever to occupy the White House is hardly a hatchet-job. Indeed, its subject comes across as a true conservative in an era where the word is being been conflated with anti-government populism and a broad portfolio of resentments; someone steeped in history and willing to press for significant changes only when convinced of the manifest necessity of doing so. Mr. Obama finds himself assailed by the left for being insufficiently progressive and by the nouveau-right for being a socialist. Remnick’s portrait leads to the inescapable conclusion that Americans could do far worse than having Barack Obama as president. Indeed, they have.

Yet the passages about Syria are troubling. The article was not about Syria, so the presidential thoughts captured by Remnick may not reflect the totality of Mr. Obama’s thinking. However, if the president truly believes that there was nothing at all between his arm’s-length approach and the 82nd Airborne Division floating down on Damascus, what was it exactly he was trying to tell the American people in the wake of the Assad regime’s August 21, 2013 chemical atrocity? He made it clear that punitive military strikes were necessary and would not involve “boots on the ground.” Did he believe what he was saying? The quote from Remnick suggests he did not. Indeed, the subsequent hot potato tossed to Congress and then his lunge for a chemical weapons agreement seem to support the impression that he believed little or nothing of what he was saying to the American people and Congress about his “decision” to strike Assad regime assets.

In fact, aerial assaults on regime artillery, military aircraft, rockets, and missiles would not have required or produced the invasion and occupation of Syria. Would these attacks “have led to a better outcome” in Syria? One need only ask how many civilians Syrian President Bashar al-Assad’s regime would have been able to slaughter between September 2013 and now had it been stripped of its tools of mass terror. As diplomats gather in Switzerland to discuss peace in Syria, regime helicopters unload barrel bombs on clinics and schools. This horror is the specific outcome facilitated, albeit unintentionally, by trading away life-saving military strikes for a chemical weapons deal. As long as the regime uses non-chemical ordnance, the Obama administration is comfortable saying that “Iraq”—invasion and occupation—is the only viable alternative to an approach to Syria that prays for diplomatic miracles unaided by any credible threat of force in response to mass terror.

Remnick quotes Ben Rhodes, a key administration national security staffer, as saying “For the President, Iraq was the defining issue…” Fair enough: there is nothing wrong with catastrophe avoidance. Yet there is nothing in what Remnick quotes the president as saying about Syria that reflects disciplined, critical thinking about the actual problem at hand, which is not Iraq. There are several examples.

“And when I hear people suggesting that somehow if we had just financed and armed the opposition earlier, that somehow Assad would be gone by now and we’d have a peaceful transition, it’s magical thinking.” This is a straw man fallacy that misrepresents the views of those who have opposed the arm’s-length, rhetoric-rich hope that Syria could somehow fix itself if only the warring parties would meet and sort things out. The real question is what the balance on the ground would look like now in Syria if the president had heeded the advice of his national security team in the summer of 2012. John Kerry may someday argue in his memoirs that Bashar al-Assad would not have considered himself a military victor at the outset of the January 2014 Geneva conference; that his calculation about political transition negotiations would have changed for the better had the correct decision been made in 2012.

“Very early in this process, I actually asked the CIA to analyze examples of America financing and supplying arms to an insurgency in a country that actually worked out well. And they couldn’t come up with much.” Might a better question have been, “Can we do this successfully in Syria?” Had the answer been “No,” fair enough. Yet a predisposition to do nothing producing a decision along the same lines is not the same thing as a rigorous assessment.

“And the truth is that the challenge there has been, and continues to be, that you have an authoritarian, brutal government who is willing to do anything to hang on to power, and you have an opposition that is disorganized, ill-equipped, ill-trained, and is self-divided.” Is the lesson here that brutal regimes willing to do anything to hang onto power enjoy a special immunity from US efforts to mitigate their depredations? And is the opposition’s equipment and training status a product of nature? Regime, al-Qaeda, and other Islamist forces in Syria have not had problems with money, weaponry, and equipment. Will the administration actually say it did all it could to mitigate problems having to do with organization, equipment, and training?

“And, in that environment, our best chance of seeing a decent outcome at this point is to work the state actors who have invested so much in keeping Assad in power – mainly the Iranians and the Russians—as well as working with those who have been financing the opposition to make sure they’re not creating the kind of extremist force that we saw emerge out of Afghanistan…” So: those who have invested so much in Assad and have succeeded in stabilizing his position in western Syria are now going to be talked into undoing their handiwork? Without any skin in the game, the United States is going to persuade Saudis and others to support the non-sectarian actors on which the administration has lavished meals-ready-to-eat, medical kits, and trucks?

There are many steps the administration could have taken that would have produced in Syria a situation far less abominable than it is today. Would Assad be gone and Jeffersonian democracy installed? Not likely. Yet would the regime today be slaughtering people with efficient impunity, pounding residential areas with artillery, rockets, missiles, and aircraft? Not if those systems had been neutralized. Could there have been by now an alternate Syrian government functioning in liberated areas and protected by well-armed, equipped, and trained Syrian military forces? Yes indeed. Would any of this have been easy? No. Would it have required invasion and occupation? Absolutely not.

The Obama administration will have to undertake a thorough reevaluation of its Syria policy sooner rather than later. The humanitarian outrage is an affront to all of mankind. The regime and its supporters have exhibited no interest in implementing the Geneva Conference mandate for political transition and fundamental change. The carnage in Syria is having dire consequences for Jordan, Iraq, Lebanon, and Turkey. Bashar al-Assad has calculated that he can do as he pleases to keep himself and his clan in power without fear of a kinetic US reaction, no matter the size or cumulative effects of the outrage.

If the president truly believes and adheres rigidly to the proposition that the only positive, feasible alternative to his current Syria policy is invasion and occupation, then any policy reappraisal will be sterile and useless. The avoidance of another Iraq-like war is not the problem. The problem is the “magical thinking” the president decries: the belief that talk about people stepping aside and red lines can substitute for a range of actions that will not produce a near-term panacea, but can save lives, change calculations, and shape diplomacy.