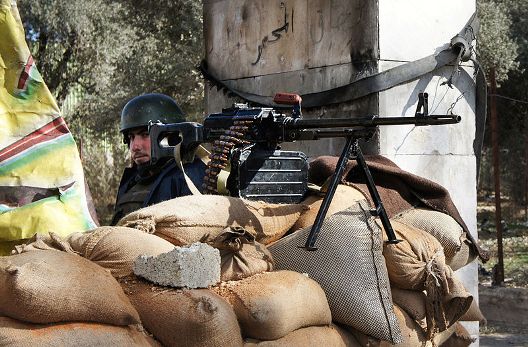 For President Barack Obama and his national security team, the challenge of ending or mitigating the grave threat posed by a dying Syria to regional and global security will involve more than holstering, surrendering, and destroying an enormous chemical arsenal. As loathsome as they are as an instrument of war, chemical weapons in Syria are the tip of a deadly iceberg: a systematic campaign of regime terror that has driven 7 million Syrians from their homes (2 million to neighboring countries), killed well over 100 thousand civilians, and maimed and traumatized countless others. That part of the iceberg that is subterranean—conventional, high-explosive, and cluster ordinance—accounts for nearly all of the death, destruction, terror, and trauma. That which lies below the surface is what imperils the security and economies of allies and friends in the region. That which has been overshadowed by the chemical tip is what makes a political track in the Syrian crisis—negotiations, compromise, accommodation, peace, and reconciliation—impossible. As the United States and Russia engage on the ways and means of sawing off the iceberg’s tip, they should address and ultimately melt the behemoth that lies beneath the waves.

No one, including the president, can be happy about the chain of events that brought the United States to where it is right now vis-a-vis Syria. The president’s critics are legion. His fans—at least in the Syria context—are few. No doubt there is plenty of grist for historians to mill in the fullness of time, just as there is no shortage of material for those commentators less inclined to wait. There is no shortage of critics. Yet there is nothing less useful at this stage than criticism, even if objectively there is much about which to be angered and outraged. If the United States gets Syria wrong, the implications will far transcend Barack Obama’s report card and the ways in which Syria impacts the 2014 mid-term elections. What then, in practical terms, is to be done?

Secretary of State John Kerry is in the process, today and tomorrow, of exploring whether or not the Russian proposal to bring Syrian chemical weapons under international supervision for destruction holds water. There are many who are skeptical about Russian intentions, prospective regime performance, and the technical feasibility of the proposal itself. These skeptics—including yours truly—are about as useful to the president and Mr. Kerry right now as the critics. The president was on the verge of losing a vote in Congress whose implications for Syria and the reputation of the United States could have been catastrophic. He needed time to build a case, one that could not be completed by a single speech. Russia, for whatever reason, gave him a time-buying vehicle. For all we know the vehicle in question may actually have an engine and wheels. For the administration not to do its due diligence on this matter would be inexplicable and inexcusable.

Yet the meeting of Secretary Kerry and Russian Foreign Minister Sergei Lavrov in Geneva should address the entirety of the deadly iceberg, not just the chemical tip. In May of this year, Kerry tabled a proposal to reconvene the P5, along with the Syrian parties to the conflict, in Geneva to resume and implement the Syria political transition work mandated by the P5 in Geneva in June 2012. Russia accepted the proposal.

Geneva 2, however, has not happened because it cannot happen under current circumstances, even absent a chemical component. As long as the policy and practice of the Assad regime is to shell civilian areas “with artillery, mortars, and rockets,” including (according to the latest report of the independent international commission of inquiry on Syria) “aerial bombardments by helicopters and jet fighters [using] imprecise weaponry, such as surface-to-surface missiles and cluster munitions,” there is not a prayer for convening a peace conference or arriving at a political solution. It is one thing to talk and fight in the context of actual military operations. It is quite another to expect anyone purporting to represent the Syrian opposition to show up in Geneva for discussions with representatives of a regime engaged daily in war crimes and crimes against humanity. How would such a representative preserve his or her legitimacy and credibility with those on the receiving end of a barbaric campaign almost entirely non-chemical in nature? This rudimentary fact of life was clearly recognized by the former UN and Arab League special envoy, Kofi Annan, who implored the Assad regime to stop the terror and implement a series of humanitarian, de-escalatory steps.

Some of those who fear the implications of the Russian chemical proposal argue that Moscow wants the toxins set aside precisely so its client can resume business as usual with conventional munitions. According to this theory, Moscow and Tehran alike were stunned by the idiocy of their Syrian client, whose campaign of terror through massed fires had not aroused any interest at all in a military response by the Obama administration, in spite of its effects on American allies and friends in the region—to say nothing of the horrific impact on Syrian civilians. Indeed, Russia and Iran might well wonder what Bashar al-Assad had in mind. He seemed to be doing just fine tactically in recent months with the help of Iran and Hezbollah, using conventional weapons seasoned with the occasional low-level chemical operation: not enough to engage the United States kinetically, for sure.

Would it, in fact, be acceptable from the point of view of the United States if Assad, after a brief pause starting in the immediate wake of the August 21 outrage, goes back to business as usual? Is it remotely possible that a president willing to justify the use of military force with the aid of images showing children murdered with chemicals is not similarly moved by innocents torn to pieces by mortar rounds, artillery shells, thermobaric bombs, cluster munitions, and barrel bombs? With all that has transpired over the past three weeks, is a return to business as usual for the Assad regime OK as long as chemicals are not used?

Clearly it is not. Even though the slaughter of the past two years did not inspire administration thoughts of military strikes aimed at stopping a humanitarian catastrophe from engulfing friends and allies as well as Syrians themselves, the administration was not entirely indifferent, as witnessed by the massive humanitarian effort it undertook. Yet one thing is certain: the prospect of a political process for Syria is nil so long as the regime’s war on civilians continues. Instead of focusing on when a Geneva conference might be held, who might be invited, and what should be discussed, the United States and Russia should be concentrating all of their energies on building a foundation for a successful negotiation. Russia, in particular, might usefully persuade its client to implement Kofi Annan’s proposed steps and invite UN observers to monitor a ceasefire: all of which could pave the way for Geneva 2.

Today and tomorrow in Geneva, John Kerry and Sergei Lavrov will focus on Russia’s chemical weapons proposal: a possible way forward for dealing the tip of a deadly iceberg. Yet they cannot and must not ignore that which will sink any effort to end Syria’s nightmare peacefully. If there is anything at all to Russia’s proposal and the Assad regime’s declared interest in cooperating with it, Kerry and Lavrov should devote quality time to seeing how aspects of its implementation (such as a prospective UN presence on the ground) could be applied to the deeper, more fundamental problem. Removing the iceberg’s tip would be fine. Melting the menace to Syria and to US allies and friends in the region—through peaceful means if at all possible—is mandatory.