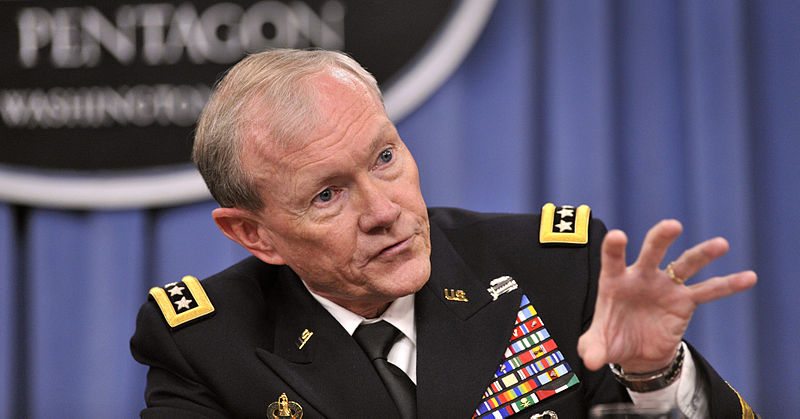 And if we choose to – to conduct a no-fly zone, it’s essentially an act of war, and I’d like to understand the plan to make peace before we start a war… [A]nd the question for the nation will be, for our elected leaders, where will we prioritize our resources? But if that [the no-fly zone] becomes a priority, we can make it happen.

General Dempsey, along with Secretary of Defense Chuck Hagel, heads an institution that shares with President Barack Obama one fervent belief: Syria is a problem the United States should not own; a bridge too far given American commitments around the globe. As Dempsey noted during his joint press conference with Hagel, sequestration is already producing serious readiness shortfalls at a time when the defense department is fighting a war in Afghanistan, keeping an eye on the Korean peninsula, and updating any number of contingencies concerning Iran. Syria is a distraction from the Pentagon’s point of view, until the commander-in-chief says otherwise. The president, however, seems to be in no hurry to make the case to Congress or the American public that Syria matters and that the United States should act to help secure friends and allies from the consequences of the Assad regime’s terror campaign of shelling, bombing, and rocketing civilian residential areas.

There is nothing wrong with senior defense officials making the case in public that there are no kinetic silver bullets when it comes to Syria. Dempsey did a positive public service by reminding people that governing, including matters of foreign policy, is about choosing. He may have usefully added that the practical consequences of US military operations fall on a pitifully low percentage of Americans, those in uniform and their families: an ongoing national disgrace. One may quibble about the possibility that the regime, Iran, Hezbollah, and Russia took comfort from his remarks, but the general’s duties are not to those parties. Where he might well have reconsidered his comments has to do with his focus on the no-fly zone and the "plan to make peace" formulation.

Chaos in Syria presents a specific problem that President Obama has identified as a "serious" national interest: its deleterious economic, social, political, and security ramifications for Syria’s immediate neighbors, all of whom figure prominently in American regional security calculations. The overwhelmingly key driver of this chaos, particularly with respect to Jordan, Turkey, and Lebanon, is the aforementioned regime policy of subjecting populated areas beyond its control to murderous terror attacks. If aiding Syria’s neighbors in this regard means anything at all, it means stopping or significantly impeding the practice of stampeding terrified civilians by the tens of thousands. Ideally it would be halted by means of an all-out diplomatic offensive, one that would focus on Russia making and enforcing the requisite demands on its client. There are two broad, potentially overlapping, and less than ideal options: pump humanitarian, economic, and security assistance into the neighbors in ever-increasing amounts (and pray that they will be able to handle things); or engage the tools of the terror campaign by military means.

General Dempsey, for understandable reasons, is not attracted to the second of these options. By focusing on the downsides of a no-fly zone—and they are legion—he may have wished to leave the impression that it is the primary methodology under consideration to produce the desired end-state: the inability of the Assad regime to slaughter and stampede civilians on a wholesale basis. In fact, Dempsey is correct: the no-fly zone idea is a poster child for inefficiency, ineffectiveness, and inappropriateness in the Syrian context. Just for starters it would not touch artillery (by far the greatest killer and terrorizer), it would require a sustained aerial campaign to suppress air defenses, and it could indeed divert assets needed elsewhere for a long time, under difficult fiscal conditions. A relatively short and very violent aerial assault on the tools of terror—again, one preceded by thorough diplomatic due diligence whose success would preclude a military operation—would make a lot more sense.

Although General Dempsey did not address the aerial assault sub-option, no doubt part of his argumentation would stay in place: that which is proposed is an act of war, so before we go to war tell me the plan for peace. This is a proposition worth examining.

Yes, it would be an act of war. No, it would not be the same thing as inaugurating a process requiring a ceremony on the battleship Missouri. The military mission would be to destroy or significantly degrade the regime’s ability to subject civilian populations to artillery, aerial, and missile attacks. Mission accomplishment would be measured in terms of the mission’s definition. If the military mission were one of providing strategic and tactical air support to ground operations conducted by Syrian rebels, it would be a different matter. Yet the operation in question would be aimed at something else entirely: bringing relief to allies and friends bearing the brunt of the Assad regime’s terror campaign.

Fighting in Syria would not be stopped by such an operation, and no one need assume that it would decisively affect anything beyond its intended purpose. Some might object along the lines of "So what does the United States do once this limited objective is achieved? Just stop direct military intervention?" The answer is yes. Return visits might be mandated if the regime, with Russian and Iranian help, reconstitutes its ability to terrorize population centers through shelling, bombing, and rocketing. Yet mission accomplishment in this case is linked to altering conditions that are wreaking havoc among American allies and friends.

Perhaps General Dempsey and others would argue that if our allies and friends are the focus of US concerns vis-a-vis Syria, surely we would be obliged ultimately to remove the regime. After all, a regime military victory – one accomplished, to be sure, without aircraft and missiles and with severely reduced artillery holdings – would be the worst of all outcomes for the neighbors. Refugees would stay put and be added to exponentially as the regime conducts door-to-door pogroms. Damascus would become Pyongyang on the Barada, with the ruling family eating well while the rest of the country starves and seeks relief elsewhere: Russia and Iran would be AWOL when it comes to reconstruction in Syria. The regime would likely also commission destabilization operations in countries that had supported the opposition. Indeed, while there is no shortage of fanciful post-Assad worst-case scenarios out there, it is the Assad-in-power scenario that is the worst for all concerned, except for the ruling family, Iran, and Russia.

There may come a time when the president may decide to go all-in, as Iran and Hezbollah have. Yet this decision would not be connected to, much less mandated, by a limited operation aimed at fixing or mitigating a specific problem: the terror campaign destabilizing allies and friends. To conflate this problem with the broader one is either a mistake or a device aimed at influencing an argument. If and when the United States elects to go to war to remove the Assad regime, then General Dempsey’s demand to know the plan to make peace becomes relevant. Until then, the discreet suppression of weaponry wreaking chaos in the region would not mandate the prior production of a blueprint for a Levantine Congress of Vienna.