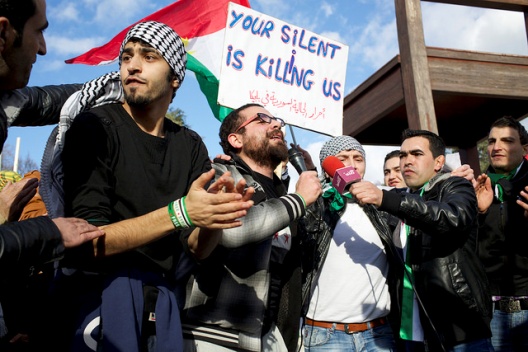 The idea of convening warring parties to negotiate peace is, under normal circumstances, honorable, praiseworthy, and practical. Yet there is nothing normal about the Geneva II initiative. These parties—Syrian President Bashar al-Assad’s regime and the Syrian National Coalition—have been convened as if there are misunderstandings to clear up and compromises to reach. Getting the parties to the table is being celebrated as an accomplishment. What we have here is not a failure to communicate. What we have instead is a monument to failure itself.

Two parties have been dragooned to Geneva: one thinking military victory is, thanks to the efforts of its allies, in the bag; and the other being asked by its fair-weather friends to accomplish in a conference room things long-since consigned by those friends to the too-hard-to-do basket.

Geneva II is the product of failure: the abject failure of very important states to address, much less resolve or mitigate, what United Nations Secretary-General Ban Ki-moon described at this past weekend’s Munich Security Conference as “the most urgent security issue in the world today.” Geneva II suddenly became the only game in town because all other options were swept from the table in the chaotic, too-strange-for-fiction Washington response to the Assad regime chemical weapons atrocity of August 21, 2013.

True, the chemical weapons agreement of September 2013 gave President Barack Obama important arms control bragging rights. Yet chemical attacks had been a minor part of a mass murder campaign, one destroying Syria and undermining a region featuring US friends and allies. Moscow, seizing on a diplomatic opening with skill and alacrity, removed a loaded pistol from the president’s hand so that its client could continue his bloody business undisturbed and undeterred. With all other meaningful options (supporting an alternate government, arming nationalist fighters at significant levels, destroying regime military tools of terror) already blocked by President Obama, what else was there for Secretary of State John Kerry to do besides call for a peace conference, hope for Russian help, and persuade the air-breathing, nationalistic Syrian opposition to attend?

Lakhdar Brahimi, Special Representative for the United Nations and the League of Arab States, was blunt in his Munich assessment of Geneva II’s first ten days: nothing was accomplished. One is free, of course, to say: wait, this is the blinking of an eye diplomatically; Syria’s crisis is incredibly complex, and it will take months for the parties to sort things out. Yet this is not about sorting things out. As Brahimi noted in response to a question in Munich, the Syrian government believes it can win militarily. For the Assad regime, participating in Geneva is a favor to Moscow, which sees the exercise as useful in terms of highlighting its own importance and (ideally) exposing and exploiting fissures in the Syrian opposition.

The key point, however, is that the regime thinks it has, from Iran and Russia, the backing it needs to prevail militarily. Indeed, over the past several months foreign fighters brought to Syria by Iran and operating under the guidance of Iranian advisors have gained important ground for the regime, solidifying the position of Bashar al-Assad in that part of Syria (adjoining Lebanon) deemed by Iran to be critically important. Foreigners do the fighting while regime forces stand back, shelling populated areas from afar and dropping bombs on residential areas from altitudes above rifle range. It is an effective division of labor. In the eyes of the regime and its foreign backers, it is working. What is there to negotiate?

Some of the Munich speakers offered the reflexive formulation used to justify Geneva II and other forms of inaction: there is no military solution for Syria; hence talks are mandatory. This is an article of faith in US diplomacy: faith, not reason. It is, like the Geneva initiative itself, the product of deliberately discarded options.

Those who say there is no military solution for Syria are really saying there are no military options they wish to exercise. Even the modest, life-saving option of destroying regime air, artillery, rocket, and missile assets used to produce genocidal effects is dismissed on the grounds that it cannot solve the overall problem of Syria. As President Obama recently claimed in The New Yorker, the choice is all or nothing: invade and occupy Iraq-style, or refrain entirely from military strikes. Why is this so? What was he considering last August before he changed his mind? Did the anti-genocide bombing campaign in Serbia a decade-and-a-half ago aim to occupy the country?

No military solution? It is analytically defensible to say that the Assad-Makhlouf clan will never again rule Syria as it did before mid-March 2011, and therefore political arrangements for all of Syria must be arrived at. Yet an interim (at least) military solution satisfactory to the regime and Iran has already been achieved. The regime, borne aloft by foreign fighters, rules that part of Syria it (and its Iranian savior) believe worth ruling. The rest, from a regime perspective, can either rot in hell or someday, perhaps, fall into its lap like rotten fruit. The regime, with considerable (if inadvertent) help from the West, has militarily marginalized its secular, nationalist opponents, leaving much of eastern Syria to armed Islamists now at war with one another.

Is Geneva II an antidote to the “no military solution” fallacy? On January 22 in Montreux some forty foreign ministers made speeches and left, leaving Lakhdar Brahimi holding an empty bag. Indeed, he could count himself lucky if it was merely empty. When Geneva I came about in June 2012 Brahimi’s predecessor, Kofi Annan, made it clear that discussions between the Syrian parties would have to be preceded by significant deescalation on the ground, and that outside powers would have to cooperate to make that happen. Yet it was left to Brahimi and the two Syrian parties—one of which thinks a military solution is at least partly in place—to address local ceasefires and United Nations humanitarian access. Is it any wonder that next to nothing was accomplished?

The Geneva discussions are set to resume on February 10. The Syrian National Coalition is, to its credit, doing its part. It is pressing for humanitarian initiatives that can benefit all Syrians, not just those desperately in need of food, water, shelter, medical treatment, and a good night’s sleep free of shelling or bombardment. It has kept faith with the mandate of Geneva I by insisting that political discussions focus on creating the transitional governing body. It has demonstrated a high degree of professionalism that has given momentary pause to regime apologists who take grim-faced delight in celebrating the dysfunction of the Syrian opposition. The apologists have had little to say about the bizarre, abusive, and over-the-top performances of regime functionaries representing not a proper state or a real government, but Syria’s version of the Sopranos.

The United States, which pushed for this conference to compensate for discarded options, has some serious obligations in the coming days and weeks. Brahimi, trying to convert a dialogue of the deaf into a negotiation, may be tempted to try to water-down the language of the 2012 Geneva Final Communique to make it more palatable to the regime delegation; to talk about ministries in a national unity government and the distribution of governing power, leaving aside the presidency and the security services. Geneva I calls simply for a transitional governing body exercising full executive power, including over security forces, and consistent with human rights standards. Playing around with the formulation would be fine if it were established that the regime delegation is authorized to negotiate the transfer of full executive power to a governing body peopled on the basis of mutual consent. Until this is established the United States must insist that the Special Representative stay within the parameters established by the P5 in June 2012.

More importantly the administration should, based on Geneva’s first ten days, undertake a thorough interagency review of Syria policy and provide the president options and recommendations. Geneva II cannot work, either in terms of political transition or humanitarian relief, unless and until the regime’s calculation with respect to negotiations changes. Iran and Russia are not likely to do any heavy lifting to change that calculation. Their guy is doing well militarily, and that is good for them. So long as their client has the military tools to inflict mass terror on civilian populations, innocent civilians will die and US allies and friends will bear the prohibitive secondary costs in terms of refugee flows and security blow-back.

Geneva II threatens to be the emptiest of gestures unless the United States and its allies get serious about changing calculations and shaping the diplomatic battlefield. Geneva II cannot for long substitute for options discarded. Those options must be revived, and quickly.