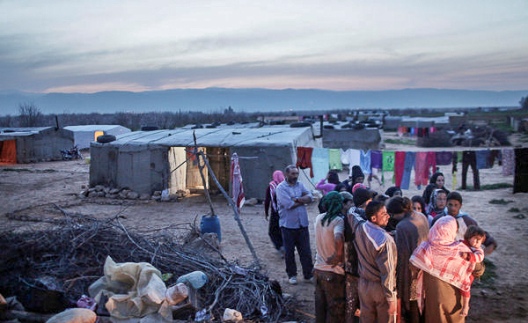 In the latest, horrifying turn of events in Syria’s protracted civil war, videos surfaced showing the aftermath of an alleged chemical attack in Damascus. With a US military strike on Syria seemingly imminent, all eyes are on the escalation of tensions between Western and regional powers. Yet the result of such violence is playing out just as dramatically in the rapidly intensifying movement of thousands of Syrians into neighboring countries. The presence of an estimated one million Syrian refugees in Lebanon—a quarter of the population—is not the first refugee crisis the country has dealt with: starting in 1948, thousands of Palestinians arrived in Lebanon. The sight of Syrians begging on the streets of Beirut and setting up tents in the Bekaa Valley is a stark reminder of Lebanon’s historic failure to integrate its Palestinian refugee population and the brewing security threat created by large numbers of discontented refugees.

In adopting a non-policy towards Syrian refugees, the Lebanese government has left their treatment in the hands of individual communities and international aid organizations. In a recently published report, the UNHCR recommended that Lebanon set up “transit sites” to mitigate the problem of finding shelter for Syrian refugees. Moreover, reports suggest that the UN is pressing the Lebanese government to find a more “semi-permanent” solution: namely, camps. From the perspective of international aid organizations, camps make it easier to deliver aid and channel resources. For a Lebanese government struggling to control spillover from the Syrian conflict, establishing camps may seem to allow authorities to exert modicum of control over refugees.

Yet placing the current situation in the context of Lebanon’s history with Palestinian refugees potently illustrates that the assurance of stability and improved treatment of refugees that comes with camps is false. Though almost 10 percent of people living in Lebanon are descendents of Palestinians who arrived in 1967, Palestinians remain a separate and unequal class in Lebanese society. Denied citizenship, the ability to work in over seventy professions, freedom of movement, and complete access to health and social services, Palestinians in Lebanon are trapped in a state of perpetual poverty. Beyond the humanitarian objections evident in this situation is the very real instability building in Palestinian refugee camps, where Palestinian nationalist groups and Islamist factions grapple for power with sometimes violent results. Lebanon’s divided stance on Syria is intensified in Palestinian refugee camps such as Ain al-Helweh, where Hezbollah’s support for Syria has been met with Palestinian demonstrations of anger such as the burning of food aid.

The experience of Lebanon’s regional neighbors in responding to the refugee crisis with camps illustrates the administrative challenges inherent in this policy response. Sheer numbers present a huge obstacle to maintaining acceptable standards of humanitarian treatment and security in camps. To the south, Jordan is on track to build a third refugee camp in the city of Azraq that will hold 500,000 refugees. A recent UN report painted an alarming picture of organized crime and recruitment of child soldiers in Jordan’s Zaatari refugee camp. “We had no idea it would grow so big,” admitted one UN official. In Turkey, twenty camps failed to accommodate the refugee population, leaving an excess of 300,000 refugees outside the camp system. The struggle to find land for camps is such that Turkey is working in cooperation with aid organizations towards a cash assistance program in order to avoid the problem of camp management. A barely functioning Lebanese government is not prepared for the administrative challenge of building and managing camps.

At the same time, the prospects for Syrian integration into Lebanese society are declining. The urge blame foreign actors and “outside influences” for such events as the deadly bombing of a Beirut suburb and the kidnapping of Turkish pilots could have serious negative repercussions on Syrian refugees. Revealingly, several cities resorted to imposing curfews on foreigners: “By foreigners, I mean Syrians. But I’ve worded it such that I won’t be labeled a racist,” explained the mayor of a small Christian town. Political rhetoric reflects this strain of xenophobia. Michel Aoun’s Change and Reform bloc made a statement advocating for the closure of the Lebanese border to Syrian refugees, explaining blithely that there are safe areas within Syria. The imposition of a $200 fee on incoming refugees starting August 29 may be a prelude to increased internal restrictions on refugees. These developments point to a worrying trend of anti-Syrian sentiment brewing in both Lebanese society and government that could manifest in a repressive legal framework for dealing with Syrian refugees similar to that for Palestinian refugees.

Ex-ambassador Ryan Crocker’s dire prediction for the future of the Syrian resistance suggests that Syrian refugees are likely to become a long-term fixture in Lebanese society. Pressure is mounting for the government to come up with a policy that will address presence of a projected two million refugees by the end of 2013 according to Interior Minister Marwan Charbel. Lebanon must now navigate between the impulse to react against Syrian refugees based on fear and the pressure to establish refugee camps. The UN’s development of an emergency plan to accommodate Syrian refugees in the wake of a military strike signals the urgency of the situation. From both a security and a humanitarian standpoint, Lebanon’s policy response should focus on furthering efforts to register Syrian refugees, funneling much-needed aid to cash assistance for refugees, and seriously considering how to integrate Syrian refugees into Lebanese society without repeating the mistakes of the past.

Rachel Webb is an intern with the Rafik Hariri Center for the Middle East.