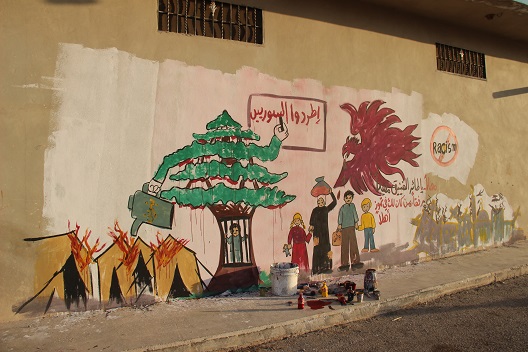 Ongoing discrimination and anti-refugee rhetoric in Lebanon are leaving desperate Syrians with two dismal options: to live under harsh conditions in Lebanon or return to Syria with worse conditions and even less stability.

The presence of around 1.5 million Syrian refugees in Lebanon is viewed by many Lebanese as a heavy burden and a threat to the country’s security. Syrian refugees are often blamed for everything that goes wrong in Lebanon—including the country’s social, economic, and political woes—and face various forms of discrimination, racism, and abuse. Anti-refugee sentiment is perpetuated by Lebanese actors, journalists, and media. Lebanese leaders from across the political spectrum utilize anti-refugee rhetoric and look for ways to push Syrians to go back home.

At a conference organized in June, by the Free Patriotic Movement to discuss refugee return, Bassil announced that “we will not accept Lebanese to stay without jobs while Syrian refugees work illegally.” According to Basil, only 5,000 Syrians are authorized to work in Lebanon. It is thus “within the power of local authorities to prevent Syrians from working, except in farming, cleaning, and construction,” as Basil declared in the conference. Subsequently, tens of campaigners from Gebran Bassil’s Free Patriotic Movement protested in front of Syrian shops, shouting “Syria, you must leave!” Flyers were also distributed, calling on Lebanese to “protect Lebanese workers and report violators.”

Lebanese politicians continue to present the refugee issue as “the obstacle” to Lebanon’s growth and development, emphasizing that Lebanon can’t move forward as long as it hosts Syrians. “We can’t save our economy when 1.5 million non-Lebanese are working in our places,” declared Basil in May. Lebanese authorities, supported by many of its citizens, are intensifying institutionalized discrimination and systematic violations to push Syrians back home whether it is safe to return or not.

In April, the Lebanese government announced that it would be dismantling houses of Syrian refugees in the town of Arsal if housing was incompatible with new planning rules—which require any walls higher than five rows of bricks to be demolished—in order to avoid permanent refugee housing communities. Refugees themselves tore down the homes they lived in just to comply and not be forced to leave. However, at least 20 concrete settlements in Arsal were demolished by Lebanese authorities last Monday after the July 1 deadline. Aid groups estimated that the decision would impact about 15,000 people, including many children, living in 3,000 homes.

In addition, hundreds more Syrian refugees were displaced and their tents dismantled in recent escalations. Last month, Lebanese authorities ordered the evacuation of dozens of Syrian refugees in eastern Lebanon following a brawl with locals. Hundreds of Syrians were also left homeless after a refugee camp in Deir al-Ahmar was set on fire in early June by “unknown attackers.”

Lebanese authorities have also been deporting registered refugees and forcing them to sign “voluntary repatriation forms.” It is estimated that some thirty Syrians were deported from Hariri International Airport in Beirut this year, despite Lebanon’s obligation “not to return or extradite anyone if there are substantial grounds for believing the person would be in danger of being subjected to torture,” according to HRW.

Lebanese authorities also forced refugees to return to Syria in 2018 due to an agreement between the Lebanese and Syria governments to send refugees to “safe areas” in Syria. It is reported that the security office in the city of Zgharta confiscated identification documents of refugees as they sought to renew their residency permits. The refugees where then forced to sign voluntary return forms to return to Syria. Refugees in other areas were also mislead into signing what they were told were registry documents. They were then notified that they had instead signed an agreement to go back to Syria within a month.

Yet, Lebanese politicians justify their actions by claiming that Syrian refugees are no longer living in fear, and therefore there is no reason for them to stay in Lebanon. But despite Assads’ claims of victory and politicians’ narratives of stability and security, Syria today might not be any safer than it was before.

The Assad regime and its allies continue to commit all forms of human rights violations against civilians. Hundreds of thousands of Syrians are still missing in Assad’s prisons—and many are still dying under torture. People living in war-weary Syria continue to be deprived of their most basic rights, their freedoms, their properties, and dignity—and the reality doesn’t get less depressing for returnees, as many politicians like to propose.

Those who return to Syria are often seen by the regime as part of the opposition. They are thus subjected to arbitrary detention, enforced disappearance, torture, and persecution. Returnees are also vulnerable to property seizure under Law No.10—a property legislation passed by the Syrian government last year, giving property owners only thirty days to claim the ownership of their property. Furthermore, returning men between the ages of 18 and 49, who haven’t served in Syria’s army, are forced into mandatory military service after six months of their return, and are often required to pay fines.

Numerous debates have been taking place on the “refugee crisis” and the return of Syrian refugees, but little is discussed about the fate of returnees or actions taken to assure them a dignified and peaceful return. Many Syrians dream of returning to their homes, but they fear repercussions from the regime. The main problem, therefore, lies not in Syrian refugees—in their presence or return—but in the conditions preventing them from going back.

Instead of fueling hatred against Syrians, implementing all forms of discrimination to force them into voluntary return, and blaming them for every state failure;—as Lebanon and other host countries are doing—it might be time to take a serious look at the cause of the problem and propose practical measures to ensure the safety of Syrian returnees.

No meaningful return can take place without changing the political reality in Syria. It is time for the international community to provide a legal framework to start holding the Assad regime accountable for its actions. Strict measures must be enforced to limit the authority of the Syrian regime and its security forces to stop it from subjecting Syrians to arbitrary policies. Laws that enable the regime to arrest, torture, and mistreat Syrians, as well as seize their lands and propriety must be repealed. Serious efforts must be taken to enable a greater presence of international organizations inside Syria to ensure the security, rights, and freedoms of the returnees.

And meanwhile, increasing pressures should be placed on host countries to adhere to international standards in dealing with refugees—both in the context of refugee settlement and return. The international community should also step up its efforts to provide necessary and efficient support to displaced Syrians and ensure their right to uphold voluntary return.

Image: Photo: A mural by Syrian artist Aziz al Asmar depicting racism against Syrians in Lebanon, with Arabic writing that reads, “Get Syrians out! Hey, hey, phoenix bird, be kind to those who welcomed you in Tammuz (referring to the 2006 Lebanese war).” June 26, 2019. Mohamad Daboul. Photo provided by author.