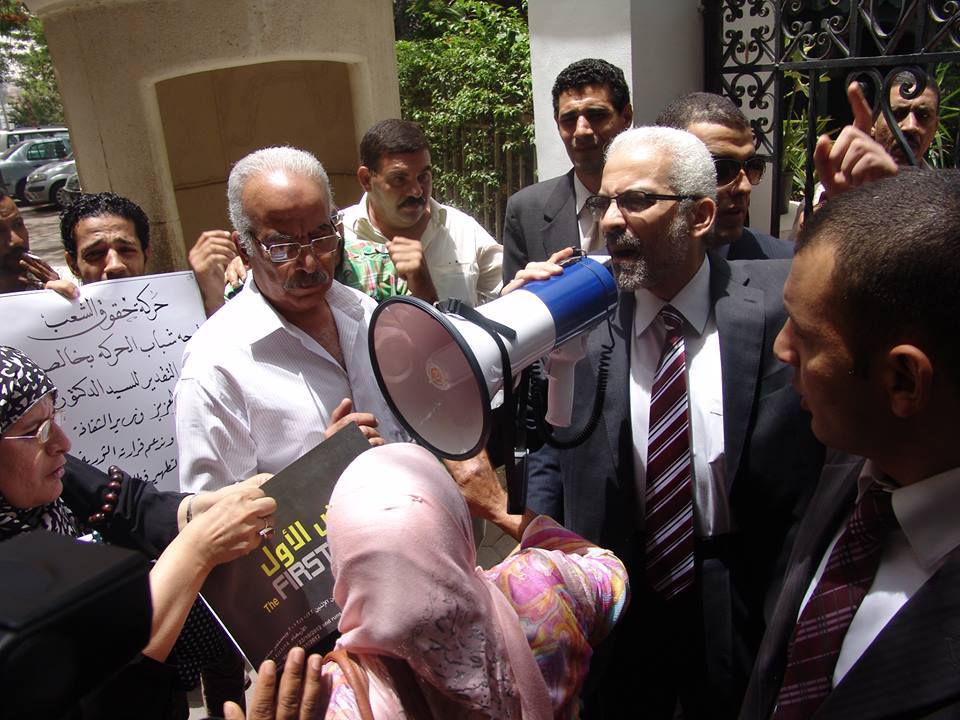 As the curtain rose for the Cairo Opera House’s annual performance of Verdi’s Aida last Tuesday, performers joined their voices not in song, but in chants of protest against the newly appointed Minister of Culture, Alaa Abdel-Aziz. To the audience’s cheers and support, Opera House staff and performers announced they would remain on strike until Abdel-Aziz is removed, escalating protests that have grown since the controversial minister was appointed by President Mohamed Morsi during the May 6 cabinet reshuffle.

The Minister of Culture post has seen a high turnover rate in the past two years. Abdel-Aziz is the sixth in a series of ministers appointed since Egypt’s January 25th revolution began, following the 24-year reign of Farouk Hosni, the Mubarak-era minister currently facing corruption charges. Many of the post-January 25th ministers hailed from the Supreme Council of Culture, a key arm of Egypt’s state cultural apparatus responsible for ministry policies, activities and granting of state cultural prizes.

As a professor at the High Institute of Cinema, Abdel-Aziz comes from a different cultural background from his predecessors. Critics claim he lacks the experience and academic strength required for the position, and has no record of significant contributions to Egyptian culture. His political leanings are a further source of distrust for Egypt’s arts community – Abdel-Aziz has come under fire for his writings in the FJP newspaper critical of the opposition movement against Morsi, which he has described as ‘counter-revolutionary,’ and ‘exaggerated by the media.’”

Abdel-Aziz’s appointment was met with swift resistance – a week later, members of Egypt’s cultural community collected more than 200 signatures of those opposed to the new minister. Led by the Egyptian Creativity Front, artists and intellectuals marched from the Cairo Opera House to the culture minister’s office in Zamalek, protesting the Muslim Brotherhood’s influence on Egypt’s culture institutions.

Abdel-Aziz responded to his critics saying that he aimed to bring new blood into Egypt’s culture sector, as well as a new vision that reflected the spirit of the January 25th revolution. Yet tensions rose further over Abdel-Aziz’s interference with the 35th Annual General Art Exhibition – the minister had attempted to remove a number of pieces of art from the exhibition, a move met with outrage by the curatorial committee.

Artists’ fears proved not to be unfounded – within his first few weeks in office, Abdel-Aziz dismissed three respected senior culture ministry officials without explanation: Ahmed Megahed, head of the General Egyptian Book Organization; Salah El Meligy, head of the Applied Arts department; and Inas Abdel Dayem, head of the Cairo Opera House, who he replaced with Badr El-Zakaziky. He unsuccessfully attempted to fire Sameh Mahran, head of the Academy of Arts, and decided not to renew the term of the head of the Egyptian National Library and Archives (NLA), instead replacing him with the Islamist-leaning Arabic literature professor, Khaled Fahmy.

“This is the first time culture and arts are subjected to such a fierce attack,” said Nayer Nagui, principle conductor and artistic director of the Cairo Opera Orchestra in an interview with Ahram Online. “Arts and culture aren’t only a single red line but a multitude of red lines and that culture is the glue that keeps this society together. If culture collapses, the whole society collapses.”

A number of important members of the Supreme Council for Culture (SCC) have stepped down in response to the dismissals, including acclaimed novelist Bahaa Taher, head of the Ministry’s foreign relations department Camillia Sobhy, and secretary-general of the SCC Professor Said Tawfik, who decried Abdel-Aziz’s actions as “a plan to destroy Egyptian culture.”

Protests in front of the Opera house escalated over the weekend as artists, filmmakers, musicians, actors and dancers joined to denounce Morsi, Abdel-Aziz, and the Muslim Brotherhood’s influence on culture in Egypt. Abdel-Aziz has responded to calls for his resignation by saying that his decisions aim to eradicate corruption from the Ministry and support a new generation of young artists, and that he will not bow to the demands of the ‘counter-revolution.’

The appointment of Abdel Aziz is seen by many as part of a broader effort by Morsi to ensure the ‘Brotherhoodization’ of various ministries and governmental posts, extending the party’s reach both in personnel and policy. Abdel-Aziz has not imposed any restrictions on the arts, but many artists and intellectuals fear such steps are just around the corner. His appointment also comes against the backdrop of parliamentary threats to the state’s culture budget as well as broader artistic freedoms.

Earlier in the week, conservative members of Egypt’s Shura Council (the upper house of Parliament) had recommended that both the SCC budget and the monetary value of state culture and arts prizes be reduced. Meanwhile, Shura Council member Gamal Hamid of the Nour party called for the abolition of ballet in Egypt, describing it as “immoral” and “nude art,” and another MP described ballet as “the art of spreading obscenity among the people.”

The protests also illuminate the divide between Egypt’s state and independent art scenes, with those who frequent the independent scene dismissive of the Ministry, given its history of being used to advance the state’s agenda. “The Ministry of Culture is the same as it was under Mubarak, just with new faces,” says author Muhammad Aladdin. “It still has a narrow and opportunistic understanding of Islam and culture. The real problem with the Ministry of Culture is the idea that culture can enlighten the masses, because funding can be used to push their agenda or ideas.”

Aladdin’s thoughts illustrate the persistent conundrum of reform under Morsi: even if members of the artistic community desire change within the Ministry, a Brotherhood-appointed minister would not be trusted to enact it – particularly in the Ministry of Culture, given the arts community’s historically liberal and revolutionary political stance. On Tuesday, the new Opera House head appointed by Abdel-Aziz resumed the Opera’s activities and performances. A day later, a number of prominent artists and intellectuals broke into and occupied the Ministry of Culture itself, declaring a sit-in inside the building until Abdel-Aziz is replaced, and proving that the debate over the Ministry of Culture’s leadership – as well as its role in Egypt’s cultural scene – will continue.

Elisabeth Jaquette is a graduate student in Anthropology at Columbia University and a 2012-2013 CASA (Center for Arabic Study Abroad) fellow at the American University in Cairo. She has been based in Cairo since 2007 and tweets at @lissiejaquette.