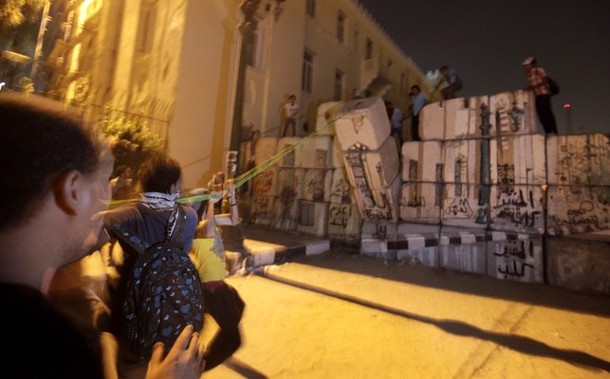 As the pull to Tahrir Square has waned, some political activists have been occupying some of their time with the task of taking down Cairo’s walls – literally. At the height of clashes between protesters and riot police, the military erected several walls in Cairo’s downtown streets, all of which lead to the Ministry of Interior. The walls, which have proved to be a very real impediment in people’s daily lives, have also become a symbol for the way in which the then-ruling military addressed political issues. Activists have responded in their own creative, and equally symbolic ways. Graffiti artists took to the walls in a form of political expression, a defiant art which has been followed by the act of removing the large blocks of concrete, one by one.

The Egyptian news website, Ahram Online, reports that, last night, scores of activists, all of which have no political affiliations, have been working to remove the wall in Sheikh Rihan Street, which has been there since last December. This wall has featured some of the most striking graffiti, where an artist painted the scene of the street itself, giving onlookers the illusion that the wall simply did not exist, if only for a split second.

While the practice of taking down these walls does not attract the large crowds that Tahrir has often commanded, hardcore activists, and in some cases local residents, have responded to calls, organized under the banner, ‘Opening the streets of downtown’ Cairo. The Sheikh Rihan Wall is the third wall that activists have attempted to dismantle. While activists focus their energies on manually dismantling these walls, for the first time, security forces have been involved in the same, strangely parallel, act. For reasons that remain unclear, on Thursday, security forces tackled the wall in Noubar Street, a wall which has also been in place since February, built during a series of clashes that left at least two protesters dead.

Residents of downtown Cairo state that the walls have had a detrimental effect on businesses in the area, and had threatened to file a lawsuit against the government as a result. Shops, kiosks and street sellers have felt the brunt of it, with all pedestrian traffic routed to other streets. Some residents are said to have left their apartments, while one shop owner claims that he lost 40,000 Egyptian Pounds (approximately $6,500) in the period from November to March, as a direct result of one of these walls.

The act of taking down the downtown walls has often been a night-time project, done at considerable risk, and is one of many tools that activists continue to use to make their voices heard. The No to Military Trials campaign continues to organize marches and rallies, as activists and citizens continue to be subjected to military tribunals. Some have also turned an eye to regional events, focusing on the ongoing brutal crackdown on the Syrian uprising.

Tahrir, a symbol of the uprising, has been a focal point of Egypt’s political activism since January, 2011, and with that has come a struggle over ownership of the square, a struggle that has often taken place between the country’s Islamist and secular factions. On the occasions when Tahrir has been shared by different ideologies, as political activists, politicians and supporters of Egypt’s fractured political scene take to the square, opposing sides of the spectrum have butted heads, while some have been denied entry altogether. The so-called Million Man Marches, and Tahrir Square itself, appear to have lost some of their allure, as many are feeling the fatigue of the past 18 months.

The importance of taking down these walls, on the other hand, is still very much intact. The first walls came down in February and March, but as calls to gather in Tahrir recede, a small group of activists are once again focusing on the periphery of the square, in an attempt to re-open the city’s streets, and restore a sense of normalcy to the downtown area.