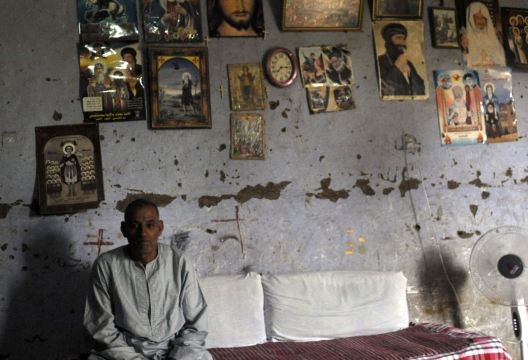 Dr. Mahmoud Dahroug, a man of over sixty, lives in a constant state of suspense, fearing he will be arrested to serve a five-year prison sentence issued against him late last year for being a Shiite. Most of his acquaintances have distanced themselves from him, and Dahroug spends his time reading and surfing the Internet at home. He only goes out when absolutely necessary.

Fouad Dawoud, a Christian sentenced to one year in prison in September 2013 for contempt of religion, moves from village to village in search of work. He lives in hiding, fearing for his life, after having shared a Facebook post some viewed as offensive to Islam. At the time, his fellow villagers attacked his home, calling for him to leave, and even temporarily displaced some of his family members. Dawoud fled from Radeseya to Edfu, north of the Aswan governorate, to Abu Simbel, 400km to the south, and later to Cairo, almost 1,500 km north. His current location is unknown. He has worked as a sales representative prior to his trial, and has since held various jobs, including working as an agricultural laborer, a janitor, and a driver. None of these jobs have been sufficient in providing for family’s needs, as they struggle make ends meet.

After announcing that he is an atheist of Facebook, Karim al-Banna’s photo, along with those of other self-declared atheists, was published in a local newspaper. As a result, al-Banna was physically assaulted by other town residents. When he tried to file a complaint against them, police arrested him under the pretext that reports were filed against him for contempt of Islam. On January 11, al-Banna was sentenced to three years in prison. He was allowed to pay EGP 1,000 bail to suspend the sentence pending appeal. The Idku Misdemeanors Court of Appeal, however, upheld the ruling on March 9, and al-Banna must, accordingly, hand himself over to begin serving his sentence so he can appeal the ruling, which is the last stage of the litigation process.

Michael Mounir Beshay did not fare any better than the above cases. In November 2014, the young man posted a video clip from a program on the satellite network, al-Qahera wal-Nas. In it, Mohamed Abdullah Nasr, known to the public as Sheikh Mezo, was discussing the Hadith on the “suckling of adults.” For several months, the video went unnoticed until in February 2015, when dozens of Muslim villagers from Damian, in the Daqahliya governorate, demonstrated in front of his house. They called for Beshay to be charged with contempt of religion, and set fire to his motorcycle. At the time, Beshay was at the textile factory in Damietta where he works. His employer was informed of the incident, and was asked to prevent Beshay from leaving work. Soon after, Bilqas security forces arrested Beshay at his place of work. Police also arrested his fiancée, detaining her for two days for questioning, before she was released. Beshay remains on trial after the Misdemeanors Court ruled that the case did not fall under its jurisdiction and referred it to the public prosecutor. The case was later referred to the Economic Court responsible for handling online crime. Beshay remains in custody, awaiting his fate.

Most recently, Younan Gad Youssef, a teacher, together with four of his students—all Christian—were charged with contempt of religion and posing a threat to national unity. The Public Prosecutor ordered them detained pending investigations. This all came about because the students had put on a performance that lasted less than a minute during their end of school year trip in 2014, where they made fun of the Islamic State (ISIS), the group that later beheaded twenty Copts in February 2015. Earlier in April, the teacher lost his phone sim card which had a video recording of the students’ performance. When the video was discovered, some of his fellow Muslim villagers were incensed. They took to the streets chanting against the Copts in the village and ransacking a number of their houses. They attempted to attack village churches, but other Muslim villagers were able to stop them. On April 17, a ‘reconciliation meeting’ was arranged under the supervision of an assistant to the Minister of Interior, the security commander, and popular leadership in the village. In the meeting, the Church pastor and congregation apologized for the incident and it was decided that the teacher together with his wife and children should leave the village and the legal proceedings continue.

Dozen other citizens have fallen victim to the vague charge of “contempt of religion.” Some are currently serving jail time, while others face the societal punishment of forced displacement and isolation. The political regime may have changed, but the popular, security, and judicial prosecution remains opposed to expression of opinions that contradict, or are believed to contradict, the predominant Sunni faith.

In its capacity documenting these and other cases, human rights organization, the Egyptian Initiative for Personal Rights (EIPR), has witnessed a disturbing increase in tensions, violence, and trials related to contempt of religion following the January 25 Revolution.

EIPR documented forty-eight cases of tension, and popular and judicial persecution related to contempt of religion from January 2011 through the end of 2013. In some of these cases, the punishment was limited to unofficial sanctions imposed by civilians or legal violations like forced displacement. In other cases, employers fired the accused or cut their salaries. A total of twenty-eight cases were decided by different courts during this period: three cases in 2011, twelve in 2012, and thirteen in 2013. During this period, of the forty-two defendants charged, twenty-eight were convicted, and three were acquitted. Eleven cases were dismissed due to not being filed by competent parties. A number of cases are still pending before the public prosecutor, neither referred to the relevant courts nor dismissed.

Defendants in these cases are prosecuted under three articles of the Egyptian Penal Code. The Public Prosecution and Judiciary can invoke Articles 160 and 161 of the Penal Code. Article 160 criminalizes interruptions to religious ceremonies, vandalism of houses of worship, or religious symbols venerated by certain religious sects. Article 161, also known as “aggressions against religions,” criminalizes misprints of religious scriptures and the public mocking of religious rites through parody.

More often however, they most commonly invoke Article 98(f), known as the “contempt of religions” provision. In 1981, the government proposed Article 98(f) to parliament as an amendment to Article 160, after a sectarian incident in al-Zawiya al-Hamra. On June 17, 1981, dozens of Christians were killed and their homes attacked, when a rumor emerged that land allocated for a mosque was to be given to a church. Article 98(f) was introduced in an attempt to contain hostile Islamic discourse against Christians, and to address sectarian attacks and incitement. It has, however, been used instead to harass religious minorities, and others, with contempt of religion charges.

The wording of the article was characterized by:

Cases of Egyptian citizens targeted for perceived blasphemy have taken two forms of persecution; the first is an escalated crackdown on freedoms of belief, opinion, and expression by ordinary citizens. They involve victims who are not necessarily well-known thinkers or public figures, as has been the case over the last two decades. Religious minorities like Copts, Shiites, and atheists are more vulnerable to this type of abuse, but contempt of religion cases have not been limited to pursuing followers of these minorities or religious doctrines that contradict the majority of Egyptians’ faith. In many cases, the victims of these charges are followers of Sunni Islam—the doctrine adopted by Egyptian Islamic religious institutions. Most of these cases originate from disputes over ideological matters, or opinions published by citizens on their private social networking accounts.

The second form of persecution is seen in the various cases filed by Islamist lawyers against writers and intellectuals accusing them of contempt of religion. Examples include actor Adel Imam, screenwriter Wahid Hamid, and cartoonist Mustafa Hussein before his death, and most recently the journalist Fatima Naoot.

The persistence of these cases indicates that the political regime, whether Islamist, military, or civilian, is tolerant of such violations and utilizes them to win over religious institutions and popular conservative constituencies, proving that religious freedom and freedom of opinion and expression in Egypt remain at risk.

Ishak Ibrahim is a journalist and researcher focusing on religious minorities. He works for the Egyptian Initiative for Personal Rights working on issues relating to religious freedom.

Image: Photo: Abied Abdel-Nour, father of Dimiana, a Christian schoolteacher, is pictured in his home in Luxor, about 721 km (448 miles) northeast of Cairo, June 10, 2013. According to local media, the Luxor Misdemeanor Court on Tuesday fined Dimiana LE 100,000 ($14,303.90). Dimiana, who was arrested on 15 May, 2013 was accused by her Muslim students' parents of insulting Islam and comparing it to Christianity by saying that the late Coptic Pope Shenouda was better than the Prophet Mohammad. Picture taken June 10, 2013. (Reuters)