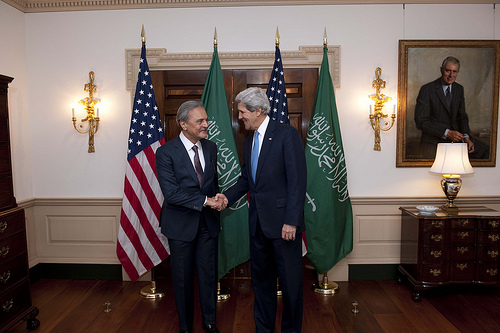 It is likely that every American president since George Washington has joked with his advisers that he would love to have the absolute power wielded by some of his fellow world leaders. With such authority, he could deal decisively with pesky domestic critics, unruly media, or noisy civil society groups. Occasionally a president has imposed emergency laws (Abraham Lincoln and Franklin Roosevelt), carried out "dirty tricks" against critics (Richard Nixon), or stretched the rules of domestic surveillance (George W. Bush). But such practices tend to be aberrations and usually evoke a corrective response from the judiciary, Congress or the public.

Such systemic give and take is alien to many regimes in the Middle East, whether they are led by monarchs or by civilians who monopolize power. In the Gulf, royal families view themselves as the ultimate legitimate leaders. They are skeptical of the merits or the effectiveness of systems of shared power. They believe the fact that they have survived and their countries have thrived for the most part indicates their future durability.

One can only imagine the pained reactions in Riyadh, Abu Dhabi, or Manama when they read Jordanian King Abdullah’s recent comments to an American reporter suggesting that his son would be the monarch in a "Western democracy with a constitutional monarchy." The Gulf leaders want to be rulers—not mere symbols—and are taking a variety of steps beyond the normal generous benefits to citizens to try to ensure their longevity. For example, there are sharp crackdowns on any evidence of political organizing by Islamists in the United Arab Emirates (UAE), enforcement of laws against criticizing the ruler in Kuwait, and attempts to limit discourse about the king on social media in Bahrain.

Some of these crackdowns are reactions to manifestations in the Gulf of the "awakening" elsewhere in the region, which the Gulf monarchies view largely as a threat, and not as a way to make gradual, progressive reforms. Marc Lynch has dissected the costs of mocking a monarch in the Gulf and suggests that prosecuting people for criticism "is the surest sign that they (monarchs) are losing." Indeed, energetic stifling of criticism will not eliminate it and risks further erosion of legitimacy.

To protect US interests, senior American policymakers, including the president, need to engage their Gulf counterparts in a sustained dialogue about internal political developments. These difficult conversations have tended to fall off the bottom of agendas between US presidents and Gulf leaders, as they deal with pressing issues of the day. Such neglect was evident in the policy confusion that emerged during and after the Tunisian and Egyptian revolutions, as Washington floundered to define its interests and have some impact on developments. Leader-to-leader discussions do not replace US engagement across a broad spectrum of Gulf populations. But given the political structures of the Gulf, these talks are absolutely necessary and are too late if they come only at the moment of crisis.

Why So Little Concern?

During his conversations with Gulf leaders recently in Washington, it is unlikely that U.S. president Barack Obama raised human-rights concerns with Abu Dhabi crown prince Mohammed bin Zayed al-Nahyan or discussed allowing greater dissent with Saudi foreign minister Saud al-Faisal. Nor did he likely suggest that the Amir of Qatar rescind the sentence of a recently jailed poet. In the hierarchy of US interests in the Gulf, internal political developments rank well below many other issues. Why?

First, there is no clear and present crisis. Domestic politics have become complicated and tense in Bahrain and Kuwait, for example, but they do not compare with the wholesale slaughter of citizens in Syria, nor to the wholesale violation of human rights in Iran. In fact, one poll finds that "the UAE is country where most Arab youth would like to live." Second, the United States has strong, shared security interests with Gulf states, ranging from concerns about Iran and Syria to counterterrorism cooperation. The Gulf states are accommodating of U.S. military presence in Bahrain, Kuwait, Qatar, and the UAE, for which they pick up a good portion of the bill. Third, economic and commercial ties are very important to the U.S. economy. The free flow of oil is still critical. Gulf treasuries own vast amounts of US debt, Gulf consumers buy huge amounts of US goods and services, and Gulf states are major customers for US defense exports.

Given the web of shared interests that bind the Gulf and the United States, it is not surprising that human rights and internal political developments do not gain more prominence in bilateral relations. The State Department’s annual human-rights report has become an annoying sideshow in the Gulf and elsewhere—the report provides well-documented information but is not integrated into other aspects of US policy. Meanwhile, some of the Gulf states are adept at building goodwill in Washington, including through generous support for educational institutions, think tanks, disaster relief and other philanthropic endeavors.

Serving as a diplomat at the US embassies in Cairo and Kuwait, I was part of the apparatus in which the interests of the day dominated and little attention was given to longer-range issues. When I served in Kuwait from 2004 to 2007, the main US interest was to provide logistical support for our forces in Iraq. The Kuwaitis provided such support for much longer and at much greater expense than they expected when the Iraq war was launched. (Recall that US policymakers thought it would take just a few months to conclude.) Of course it served their interests as well, but the Iraq war would have been a lot more expensive for US taxpayers had, for example, the Kuwaitis not donated virtually every drop of fuel for UScombat vehicles and planes. To its credit, the Bush administration simultaneously pushed for the enfranchisement of women in Kuwait, and the Kuwaiti leadership got the message. But there were no discussions at high levels concerning the durability of the Kuwaiti model of government, which was already showing the strains that are more evident now.

While I was at the US embassy in Cairo from 1998 to 2001, before every visit by then president Hosni Mubarak to Washington, the embassy would almost ritualistically recommend to Washington that it have "the conversation" with Mubarak about how to unfreeze the political system in Egypt. That exchange was one that would need to be between presidents, without note takers, and not just once. US "suggestions" would include rescinding the emergency law, figuring out how to allow viable opposition parties and backing off from the government’s media domination. To my knowledge, that conversation never took place, and it certainly did not occur in a sustained way over time.

How Things Could Change

In the near term, the Gulf states are unlikely to face the kind of existential crisis that Mubarak and former Tunisian president Zine El Abidine Ben Ali encountered in 2011. But one should also recall that not a single Middle East expert predicted the timing or the depth of the changes in Egypt or Tunisia. The Gulf is not immune to social and political change. While I do not share Bruce Riedel’s bleak portrayal of the situation in Saudi Arabia, I certainly agree with his assessment that there is a clear US interest in a better understanding of both the underlying dynamics of the transitions taking place in the al-Saud family and (perhaps more crucially) the undercurrents of fundamental change occurring in that country.

Conversations with our friends about their domestic political issues are obviously awkward and uncomfortable, but no less necessary. The United States has long-term interests that it needs to protect: US policymakers have an obligation to anticipate surprises and be positioned to deal with them. In addition to good intelligence based on a wide range of sustained contact across the breadth of Gulf societies, the United States needs to be able to speak frankly to Gulf leaders about tough issues before crises emerge, in part so that we can have a constructive role when they inevitably do appear. The U.S. policy confusion and mixed signals in the last days of the Mubarak regime were painful to observe and served neither US nor Egyptian interests.

We do not know what might spark fundamental change in the Gulf, just as we did not know Mohamed Bouazizi’s name until he became the symbol of revolution in Tunisia. Change in the Gulf could come suddenly and unexpectedly, or as a result of an accretion of grievances and failed responses. Alternatively transitions could occur over time through conscious actions by the leaders in the region. We should not rule out that one or more of these families will develop a model to respond and include their publics in political systems that can evolve into a hybrid between multiparty democracy and constitutional monarchy.

The wave of change in the Middle East, both outside the Gulf and within it, needs to take its proper place in the US bilateral agenda with Gulf states. The dialogue needs to be sustained and needs to take place quietly, but not be limited to leaders. Long-term interests demand that the United States be well positioned to understand and absorb changes ahead. That requires honest and ongoing engagement at various levels, both official and unofficial.

Richard LeBaron is a senior fellow with the Rafik Hariri Center for the Middle East . This piece originally appeared in the National Interest. Photo Credit.