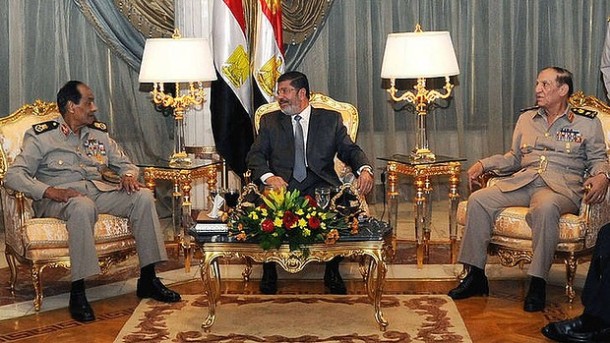 Most signs pointed towards former Defense Minister Hussein Tantawi and former Chief of Staff Sami Anan quietly accepting their dismissal at the hands of President Mohamed Morsi on Monday. Their acquiescence is now confirmed after appearing at the presidential palace to receive medals of honor, presented to them by Morsi himself.

Morsi ordered their retirement, softening the blow with the Nile Medal, the highest state honor presented to Tantawi and the State Medal, presented to Anan. More importantly, Morsi appointed them as presidential advisers.

Tantawi and Anan’s appearance in public puts to rest any rumors about the pair currently being under house arrest, as well as reinforcing the theory put forward by many of Egypt’s political thinkers: Tantawi and Anan will not be prosecuted as a result of Morsi’s power grab. Whether or not Tantawi and Anan were aware of the decision prior to its announcement remains unclear, but their appearance at the palace is a clear sign of acceptance.

The Supreme Council of the Armed Forces’(SCAF) preferred method of communicating with the people, its Facebook page, was updated on Monday, featuring one post detailing new Minister of Defense Abdel Fattah Al Sisi’s military career. The post appeared to be SCAF’s subtle way of conveying their acceptance of the new order of things, rather than publishing a detailed communiqué as has been their habit since February of last year.

In addition to Tantawi and Anan’s new positions, all army leaders swept up in the reshuffle have been awarded influential posts, the most significant of them going to former navy commander, Mohab Mamish, who is now Chairman of the Suez Canal Authority. Former Air Defense Commander Abdel Aziz Seif Eldin is now the chairman of the Arab Organization for Industrialization, and former Air Force Commander, Mahmoud Hafez is the new Minister of State for Military Production.

For Tantawi in particular, the new post is a clear sign of a safe exit for the formerly ruling military general. There have long been calls for Tantawi’s prosecution, alongside former president Hosni Mubarak, who is serving a life sentence in a Cairo prison, accused of failing to prevent the killing of protesters during the January 2011 uprising.

While protests, and protester deaths, continued long after Mubarak stepped down, Morsi’s ouster of Tantawi, which went off rather smoothly, appears to have been made in exchange for the latter avoiding the very same fate as Mubarak.