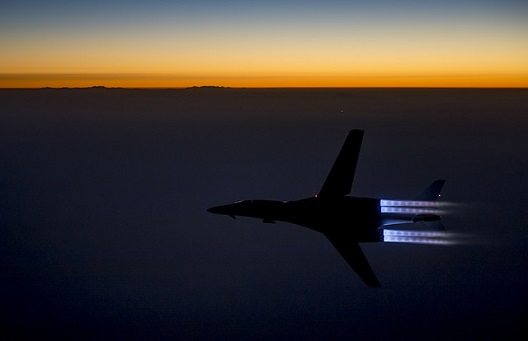 A US Air Force B-1B Lancer flies over northern Iraq after conducting air strikes in Syria against ISIL targets, Sept. 27, 2014. The strikes were conducted as part of the president's comprehensive strategy to degrade and ultimately destroy ISIS. (US Air Force photo by Senior Airman Matthew Bruch)

There is a belief in certain quarters of the Pentagon, and perhaps elsewhere in the executive branch, that the military mission of the campaign against the Islamic State in Iraq and al-Sham (ISIS, or ISIL) is to defeat ISIS in Iraq; that airstrikes in Syria are intended only to enhance the ability of the Iraqi Army and the Kurdish Peshmerga to defeat ISIS and restore the authority of the Iraqi government in the entire country. According to this particular point of view, Syria’s significance in the context of the anti-ISIS campaign is solely that of disrupting a secure rear-area for the self-proclaimed caliph and his forces: neutralize the ability of ISIS to use eastern Syria as a base for cross-border operations, and ISIS elements in Iraq can ultimately be isolated and destroyed. To the extent this line of reasoning represents or becomes administration policy, President Barack Obama will bequeath to his successor a metastasizing crisis of state failure affecting the entire region.

There is no doubt that Iraq is more important to the United States than Syria. Even were there not a legacy of sacrifice and hardship in Iraq exacted of America’s finest men and women, the current and potential importance of Iraq to world energy markets would place it higher than Syria on Washington’s national interest priority list. It is perfectly understandable that, in the counterterrorist battle against ISIS, priority of near-term effort goes to Iraq. Yet to treat Syria as a mere adjunct to the main event—as simply a sort of base camp from which operations in Iraq are mounted—would be to perpetuate this crisis to the disadvantage of Iraq and all of Syria’s neighbors.

State failure in Syria, brought about by the recklessly sectarian survival strategy of the Assad regime, is what enabled ISIS to arise from the ashes of al-Qaeda in Iraq and establish itself in Syria. The Obama administration downplayed and denied the significance of what was happening in Syria until ISIS suddenly erupted and flowed unimpeded over much of Iraq, making further denial unsustainable. Two beheadings later the administration finally thought the unthinkable: military operations in Syria were, at least against ISIS, unavoidable.

Various public statements by President Barack Obama and Secretary of State John Kerry have indicated keen awareness by both of the central role played by the Assad regime in facilitating the rise of ISIS and other al-Qaeda in Iraq descendants in Syria. Declining to cooperate, collaborate, or even communicate substantively with ISIS’s top recruiting agent was an easy call, despite advice to the contrary from regime apologists at home and abroad. Yet taking the next step—neutralizing the influence and effectiveness of ISIS’ number one asset in Syria—may not be part of the Obama administration’s approach to the overall problem posed by the ersatz caliph and his murderous followers.

Indicators that an “Iraq now, Syria maybe or never” policy may be in place are out there. The administration, on the one hand, has designated the armed, nationalist Syrian opposition as the ground component for the US-led coalition’s air campaign in Syria. Yet there seems to be a future tense aspect to this designation, one linked to the $500 million train-and-equip appropriation recently approved by Congress. The administration should be clearer to Congress and the public about what it means. Syrian nationalists are currently being besieged by regime and ISIS forces. Are they part of our fight or not? Is it remotely possible that the administration has in mind a ground component that would be ready to deploy by, say, 2017? If so, what does it think the combined effects of Assad and ISIS on Syria and the region will be between now and then?

A second indicator is the administration’s seeming differentiation between state failure in Iraq and Syria. In its September 10, 2014 “Fact Sheet: Strategy to Counter the Islamic State of Iraq and the Levant (ISIL),” the White House highlighted the objective of “Supporting effective governance in Iraq.” This is indeed a laudable objective: it is at the top of the list for a very good reason. Yet there is no parallel mention of the requirement to support effective governance in Syria anywhere on the objectives list. Instead, under the heading “Building partner capacity,” there is verbiage about training and equipping Syrian opposition fighters to defend neighborhoods “against ISIL incursions and ultimately push back on ISIL forces and the Assad regime.” Instead of flatly stating that supporting effective governance in Syria is a US objective, the following sentence was employed: “We will strengthen the opposition as the best counterweight to extremists like ISIL, while pursuing the political solution necessary to solve Syria’s crisis once and for all.”

Yet the pursuit of a political solution in Syria is frozen solid. It is so because Iran, with Russian support, has militarily solidified ISIS’s premier recruiting asset—Bashar al-Assad—in that part of Syria that matters to Tehran. To cite this pursuit as a key component of US policy without a strategy aimed at bringing it about would be to perpetuate a policy of empty gestures and words. How exactly do we expect millions of Syrians (who were on the receiving end of Assad regime war crimes and crimes against humanity long before the Assad-conjured ISIS appeared) to react to a clause about the nationalist opposition being “the best counterweight to extremists like ISIL” when the author could not even add the words “and the Assad regime”?

The administration is not clueless. It realizes it will not recruit the Syrian nationalist opposition to fight in one direction—against ISIS—while the Assad regime plasters it and its people from behind with artillery shells, chlorine canisters, and barrel bombs. It realizes that opposition forces in Aleppo will not hold out indefinitely against the combination of ISIS forces firing and maneuvering while regime forces inflict mass terror and destruction. Unless and until the administration takes action to help those it would recruit to the coalition cause, it would be fair to view the Syria side of the counterterrorist campaign as repackaged goods.

Even if it turns out that ISIS is overrated; even if airstrikes and ground operations defeat it in Iraq and even if airstrikes alone somehow marginalize it in Syria, this murdering monster will be among the walking undead absent effective governance in both Iraq and Syria. It was clear to the administration in Iraq that Maliki was a major part of the problem. Is it remotely possible that this is not blindingly obvious with respect to Assad in Syria? Does the administration really think that ISIS can be defeated by treating Syria as a mere condiment to an Iraqi main course? The answer will be forthcoming in the wake of actions, not words.