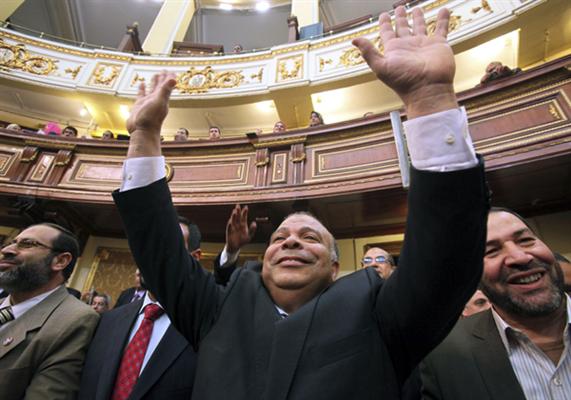 With Egypt’s marathon parliamentary electoral process now concluded, the country’s political forces are already debating how the soon-to-be drafted constitution should restructure the political system and recalibrate the balance of powers between the legislative and executive branches. Driving debates over the future of the political system are the Muslim Brotherhood’s Freedom and Justice Party (FJP), which swept 235 (47%) of the seats in the People’s Assembly, followed by the Salafi party Nour Party with 121 seats (24.3%). Despite early indications that the FJP might advocate transitioning from the current mixed presidential system to a parliamentary one (in which the ministers of the executive branch are drawn from the legislature), the FJP and other major parties have since backed down from this position, and now clearly favor adopting a mixed parliamentary-presidential system.

There are still those who advocate a legislative-heavy parliamentary system, on the grounds that this is the only system enable true democracy through governance by representatives elected directly by the people.  But while a parliamentary system may be closer to “pure” democracy, leading political figures and constitutional scholars also recognize that this model comes with a great deal of uncertainty and potential volatility that could destabilize Egypt’s already unsteady transition.  Raafat Fouda, a constitutional law professor at Cairo University, has pointed out that a semi-parliamentary or mixed system would be more likely to create the political balance that Egypt needs: "In the semi-presidential system also knows as the mixed system, either the president has more authorities than the parliament or the other way around, yet neither can have absolute authority, as a practical application for the balance of power,” he said.

Some critics of the current mixed political system are wary of preserving it because they associate it with the authoritarianism of Mubarak’s regime. However, the system outlined in all of Egypt’s previous constitutions and implemented by Mubarak may have been “mixed” in name, but it was never properly implemented. Mubarak interpreted the system to justify his centralization of power in the executive branch, surrounded by ruling party loyalists who zealously fulfilled his authoritarian directives. While the executive branch maintained a monopoly on power, Mubarak’s parliament was a mere puppet of the ruling National Democratic Party (NDP), which held an overwhelming 95 percent of the seats. A parliament staffed almost entirely by Mubarak loyalists could never serve as a counterweight to the executive. And the regime was determined to prevent opposition forces from gaining representation in parliament, by employing riot police, armed thugs, and ballot-rigging to manipulate election results.
Despite the blatant election fraud observed under Mubarak, the judiciary proved incapable of confronting the regime’s political corruption. Frustration and outrage with this fundamentally unjust and unrepresentative political system was one of the fundamental catalysts for the revolution, and from the start revolutionaries demand a structural overhaul of the existing model of governance. The revolution was about much more than simply reshuffling the cabinet or new leadership; it was about transforming the broader authoritarian system into a more accountable and democratic government.
One of the few major political forces still advocating a pure parliamentary system is the Salafi Nour Party, which holds nearly 25 percent of the seats in the legislature. Mohamed Nour, a spokesman for the Salafi Nour Party recently outlined the party’s stance: “The FJP is pro mixed presidential and parliamentary system, while we prefer an absolute parliamentary system.  Although the Brotherhood clearly has a vested interest in maximizing the power of a parliament in which it holds a majority, the FJP has recently expressed a willingness to share power with the executive branch, perhaps to avoid holding sole responsibility for governing a transition that will inevitable be long and challenging. Essam El-Erian, Vice Chairman of the FJP, said “The parliament should have the same power as the elected president.” The Brotherhood’s reluctance to monopolize power is also reflected in its refusal to nominate a member of the group or its FJP party for the presidency.
The Islamist presidential candidate Abdel Moneim Aboul Fotouh, who defected from the Muslim Brotherhood after the revolution, also favors a mixed system to curb executive power and prevent the emergence of a new dictatorship .Surprisingly, leftist political forces are aligning with the Islamists on their preferred political system. Hamdeen Sabahhi, a leading Nasserist and presidential candidate, also advocates a mixed parliamentary-presidential system to avoid the resurrection of a tyrannical executive branch dominating a powerless parliament.
A mixed political system has clear advantages over a presidential or parliamentary model in light of Egypt’s unique demographic and development challenges. Parliamentary systems in emerging democracies – where a large number of inexperienced and ideologically diverse parties may have difficulty forming coalitions – may impede efficient decision-making and postpone the implementation of social and economic policies that Egypt badly needs.  As long as Egypt is still a developing country facing serious challenges in the areas of education, healthcare, infrastructure, and unemployment, a system that balances power between the executive and legislative branches will be more conducive to sound policy-making.  Such a system will allow Egypt’s next president to pursue a long-term strategic vision, while ensuring that his powers are checked by a vigilant legislature.
Khaled Saad is an Egyptian legal consultant at the American Bar Association-Rule of Law Initiative in Egypt. His work focuses on legal education and moot court programs as well as establishing the first legal clinic in Cairo. He majored in law at Ain Shams University in Cairo, and holds a masters degree in International Business Law from Indiana University.
Photo Credit: Calgary Herald