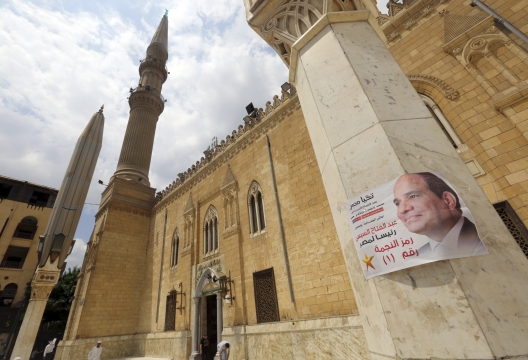 Photo: An election poster of Egypt's former army chief Abdel Fattah al-Sisi is seen on a column at Al-Hussein mosque in the old Islamic area of Cairo May 8, 2014. (Reuters/Amr Abdallah Dalsh)

During Egypt’s 2011 referendum on the constitutional amendments, the 2011 parliamentary elections, the 2012 presidential elections, and the 2012 constitutional referendum, ‘liberal,’ ’democratic,’ and ‘civil’ parties criticized the Muslim Brotherhood (and its Freedom and Justice Party) and Salafists for bringing religion into politics. Almost a year after the ouster of the Muslim Brotherhood president, Mohamed Morsi, these criticisms have abated despite the fact that religion continues to be used as a political tool.

During the past three years, liberal parties have denounced the way in which the Brotherhood and the Salafists distorted people’s political awareness with the use of religious language, symbols, and spaces (including places of worship), by labeling certain choices as religiously “correct.” This was used as a means to encourage their constituents to vote “yes” in the constitutional referendums or in favor of the religious right-wing candidates in the parliamentary and presidential elections.

These liberal political parties and movements demanded the establishment of constitutional and legal standards to prevent the merging of religion and politics and the elimination of the use of religion for political and electoral purposes. They also called for prohibiting the use of religious institutions and places of worship in electoral campaigns and to prevent the Muslim Brotherhood and Salafists from promoting their programs and attracting popular support by resorting to dualisms of ‘right versus wrong’ or ‘the religiously permissible versus the forbidden.’

All of this was important and necessary in order to free religion from being exploited in politics and to prevent politics and electoral competition from becoming about religion.

Today, however, these same liberal political parties and movements were silent about the organized manner in which religion was embroiled in Egypt’s presidential elections.  A number of religious leaders – both Islamic and Coptic Christian – came out publicly with statements in support of the candidacy of the former defense minister and officially announced their backing for him in the presidential elections.  Some have even gone so far as to project religious meaning onto the aura of the “saving hero” which surrounds this candidate.  The official religious institutions, both Islamic and Christian, were employed to justify the current policies and practices of the authorities and to promulgate the authoritarian tradeoff which places bread, security, and stability ahead of freedom and democracy.  All of this has not evoked even brief mention or cursory warnings about the danger of implicating religion in the elections process from the political parties and movements which hold up the banners of liberalism, democracy, and civilian rule.

Today, these same political parties and movements are silent about President Abdel Fattah al-Sisi’s repeated references, during his electoral campaign, to his religious observance and personal religiosity and the idea of “guardianship,” or the role that the president should play in protecting religion, morality, and customs.  Nor do these groups view this as a reason for sounding the alarm about the possibility of religion being imposed on the public sphere and political life, or about the potentially dangerous repercussions for rights, freedoms, and equality between all citizens.

There are some who are consistent in their defense of the need to liberate religion from exploitation for political and electoral purposes, whose refusal to be silent today is as strong as it was in the past, and who do not distinguish between the use of religion for political purposes by parties and movements such as the Muslim Brotherhood and the Salafists and the similar use of religion by the official religious institutions or by the “state’s candidate.” Yet today, those who speak out on this issue are told, in the best cases, it would be better to keep silent, and in other cases (to no avail), are accused of being members of a dormant cell of the Muslim Brotherhood, and an enemy of the civilian state.