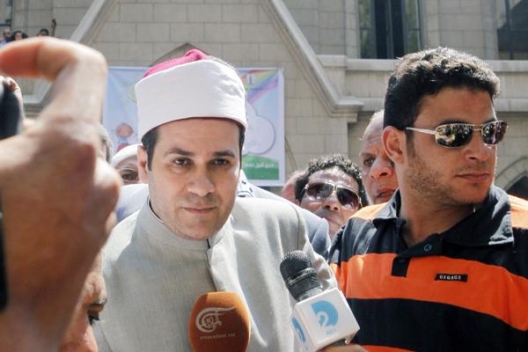 On October 29, dozens of public figures, political parties, and non-governmental organizations launched ‘The National Front to Protect the Constitution,’ which aims to combat efforts to amend the nascent constitution. The parties involved include the Popular Socialist Alliance, Dostour, Popular Trend, Karama, Adl, the Egyptian Social Democratic Party, as well as independent figures including Waheed Abdel-Meguid, Ahmed al-Boraei, and Hazem Hosni. A few weeks earlier, Mazhar Shahin, a preacher at the famous Omar Makram Mosque off of Tahrir Square, who has since become a talk show presenter on the private channel Sada El-Balad, had launched ‘The Popular Campaign to Amend the Constitution.’ Ahmed al-Fadali, who is a part of Shahin’s movement, also heads the Independence Current. The coalition is competing in the parliamentary elections, and Fadali’s own platform included a call to amend the constitution.

Both Fadali and Shahin are known hardline supporters of Sisi. They claim that the 2014 constitution, which was approved by 98 percent of Egyptians who participated in the referendum, restrains the president’s powers. They view the powers the constitution grants the parliament—approving the president’s choice for prime minister and the power to impeach the president—as more “dangerous.”

Shahin, once known as the orator of the January 25 revolution against former President Hosni Mubarak, insists that his intention is not to rewrite the constitution, but rather to “amend six articles that limit the powers of the president and make him unable to carry out his mission in fighting terrorism and improving the economy.” Included in these articles is the limitation of the president to two four-year terms in office, which Shahin says should be each be extended to six years.

Following his September 13 statement, Sisi personally denied that any changes to the constitution were imminent and asked the media “not to read too much” into his statements. Figures known for supporting Sisi, such as Sameh Seif al-Yazal, the leader of the parliamentary coalition frontrunner For the Love of Egypt, however continue to state they would consider amending the constitution. Seif al-Yazal admittedly has said this will not necessarily take place immediately after the newly elected parliament convenes. “This could happen in one or two years,” Seif al-Yazal said, reiterating his belief that the constitution places undue restrictions on presidential powers.

Pro-democracy political parties and activists that are taking part in the counter campaign aimed at protecting the constitution fear that those in favor of amendments, such as Seif al-Yazal, Shahin, and Fadali, are covering up a hidden agenda whose goal is to reduce parliamentary powers, expand the terms of the presidency, and curtail freedoms and rights guaranteed by the constitution. “The world has never known in its modern history a constitution that was drafted by certain people, only to see some of those same people later taking part in a campaign to distort it,” said Waheed Abdel-Meguid, an expert at the Al-Ahram Center for Political and Strategic Studies who is coordinating the National Front to Protect the Constitution. He told EgyptSource that some who celebrated following the approval of the constitutional referendum in January 2014 “are now on the front lines, demanding its amendment.”

However, the context in which those celebrations occurred has changed dramatically. At that time, the referendum was the new regime’s first chance to demonstrate to both domestic and international audiences that it enjoyed widespread popularity following the army’s removal of former President Mohamed Morsi. High turnout and an overwhelming rate of approval were viewed by the new regime as necessary in order to cement its credibility.

Abdel-Meguid explains that suggestions to amend the constitution first emerged after questions were raised regarding how the parliament would deal with the hundreds of laws issued by Sisi, given that Article 156 states the parliament must approve all laws issued during its absence within fifteen days of convening. During his first seventeen months in office, in the absence of an elected parliament, Sisi issued more than 300 laws, decrees, and amendments. According to prominent lawyer and legal expert Shawki al-Sayed, this surpasses the number of laws issued by Mubarak’s parliament between 2005 and 2010. However, Abdel-Meguid says this “should not be a major issue,” explaining that the laws “could be divided among several committees and voted on by members within a week or two.” The laws could also be approved and then amended later, Abdel-Meguid added.

George Ishak, a prominent leader of the January 25 revolution and the Kefaya Movement, told EgyptSource he was “astonished” by the campaign to amend the constitution and claims that it limits the powers of the president. “All such scenarios about impeaching the president are very theoretical and have no relation to the reality we’re experiencing now,” Ishak said. “President Sisi enjoys wide popularity, and nearly all those who decided to run for parliament have declared in advance they wanted to back Sisi’s plans. So, where are those fears coming from, and how can [we] imagine a situation whereby two-thirds of parliament members want to impeach the president?”

A Campaign against January 25

Nour Farahat, prominent lawyer and law professor at Mansoura University, told EgyptSource the real aim of the campaign to amend the constitution is to “end, once and for, all any traces of the January 25 revolution against Mubarak.”

While the protests on June 30, 2013 that led to Morsi’s removal brought together secular parties and different groups that opposed the Muslim Brotherhood, divisions among them quickly emerged following Morsi’s ouster. Mubarak’s supporters interpreted June 30 as an uprising not just against the Brotherhood, but against all those who took part in the January 25 revolution. Hardline supporters of his regime repeatedly point out that several members of the fifty person committee that drafted the 2014 constitution were strong supporters of the January 25 revolution. Azmy Megahed, a member of Shahin’s campaign, claims that some of those who drafted the constitution “stood against the Supreme Council of the Armed Forces [that took power after Mubarak’s removal], shouting slogans against the army. We should not have allowed such people to write our constitution.”

Farahat said that Mubarak supporters were “very angry” that the preamble of the 2014 constitution praised the January 25 revolution and considered it a basis of legitimacy for the new regime, along with the June 30 revolt against Morsi.

Former minister and member of the National Front to Protect the Constitution Ahmed al-Boraie believes those calling for amendments to the constitution are opposed to the basic rights and freedoms that the constitution guarantees, including freedom of expression, freedom of assembly, freedom of association, and women’s rights. “We have been suffering from many laws issued over the past two years that disregard the rights stated in the 2014 constitution,” Boraie says, listing the Protest Law, the anti-terrorism law, and a law that expands the jurisdiction of military courts. “Now those supporting amending the constitution don’t even want to see those rights written on paper.”