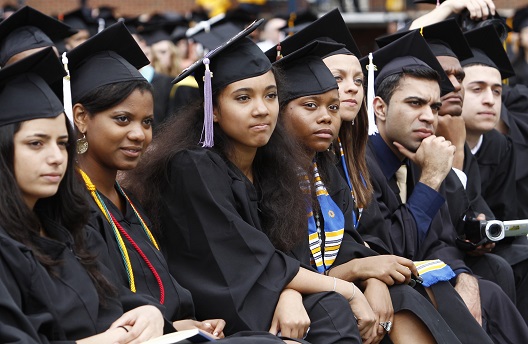 Fewer students from the Middle East and North Africa (MENA) are pursuing university studies in the United States. In its most recent “Open Doors” report, the Institute for International Education measured an 8.7 percent reduction in the number of undergraduates from the region attending US colleges and universities for full-time studies and 5.2 percent decline in graduate students. Why are more and more students and their families rejecting the United States for higher education?

Those countries with fewer students in the US between the 2016/17 and 2017/18 school years were Bahrain, Iraq, Israel, Egypt, Saudi Arabia, Morocco, Libya, Qatar, Syria, the United Arab Emirates, and Yemen. Similarly, data from the International Graduate Admissions Survey showed a 14 percent drop in graduate applications by MENA students in the fall of 2018.

In addition to its annual comprehensive Open Doors survey and report that covers a couple of thousand US institutions, the Institute for International Education, in partnership with other higher education associations, also conducts a smaller snapshot survey of 500 colleges and universities in the United States annually. In 2018, officials at these institutions attributed the declines in full-time enrollment to a variety of factors. Those most frequently cited were difficulty with visas, negative perceptions of the social and political environment in the US, and students choosing to enroll in other countries instead of the United States due to increased competition.

While their impacts have not been measured precisely, there is no doubt that the Muslim travel ban and anti-Islam rhetoric coming from American leaders and media sources have contributed to this decline in the number of students from the MENA region who decide to select the United States for their studies.

We conducted a small survey of nine students from the MENA region to complement the aggregate data. In the past, the US might have been their first choice. However, now with the development of higher education throughout the MENA region, more students are choosing to stay closer to home given that their chosen fields of study are available.

One student stated, “The reason why I chose to study at home is because my major (law) is available in Saudi universities now, and all my financial responsibilities are taken care of.” What this means is for most Saudi students their public education fees are minimal because it is highly subsidized by the government, including higher education. The exception applies to some private universities but even those have a much lower tuition compared to the United States. Additionally, in some cases the government also assists with merit-based scholarships.

The high cost of US tuition and living expenses is a major factor. Not all MENA students are on government-sponsored scholarships, and many felt that the direct and indirect costs of a US education did not measure up when compared to the MENA region. Additionally, several students and families fear the complications associated with traveling to and from the US. A common concern is regarding US visas. It is often a complicated process and there is always a risk of being denied re-entry after a trip.

At a time when rapid economic development is perhaps the most important objective of all the countries of the Middle East, there is good reason to expose students to higher education that is among the best in the world. In addition to a wide variety and depth of fields of study, US universities offer skill development and career services that MENA universities are only beginning to develop.

Most US universities offer programs to advise students on opportunities for their career paths. Services include building resumes and mock interviews. This assistance prepares students more and gives them a better sense of direction in developing and working on skills needed. It makes them more employable which will benefit the MENA region greatly given that unemployment rates are high across the region.

US universities also offer a more diverse community in which students from all parts of the world interact with each other daily. This makes students more aware and tolerant of other cultures and religions. Ideally, these students would take their lessons in tolerance with them when travelling back to their MENA homelands and they would contribute to bridging the gap between different ethnic and religious groups across the region. These lessons in tolerance could eventually contribute to a more peaceful and harmonious society in the Middle East.

But how does the United States benefit from Middle Eastern students? US universities and colleges value the large number of MENA students who arrive in the United States on government-sponsored scholarships, paying international student tuition rates, with the Saudis at the top of the list. In addition to the measurable economic benefits, students from the MENA region contribute to increased diversity on college campuses, and, whether they intend to or not, become ambassadors for their countries, cultures, and faiths.

However, the broader benefits to the United States are likely more important, if less measurable, than the direct economic impact and increased diversity. The MENA region has for decades been problematic for US foreign policy. The challenges of the region both fascinate and repel the American public. For decades, US politicians and policy makers have vowed to steer clear of “quagmires” in the Middle East only to find themselves intimately involved in conflicts, peacemaking, and development. The results have been decidedly mixed. Similarly, US businesses want to be in the Middle East, despite the region’s reputation as both a difficult market to crack and risky to operate in.

As much as some Americans may wish to turn away from this troubled area, US interests in the MENA region are not going away. Welcoming students from the region into the United States for an extended period of time should be seen as part of a diplomatic strategy of understanding the people of the region and assisting them as they bring about positive change to their respective societies. This is a long-term endeavor and there will be ups and downs along the way. The Arab Spring provided a good example of the West getting carried away by its own euphoria and failing to recognize the power of authoritarianism to sustain and even reinvent itself.

Over time, the United States needs to build its capital with the people of the Middle East. That can be done in many ways, but the experience of studying and living over an extended period of time in the United States changes the way young people see themselves and their potential to influence their communities and countries. It also permits them the opportunity to experience firsthand the texture and diversity of American life, thus providing some context as they consider US actions and policies in their region. This people-to-people factor is an essential element of a clear-eyed strategy for genuine and positive change that will benefit both the United States and the Middle East.

There is no single solution to getting more full-time undergraduate and graduate students from the Middle East to attend US colleges and universities. The current administration professes to be enthusiastic about foreign students and could do more to welcome them.

Assistant Secretary of State for Educational and Cultural Affairs Marie Royce stated, “international students studying alongside Americans are a tremendous asset to the United States.” Senior officials like Royce who see the value of foreign students should also be spending more time in the Middle East and North Africa, better explaining the visa process, the educational advisory services, meeting with alumni groups, and encouraging ambassadors to prioritize increasing the number of full-time international MENA students coming to the United States.

Although there are some limited scholarship programs, the numbers are small for full-time study in the US. With a very small investment, the US could send a signal by developing a more ambitious program of merit-based scholarships for MENA students. The goal could be to make such a scholarship program as recognizable and respectable as the Fulbright Scholar Program.

US universities and colleges also need to do a better job of employing their MENA alumni as recruiters. They need to spend more time in the region talking to prospective students and their parents. And they need to continue to be vocal about the disruption that can be caused by swings in visa policies.

Sarah Aljishi was a research intern at the Atlantic Council’s Rafik Hariri Center and a current student at George Washington University.