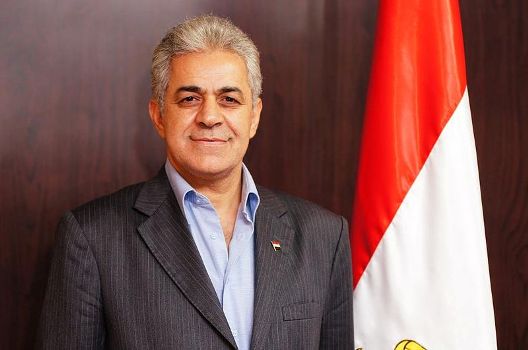 Hamdeen Sabbahi is the only other candidate to stand against Gen. Abdel Fattah al-Sisi in Egypt's 2014 presidential elections. (Photo: Wikimedia)

Days before the official campaigning period for new presidential elections in Egypt is scheduled to end, the main headline of the semi-official daily, Al-Ahram, quoted presidential candidate Hamdeen Sabbahi, 60, as saying he would accept the job of prime minister in the event he lost the race against his powerful rival, former Defense Minister Abdel-Fattah al-Sisi.

Sabbahi’s campaign was furious, and he personally denied the report, saying it was part of a smear campaign which has claimed he is seeking any top job in government.

One of only two presidential candidates in the 2014 presidential elections, and a well-known opponent of former president Hosni Mubarak, Sabbahi surprised observers when he came in third in the most diverse presidential elections Egypt witnessed in May 2012. He received nearly 5 million votes, coming in third, behind former President and Muslim Brotherhood leader, Mohamed Morsi, and Mubarak’s last prime minister, Ahmed Shafik.

While his ambition seemed justified in 2012, taking part in an open competition amongst candidates representing various political backgrounds, many have questioned his decision to run in the 2014 elections. This reaction has been spurred mainly by two points of concern.

First is the perception that all state institutions have been orchestrating a campaign to convince Egyptians that his opponent, Sisi, is the only viable candidate to fill the position. Second is the belief that Sabbahi’s presidential bid has legitimized the return of military rule, and is in conflict with the goals of the 25 January Revolution.

Sabbahi’s campaign team itself insists that his decision came largely as a result of pressure from his young supporters who took part in the 25 January Revolution. They called on him to run so that they would have a candidate representing their ambitions to build a modern, democratic state. However, it is more likely a mix of the personal ambitions of a charismatic politician, together with a strong belief in the principles he has fought for during the past 40 years that has motivated Sabbahi.

Responding to the second point of criticism, Sabbahi has said the Egyptian people will provide the real legitimacy for their next president. He added he personally would have preferred it if Sisi had not run, remaining instead as Egypt’s defense minister.

After the Supreme Council of the Armed Forces declared it was backing demands to remove Morsi and the Muslim Brotherhood from power on 3 July, following widespread mass demonstrations, Sisi himself announced he had no ambition to run for president. He said that he sought only to protect the country from a civil and religious war. However, the former defense minister later announced his presidential bid, saying he had no choice but to bow to the public pressure.

As a strong supporter for the removal of the Brotherhood and Morsi from power, in coordination with the army, it was also difficult for Sabbahi to deny his rival the right to run for president, or the widespread support Sisi enjoys among many Egyptians. “My bet is on the majority of young Egyptians who want to see a truly democratic regime that fights corruption, old interests, and seeks to build a modern state that makes use of their skills,” Sabbahi said in one of his many interviews. “This is the camp I depend on to compensate for the popularity my rival enjoys among many Egyptians,” he added.

Unlike Sisi, who limited his campaigning to television interviews and connecting with supporters via video conference calls due to assassination threats from Islamist opponents, Sabbahi sought to confirm his image as a “man of the people.” He toured more than a dozen Egyptian cities, mingling with citizens from all walks of life, as well as with the young Egyptians with whom he identifies and defends. That’s why he picked “One of Us,” as the slogan for his presidential campaigns, both in 2012 and 2014.

Sabbahi, whose role model has long been the late President Gamal Abdel Nasser, has been a political activist since his days as a university student in the mid 1970s. His activism landed him in prison seventeen times both under former president Anwar Sadat and Mubarak. Between 2000 and 2010 he managed to win a seat in parliament despite attempts by Mubarak’s Interior Ministry to rig the vote, and their bloody clashes with his supporters. After losing presidential elections in 2012, and the deep split that developed between the Brotherhood and secular opposition groups over the drafting of the 2012 Constitution, and their attempts to impose their strict Islamist ideology, Sabbahi joined Nobel Peace Prize winner Mohamed ElBaradie and other opposition leaders in forming the National Salvation Front. Then, Islamist critics also claimed that Sabbahi only cared about the presidential seat, and was attempting to compensate for his loss a few months earlier.

Sabbahi has, however, also recently come under fire for various reasons. His critics point out that while he has fought on behalf of the poor, both as a student leader and later as a member of parliament, he has no experience in his own field as a journalist, nor has he occupied any administrative jobs that could inspire confidence in his abilities as a president. In his own defense, Sabbahi has pointed to his record in parliament. He was known for leveling tough questions at top ministers, among them those known for close ties to Mubarak. He succeeded in revealing government corruption, particularly in the sale of public sector companies to the private sector, and fought laws that would clearly harm Egypt’s poor. A man of the street, he was always at the front lines of protests against Israel’s occupation of Palestine, or US intervention in the Arab world.

“We know we’re in a tough battle,” said former Ambassador Maasoum Marzouk, and one of Sabbahi’s main backers. “But Sabbahi couldn’t fail thousands of young men who came to him, saying ‘You are one of us,’ you were in Tahrir Square with us on 25 January, and our voice must be heard through you. That was the main reason that made Sabbahi took the decision to run for president.”

Hossam Mones, one of the prominent 25 January Revolution youth activists who heads his campaign team, said Sabbahi was aware of the negative consequences he would suffer in the event of a heavy loss, “But we appealed to the fighter inside him, and he could not turn us down.” Responding to Al-Ahram’s report on Sabbahi’s readiness to accept the job of prime minister if he lost to Sisi, Mones echoed Sabbahi’s denial, saying it was part of the propaganda campaign against his candidate. “Sabbahi has repeatedly said he would never accept any government position, except if he was directly elected by the people.”