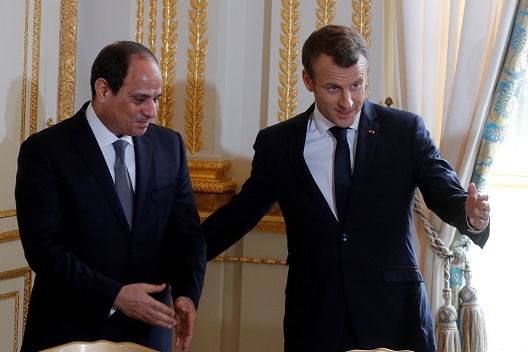 Eight years ago today, a small group of Egyptians protested against their government. The protest grew, and led to millions of Egyptians coming to the streets across their country, eventually resulting in Hosni Mubarak resigning the presidency. His rule of three decades came to an end, but the revolutionary uprising was eventually subject to a counter-revolutionary wave. The final result of Egypt’s uprising cannot yet be measured, just as any uprising is eventually judged in decades, not years—but it is clear that the international community has moved beyond treating Egypt as a country in the throes of a democratic transition. The question is—how does engagement now compare to the revolutionary period?

The exuberance from much of the western policy community for the Arab uprisings has passed. When Mubarak was forced out of power, Western governments were faced with two realities. The first is that they realized their assessment of the durability of Mubarak’s political dispensation was obviously flawed; no analyst, in or out of government, seems to have predicted the uprising. The second was that for the first time, they were faced with a state in Egypt that was in substantial flux—and they had to learn to react accordingly.

Currently, Cairo is viewed as stable and unlikely to falter in comparison to the  wider neighborhood. The overriding concern for Western government is stability. Against the background of the Syrian civil war, the Libyan aftermath of its own uprising, the Yemen catastrophe, and other such crises; Cairo is viewed as far more stable than various others in the region.

Eight years on, policy makers in most western capitals tend to see Egypt via four predominant filters. The first is that there are virtually no policy makers that do not privately, and often publicly, express concerns about Egypt’s human rights record. Various international and Egyptian human rights organizations appear unanimous in their appraisals of Egypt’s situation in this regard. Different governments will tend to note these reports as having validity, not least due to domestic constituencies’ concerns about them—but other factors are viewed as more vital in terms of relations with Cairo.

The second filter is one that emphasizes the threat of extremist Islamist terrorism—the Islamic State (ISIS) in particular,  as well as other militant groups which threaten stability within the region, and Western interests at home and overseas. Cairo has successfully situated itself as a standard bearer opposing such extremist Islamism, and thus has gained a privileged space in the international arena. That has led to western governments to continue with much military support and wider trade relations.

There continue to be, nevertheless, widespread disagreements between what Cairo considers to be terrorist groups, and what most western capitals, including Washington, view as terrorism—particularly when it comes to the Muslim Brotherhood in the country. The Trump administration has toyed with the idea of proscribing the group internationally but has shrunk back from the effort. That is due to a near consensus in the Beltway’s analytical arena that while the Brotherhood is problematic for various reasons, including sectarianism and incitement, it does not meet the threshold required to be proscribed. Most western governments appear to share that same assessment—even the UK’s own right-wing led government, which carried out a review of the Muslim Brotherhood, has been unwilling to proscribe the group. The disagreement with Cairo in this regard, nevertheless, has not led to a breakdown of relations.

The third filter relates particular to European countries and their fear that any future instability in Egypt could lead to more refugees crossing into Europe. In private conversations, various European officials confirm that different Egyptian diplomats have raised this issue with much success. There is little appetite for European capitals to counter Cairo’s argument that it requires European support  to avoid any instability that might see more Arabs crossing the Mediterranean. Indeed, Cairo has seen its ‘credit rating’ within Europe increase as it is viewed as holding back refugees: either those crossing through Egypt, or Egyptians themselves.

The fourth filter is the new situation that Western governments find themselves within at home. Concern about ISIS, other extremist Islamist movements, and the specter of more refugees would probably be sufficient to cause pause. But the rise of the populist right in the United States, Latin America, and the European continent occupies   significant attention in different Western capitals. This is most pronounced in the UK with Brexit concerns taking up a load of proverbial ‘bandwidth’—but distraction due to domestic concerns is a common theme globally.

Eight years on, Egypt exists in a very different neighborhood, with the emergence of new poles of power. The Turkish-Qatari axis versus the Saudi-Emirati-Egyptian bloc, deep tensions between much of the GCC and Iran, and concerns about the direction of an adventurist Saudi Arabia; all of these factors take up a lot of attention from within Western political establishments. There is an argument that Cairo’s stability is not a foregone conclusion, and that a comprehensive stability would necessitate widespread reforms. It is an argument that, however, does not find much of an audience in the West—until, or if, a crisis becomes evident.

Dr  H. A. Hellyer is a non-resident senior fellow at the Rafik Hariri Center for the Middle East at the Atlantic Council. A senior associate fellow at the Royal United Services Institute in the UK, he is the author of “A Revolution Undone: Egypt’s Road Beyond Revolt”, “Muslims of Europe: the ‘Other’ Europeans”, and “The Islamic Tradition and the Human Rights Discourse”. A visiting professor at the UTM Centre for the Advanced Study of Islam, Science and Civilization in Malaysia, he previously led the Rafik Hariri Centre’s Religion and Human Rights project at the Atlantic Council, which examined the engagement between Islam and the human rights discourse, supported by the Carnegie Corporation in New York.