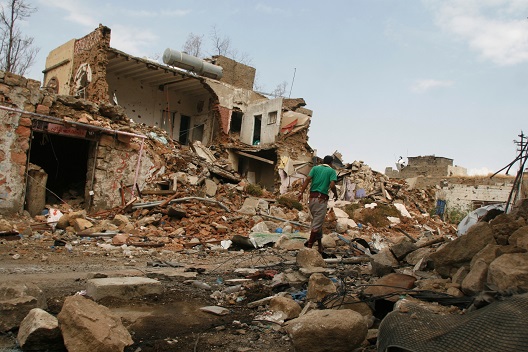 Taiz is the site of the longest-running battle ground in the Yemen war, which began when Houthi forces took over the city on March 25, 2015. Initially, the Houthis were confronted by peaceful demonstrations which they repressed heavily, killing six demonstrators in the process. The situation rapidly developed into armed conflict when the war erupted after the Houthis invaded the south, prompting the Saudi-led coalition to launch a counteroffensive on March 26, 2015. Taiz is centrally located in Yemen, and is the country’s third most populous city. Although large parts of Taiz were reportedly liberated from Houthi dominance, the “Taiz liberation operation” was never launched with serious intent.

Taiz has been described as the heart of Yemen’s 2011 uprising against the former president Ali Abdullah Saleh. Before 2011, Taiz witnessed countless demonstrations against the Sanaa government, the largest occurring in December 1992. However, the continuous unrest and ongoing battle in Taiz received little international attention despite the disproportionately high human cost in comparison to other Yemeni governorates. Taiz has been besieged by Houthi-Saleh forces for 18 consecutive months, adding to the high civilian casualties incurred by shelling, infighting, and air strikes carried out by the Saudi-led coalition backing President Abdrabbo Mansour Hadi.

Historically, Taiz’s active opposition against the central government has been the product of resentment towards the city’s marginalization. Even though Taizis has taken part in different state institutions—sometimes even in crucial positions such as interior minister—they held no real power to influence political decisions. The military and tribal circles dominated by the northern tribal elite remain in control. Tribal connections and nepotism, rather than state institutions, constitute the backbone of power in Yemen.

Taiz’s exclusion is not the result of current policy, but rather is rooted in Yemen’s history. Under North Yemen’s monarchy, from 1918 to 1962, the ruling Imam’s army, officers, and governors all belonged to a branch of Shia Islam unique to Yemen known as the Zaydi. About half of the population, including Taizis, belonged to the Shafi’i Sunni school of thought, but were largely excluded from the power structure. A coup d’état unseated the monarchy in 1962 followed by an eight-year civil war that left the country split among the Royalists—aiming to restore the Zaydi monarchy—and the Republicans, a force made up of a mix of Zaydi and Shafi’i fighters.

Taizis fought on the side of the Republicans, which in turn split into two factions in August 1968. One faction was leftist—mostly from Taiz—and the other was nationalist and conservative, from Sanaa and the north. This split was both ideological and regional. The Taizis found themselves pitted against the northerners and Royalists. The conflict resulted in the dominance of the more conservative north wing, backed by the tribal belt around Sanaa, and the exclusion of the leftist Taizi wing.

While Taiz is not the only victim of political marginalization by the northern tribal elite, it has been the most politically active, for several reasons. First, during Yemen’s colonial period from 1839 to 1967, most of the labour force in Aden came from Taiz. Contact with Aden opened the city to the modern world, in contrast to the isolated status of the northern part of Yemen. This increased Taizis’ desire to earn a modern education and raised their aspirations to improve living conditions and change the political system. The exposure that Taizis enjoyed and the political awareness they gained as a result of their proximity and migration to Aden is a key factor in their increased consciousness of their subsequent marginalization.

Secondly, Taiz is known for its commercial activity, with many prominent Yemeni business families hailing from Taiz, such as Hail Saeed family. As a result, Taizis pay the most in taxes according to an official in the Yemen finance ministry who asked to remain anonymous. Although most businesses are based in Sanaa, many businessmen from Sanaa never pay taxes because of their tribal or political connections. Because Taizis do pay their taxes, they demand that the state provide services in return.

Given this context, it’s understandable that Taiz became a center of opposition and rebellion against both the central government and the Houthi-Saleh alliance. Its opposition became even more politicized against the Sanaa government during the Saleh period, from 1978 to 2012. As the Houthis, allied with Saleh and the northern militias, have tried to take control of Taiz by besieging and bombing it, Taiz residents have turned against them.

There may be two reasons why the Hadi government, backed by the Saudi-led coalition, is reluctant to liberate Taiz from the Houthis. First, the UAE is reluctant to support the liberation of Taiz because the Islah Party, Yemen’s Muslim Brotherhood represented by local anti-Houthi-Saleh leader Hamoud al-Mikhlafi, was the first to take up arms against the Houthis in the city. Despite the presence of other political and religious factions in Taiz’s resistance forces, the UAE fears that liberating the city might give the Muslim Brotherhood—a group it has listed as a terrorist organisation—a chance to seize power. Army brigade leader Adnan al-Hamadi declared his loyalty to the President Hadi, but did not receive any support from the Saudi-led coalition. Instead, the coalition is backing the Salafi militia of Abu al-Abbas to counter the Houthis and the Brotherhood at the same time. This reveals that the coalition prefers to support religious groups over official institutions, because these groups are more easily controlled.

Second, the Saudi-led coalition is not in a rush to end the battle in Taiz, because they have built a media campaign around the city highlighting Houthi-Saleh attacks and violations. This has become useful leverage for the Saudis and their allies, allowing them to encourage international pressure against the Houthis and Saleh, and diverting attention from the coalition’s own negative actions. The situation in Taiz also helps the Saudi-backed coalition discredit the Houthis locally, by claiming that the Houthis are not fighting for patriotic or nationalist reasons, but are instead fighting for their own interests at the expense of other Yemenis.

The coalition was eager to start the war in Taiz to exhaust the Houthi-Saleh forces, but it does not have any vision of how to end this battle. In the long-term, Taiz and the political dissatisfaction it represents will continue to upset any chance of stabilizing Yemen. The only way forward is for the warring parties to address the underlying reasons for the war: political marginalization, favoritism, and inattention to the people’s needs. Taiz is the longest-running and most heated battle in Yemen and there is no end in sight, since those in power are determined to thwart all attempts to end the war by military or political means.

Maysaa Shuja al Deen is a non resident fellow for Sana’a center for Strategic Studies and is a Yemeni researcher and political analyst based in Cairo. She has previously published in al-Monitor, As-Safir, and The New Arab.

Image: Photo: A man walks past a house destroyed during recent fighting between pro-government fighters and Houthi fighters in the southwestern city of Taiz, Yemen November 26, 2016. REUTERS/Anees Mahyoub