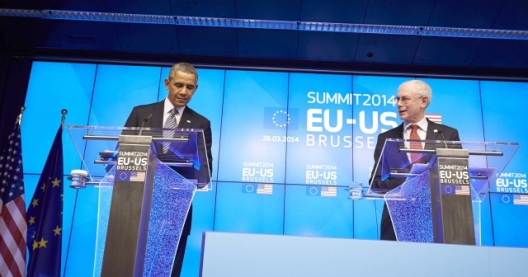 Communiqués issued at the conclusions of international conferences normally read poorly and break no new ground. In this sense, paragraph 22—Syria—of the EU-US Summit Joint Statement (March 26, 2014) does not disappoint. To the extent, however, that the words reflect the quality of the summit’s deliberations on the Syrian crisis, the joint statement does not bode well for 23 million Syrians or their neighbors. A sentence-by-sentence parsing makes the point quite clearly.

The Geneva negotiation process is crucial for achieving a genuine political transition in Syria. If this were true, then genuine political transition in Syria would be a dead letter. The Assad regime, with Russian support, made a mockery of the Geneva II proceedings, threatening the opposition delegation with prosecution for treason and moving against the property of its members inside Syria. If the process designed in June 2012 is to achieve its stated goal, then the regime’s calculation with respect to the efficacy of negotiated political transition will have to be changed.

The onus is on the Syrian regime to engage constructively with the process and take part in meaningful negotiations towards political transition as set out in the Geneva Communiqué. The Syrian regime, with foreign fighters supplied by Iran and advanced weaponry by Russia, is too busy prosecuting a war of terror on civilians and pursuing a military victory to feel any such onus. Surely the drafters of the joint statement have a passing acquaintance with the facts on the ground.

Any elections in Syria should only take place in within this [political transition] framework. If the Assad regime decides to accord its leader up to seven more years as president by means of a rump election in that part of the country secured for it by foreign fighters, the EU-US view will weigh not at all on its calculations. Indeed, it hardly matters whether or not the regime actually conducts a Potemkin poll. There are issues far greater to be addressed in Syria, beginning with the humanitarian abomination.

We will continue promoting efforts to alleviate the suffering of civilians; including the 6.5 million people displaced, more than half of them children, at risk of becoming a lost generation. Western taxpayers—with Americans in the lead—have generously donated to the alleviation of suffering. Government officials and NGO workers have worked with skill, dedication, and courage. But as long as the Assad regime’s practice of targeting residential areas with artillery, aircraft, rockets, missiles, and barrel bombs remains unchallenged and un-neutralized, the suffering of civilians will deepen and expand.

We commend Syria’s neighbors for hosting 2.5 million refugees and recall the need to maintain sufficient assistance. Commendation is good and assistance is better. Jordan and Lebanon are particularly vulnerable, and not only in economic terms. The assistance really needed by Syria’s neighbors involves dismantling the engine of human suffering and regional instability: the Assad regime.

We demand all parties, in particular the Syrian regime, allow unhindered delivery of humanitarian aid and medical care country-wide and across borders and including areas under siege, in full compliance with UN Security Council Resolution 2139. Although the concept may seem dated—twentieth century at best—verbal demands should be backed up with readiness to act and a sense of what to do. The absence of an “or else” clause may be either bad or good: bad if it means there is no “or else;” good if the drafters and their masters elected to eschew more empty verbiage.

We are concerned that there are delays in the transfer process of chemical weapons out of Syria, and we urge Syria to comply with its obligations under UN Security Council Resolution 2118 and the decisions of the OPCW Executive Council to verifiably eliminate its chemical weapons program in the shortest time possible. The concern is well-founded. Despite the well-established aversion in the West to any military step—no matter how modest—to mitigate the effects of the mass terror campaign being waged on civilians by the Assad regime, that regime can only feel 100 percent sure of its freedom to do as it wishes so long as the implementation of the chemical weapons agreement remains a work in progress. Of all of the unintended effects of US and Western policy toward Syria, this is by far the most catastrophic. Put bluntly, it would be better to relieve the regime now of its mass murder delivery and support systems and (if necessary) leave some chemicals in place than to permit it to run amok with non-chemical munitions as it leisurely packages chemical warfare materiel for eventual transport.

We will also continue, through the UN human rights bodies, to press for an end to and accountability for the grave human rights abuses and serious violations of international humanitarian law in Syria. The reports of the International Independent Commission of Inquiry to the United Nation’s Human Rights Council have been extraordinarily valuable in documenting the vicious illegality for which the senior civilian and military leaders of the Assad regime should stand trial. But “to press for an end” to these abuses “through the UN human rights bodies” is the emptiest of commitments. Those bodies have no power to compel the Syrian regime to cease and desist with barrel bombing, torture, sexual abuse, siege, and starvation. Indeed, to press for an end to mass murder in Syria requires the West to revisit the words “Never again,” look itself in the mirror, and act.

Not much should be expected from conference communiqués—their composition makes sausage-making pristine and paint drying exciting by comparison. But the gap between Western talk and action in the context of Syria has, for quite some time, inspired contempt in all the wrongs places: Damascus, Tehran, and Moscow. That gap was not narrowed by paragraph 22 of the EU-US Summit Joint Statement.