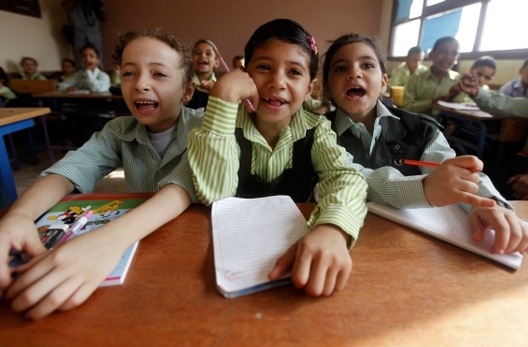 Education in Egypt has long been criticized, a fact recognized by the authors of the new constitution. Articles 19, 21, and 23 oblige the government to spend four percent of its gross national product on public education, two percent on higher education, and one percent on scientific research. These targets must be met, according to Article 228, by the school budget of 2016 and gradually increase thereafter until meeting international norms.

The constitutional referendum was approved on January 15, as high school students were readying to complete their exams before winter break. Their return to school was scheduled for February 9 but has now been postponed twice. The official reason is due to the 38 deaths from the H1N1 virus, though some suspect political instability plays a role. Regardless, students are now due to return on March 9, creating a near month-and-a-half long vacation. Elementary students, meanwhile, have been out of school since early January.

Constitutional solutions, if implemented, will take time to fix the system. But to see the extent to which Egyptian education is broken requires a first-hand profile. Ibrahim Awad is a 22-year-old resident of Helwan, though he prefers not to use his real name. He illustrates the degree to which a culture of education is lacking both in many schools and many citizens.

Ibrahim’s father, an irregularly employed private driver, scrapes together $600 US (EGP4200) per year to send him to a second rate private university. But even if he succeeds, Ibrahim doubts the degree will result in any noticeable improvement in his socio-economic outlook.

“I don’t know what I’ll do when I graduate,” said Ibrahim, who said his best expectation would be to work in a company making $60 (EGP400) dollars a month. A degree will raise his social prestige somewhat, and perhaps convince his girlfriend’s mother to allow him to marry her. “Maybe I’ll work as a driver like my father.”

At least Ibrahim is attending class, showing more initiative than earlier in his life. He failed his first year because he had no study habits whatsoever, skipping lectures like he did in high school.

“Once I had to repeat a year because I didn’t even know when the exam was, and I didn’t show up,” he said. “I’m not very smart, I never studied, I don’t know why. But now I’m frustrated because I’m in university and the courses are harder. I am getting older, I wasted years, and school is costly.”

Students in Egypt are assigned to government schools based on their grades. As his junior high performance was poor, Ibrahim was dumped into a vocational program. Technically, he studied plumbing.

“I would go to school, but do nothing. Students smoked in class, and the teacher wouldn’t even show up,” Ibrahim said. He was similarly truant, and no one held him accountable. “Teachers considered that we were failing students and not worth their effort.”

The only reason he graduated was the culture of bribing the teacher with Pepsi and cigarettes. More than eager to shuffle the students through, the teacher looked the other way when Ibrahim helped his illiterate colleague by writing answers on both their tests.

Ibrahim avoided smoking and narcotics due to his active lifestyle, being an avid ping pong player. He was given free membership and equipment in private sports clubs, but less fortunate friends just idled in the streets. As he grew older he watched many squander their lives away.

“Some friends go to cafés, but I don’t like the atmosphere there, just to sit and do nothing,” Ibrahim said. “There are also many places to get in trouble or do drugs and drink. People will do this in the alleyway near their homes. I have many friends like this.”

But his life may be similarly squandered. He would like to work while at university, both to pass the time and help with school fees.

“I ask my friends if they can find me work, but nothing comes of it,” said Ibrahim, who noted a Burger King employee makes $50 (EGP350) a month. “But I haven’t gone and applied anywhere. Maybe I should, but I don’t know how.”

For many young men in Egypt, employment is not really an option. According to the most recent figures from the governmental Central Agency for Public Mobilization and Statistics, 69 percent of the nation’s unemployed are youths. Ibrahim’s age group represents 39 percent of this figure.

These figures are largely due to the poor economy, but if Ibrahim and his friends are an indication, such unskilled, uneducated, and unmotivated labor does not help. The failings of the education system are obvious, but like many religious Egyptians, Ibrahim trudges through with an air of both resignation and hope.

“When I think about my situation this is about all I can hope for, though of course God has something more,” he said. “But if God wants me to do anything else, this will have to come from him.”

It is unlikely to come from anyone else, but perhaps the constitutional four percent can make a difference for his younger brother. If not, maybe for his future children, if his girlfriend’s mother relents.