The failed November 7 assassination attempt on Iraqi Prime Minister Mustafa al-Kadhimi in his Baghdad residence via an armed drone attack was a disturbing development in contemporary Iraq. Since the United States-led overthrow of Saddam Hussein’s authoritarian regime in 2003, Iraq has turned its back on fifty years of coup d’états and transfers of power through political assassinations.

With all its flaws and shortcomings, the new Iraqi political system has earned a good reputation for holding regular elections within generally-accepted international standards and maintained a steady tradition in the peaceful transfer of power. Therefore, this assassination attempt cuts deep into the core democratic principles that Baghdad has been struggling to establish and consolidate since 2003.

That said, the Iraqi government correctly recognized that the response to this assault on democracy shouldn’t involve unconstitutional and extra-judicial means, as this would essentially be aiding the perpetrators—whoever they might be—in accomplishing what they failed to impose by violence. The Iraqi government must avoid playing by the rules of anarchists and lawless armed groups. Instead, a thorough investigation must be conducted to identify the actual culprits and refer the case to the Iraqi judiciary.

The Iraqi government must also reassess its entire political process and security principles, including its intelligence capabilities. A failed major security breach, like November 7, must serve as an opportunity to learn and recalibrate all relevant state institutions. The Green Zone in Baghdad is often described as the most secure place in the country. It hosts important governmental compounds, residences of top Iraqi leaders, and many diplomatic missions and offices of international agencies. For such an attack to proceed without proper detection and interception is a cause for major alarm, and ignoring the incident would be an invitation to more lawlessness.

Making use of international support

The silver lining of the assassination attempt, other than its failing, of course, is that it revealed broad international support for Iraq through unanimous condemnation of the attack. Additionally, it also demonstrated a renewed commitment to stand with Baghdad as it moves forward to consolidate its democratic conditions, given that Iraq had just completed its fifth general elections on October 10 and received high praise for the quality of the electoral process.

This was proven by hundreds of statements and messages of support from Iraqi and international leaders and international organizations, including the United Nations Security Council (UNSC). The Iraqi government is highly encouraged to make use of this widespread support and do its part by enacting many critically-needed political, economic, and administrative reforms.

The US announced its full support of Iraq and a firm commitment to preserving its democratic transition. In unequivocal terms, the Joe Biden administration declared that any support Iraq may request to ensure its political stability will be provided in proper time. The administration also acted very responsibly by waiting for the Iraqi government to identify the perpetrators rather than preempting the Iraqi government’s investigation. Deferring to Prime Minister Kadhimi, the victim of the assassination attempt, affirms US trust in the Iraqi government and proper respect for its sovereignty.

The US conduct in this regard is a positive sign for bilateral relations and bodes well for a long-term partnership, especially as the two countries are moving to redeploy US combat forces from Iraq at the end of 2021, which changes the nature of their ties from the current military-centric mission to general cooperation in various economic, political, and cultural sectors.

The November 29 announcement from the investigative committee, which included representatives from all Iraqi security and intelligence agencies, didn’t reveal what everyone was waiting for—namely, the identity of the culprits. In fact, it seems that identification may have become more difficult with the revelation that the explosive team has removed evidence without doing proper forensic work, including collecting fingerprints. Another important revelation was that both the drones and munitions were identified as being assembled inside Iraq, dismissing any allegations of direct foreign involvement. However, this isn’t the end of the investigation, which is continuing until a final announcement is made—with or without a definitive identification of the perpetrators.

The most salient question is what the Iraqi government is planning to do if the culprits are identified. A significant part of the answer will depend on who these perpetrators are. If they are an opportunistic entity that took advantage of Baghdad’s foggy post-election political and security environment, the Iraqi government will have no reservations on any form of retaliation it can authorize, with or without external support. If a regional actor is linked to the attack, even if indirectly, this would complicate the calculations for Iraq. Considering its limited military ability and its unwillingness to engage in regional conflict, perhaps the best option for the Iraqi government would be the international law approach. Iraq can seek the help of the UNSC or other international entities, such as the International Court of Justice, to ensure that such violation of its sovereignty is addressed to prevent similar hostilities in the future.

If the drone attack was conducted by a militant group motivated by a disappointing parliamentary election outcome—with or without foreign alliances—the Iraqi government would face a more significant dilemma. The Iraqi government must decide whether it is ready to make its security forces fight among themselves and risk creating an opportunity for Islamic State of Iraq and al-Sham (ISIS) terrorists and other security threats to benefit from the fratricide. This isn’t a question of principles but a question of priorities. There is no dispute of the principle of keeping all arms under state control and eliminating their use for settling political scores.

However, the Iraqi government has been pragmatic on this front since these armed groups, collectively known as the Popular Mobilization Units (PMU), reconstituted their presence after the ISIS invasion of Mosul in 2014. This hard calculation prevented the last three Iraqi prime ministers from implementing the 2016 Popular Mobilization Law—which was supposed to completely restructure armed groups under the PMU into one force under the commander-in-chief of the Iraqi Armed Forces (in the same fashion all other Iraqi security forces have been organized)—thus, permanently putting this matter to rest.

Dealing with the root causes of Iraq’s security vulnerabilities

There is no magic solution to Iraq’s security vulnerabilities, such as the November 7 assassination attempt. All solutions must deal directly with the root causes of the problem. Reforming the Iraqi security forces is an essential first step. They must be professionalized, depoliticized, and given all the instrumentalities for success—from training and equipping to doctrine, discipline, and accountability at all levels. While this is an internal Iraqi task, the international community has a role in providing financial and capacity-building assistance. Iraq’s friends and allies must also end the linking of military capacity-building aid to the country’s political arrangements. Iraqi security forces must not be made part of the process of political consociation and quotas (muhassassa) that made some more loyal and responsive to certain political entities rather than to Iraq and the commander-in-chief.

The rule of law is another essential requirement. Several key political and social actors in Iraq enjoy unwarranted exceptions and immunities as they act outside the Iraqi constitution and law. These include leaders of political blocs from all ethno-sectarian factions, who maintain their own forces and militias, tribal leaders across Iraq, and even some religious figures. This conduct only allows an opportunity for others, such as unruly tribal elements and organized crime, to do the same as the country continues to fall into crisis.

Although some measures can be accomplished under the current constitutional framework, they aren’t sufficient to move Iraq’s democratization forward. For real democratic progress to take place, the Iraqi polity needs to embark on serious constitutional reform. Having been tested in the past fifteen years, essential parts of the current constitution, such as the parliamentary system itself, have proven beyond doubt that they aren’t suitable for Iraq’s deeply fractured society. Failure to reform the constitution and continuing to defer other reform priorities will ensure the transformation of Iraq from a fragile state to a failing one. 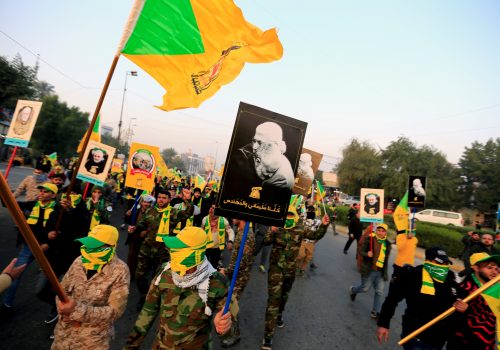 Can Kadhimi curb the influence of Iran-backed militias in Iraq?

Iraqi Prime Minister Mustafa al-Kadhimi needs to be more resolute about imposing non-military solutions to reduce the influence of rogue militias, a process he has already started. 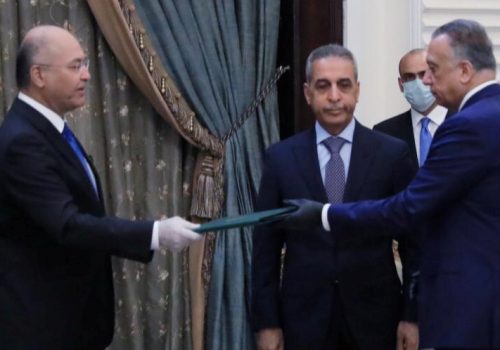 The protests that started in October 2019 ushered in a new political era in Iraq. For the first time in the post-2003 process of democratic transition, a government was forced to resign due to popular pressure. The resignation of Prime Minister Adil Abdul-Mahdi’s cabinet forced the Iraqi political leadership to face contentious constitutional and procedural […] 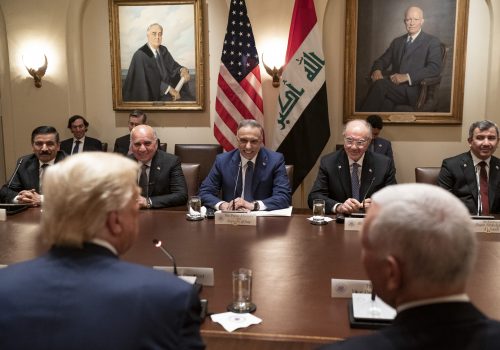 Washington must compete in the gray zone, for partial victory, with all the tools at its disposal. This visit was a good start.