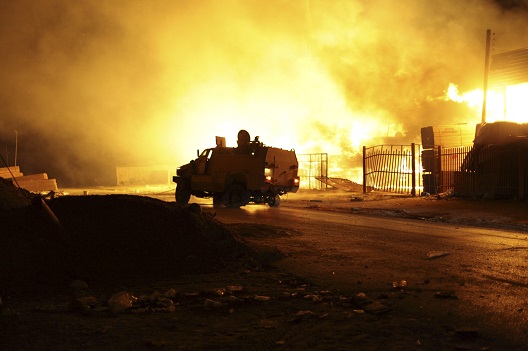 As Islamist militants and nationalist rivals battle for control of Libya, fears of a civil war loom larger. Between repeated armed clashes, competing governments, and volatile rhetoric, the need for a political process has gone from necessary to urgent. Some fear that recent hostilities could potentially drive a wedge through other groups that had previously resolved to engage politically. One such movement that could suffer such a split includes Libya’s federalists.

The federalist movement has shifted between violent and nonviolent phases since the day it announced its presence in Libya. On March 6, 2012 the Cyrenaica Transitional Council united thousands of tribal, military and political figures, who gathered in Benghazi and demanded the establishment of a federal governing structure in Libya based on the country’s 1951 constitution—a time when Libya was divided into three federal states Cyrenaica (East), Fezzan (South), and Tripolitania (West).

Federalists have since faced both political and physical attacks. The then-ruling National Transitional Council (NTC) and its chairman Mustafa Abduljalil accused the federalists of wanting to divide the country. On the streets of Benghazi, armed anti-federalism men fired on protesters at pro-federalism rallies on multiple occasions. In response, the federalists boycotted the political process in the country and unilaterally withdrew their recognition of the country’s central government. Nonetheless, the Cyrenaica Council did not resort to violence as it sought to realize its goals for a federal governing structure in Libya. The central Libyan authorities, however, failed to engage the federalists constructively or offer any guarantees for an inclusive political process. The trust deficit increased as Islamist factions—through undemocratic tactics and the use of militias—dominated and influenced the political process, forcing the passage of the controversial political isolation law under gunpoint.

A year had passed since the federalist movement established its presence when Ibrahim Jathran, the leader of the Petroleum Facilities Guards in the central region announced the formation of the Cyrenaica Political Bureau, followed shortly by the announcement of a regional government for Cyrenaica. Jathran rejected the Cyrenaica Council’s peaceful approach, deciding instead to blockade Libya’s main oil terminals and infrastructure and trying to sell oil illegally, independent of the central government in Tripoli. His actions drained the government’s coffers and sent oil prices soaring. Jathran’s actions prompted US Navy Seal intervention to prevent an illegal oil transaction and triggered a UN Security Council resolution against illegal buying and selling of Libyan oil. The international community sent clear message to the federalists: unilateral moves would not be tolerated. A few weeks after that the central government announced an agreement with the armed federalists to end the oil blockade.

The failure of the military option for the federalists encouraged the movement to shift tactics toward formal participation in the recent parliamentary elections. Federalists made significant gains, winning almost half of the sixty seats allocated for Cyrenaica (the eastern region of Libya), according to Essam al-Jehani, House of Representatives Member for Benghazi and a strong supporter of the federalist movement. These electoral factored into the federalists’ agreement with the central government to end the blockade of the oil terminals that has cost Libya around $30 billion.

The federalist movement rode the momentum of these political gains, inspiring Abu Baker Buera, one of the founding members of the federalist movement to run for presidency of the House of Representatives. Although he came second to Agilah Saleh in the race, his narrow defeat reinforced the notion that federalists could compete with other ideas through formal politics. Buera himself also opposed Jathran’s armed approach to political disputes, criticizing it as counterproductive and harmful to the federalist cause in Libya.

The recent conflict stems from Islamists’ and their Misratan allies’ reaction to their devastating defeat in the parliamentary elections, choosing to shun the political process in Libya. Aside from the impact on ordinary Libyans and the integrity of the state, there is a real danger that such a move could encourage more violence and empower the federalist armed faction led by Jathran, which continues to argue the validity of their armed option in the face of political uncertainty. If Jathran’s group follows through with its rhetoric, it would widen the trust gap between different political interests and increase the chances that they might resort to the use of force—culminating into a multifactional civil war.

With recent serious developments in Tripoli, the outlook appears that much more urgent. The Islamist-Misratan alliance in Tripoli now dominate the city after the House of Representatives ordered the Zintanis’ retreat. But the Islamists did not stop there. The resurrection of the infamous, discredited, and unpopular General National Congress and a new revolutionary government in Tripoli threatens a fundamental split in the country—a Libya with two parliaments and two governments. “What the GNC is doing now would fuel the movement towards federalism and even more extreme calls in the form of Libya’s partition,” said Buera. An extreme federalist sentiment could drive tribes and armed factions in Eastern Libya to demand an increase in influence and push for more power. Federalists within the House of Representatives, however, worry that power gained through force could tear the country apart. Adopting nationalist rhetoric, they have reached out to members from southern and western Libya to argue and clarify their position on key political issues.

The federalist movement has emerged as a hopeful example of a political group that could have chosen to follow a violent path, but instead had chosen to represent one of the pillars of a national agenda in post-revolution Libya. Essam al-Jehani, a leading proponent of federalism in Libya and currently a member of parliament for the city of Benghazi in Tobruk recently said that he would rather speak as a nationalist and parliamentarian representing a national agenda in Libya than to speak as a federalist. However, he spoke of the dangerous path down which Islamist groups are leading the country. “Being part of the nationalist camp and agenda in Libya today will reflect the accurate and correct image of the federalism movement in Libya,” said Essam al-Jehani. “An image that has been distorted by political Islam groups that currently seek to divide the country,” he added.

Moving ahead, the federalist movement in Libya will have to become more cohesive and better organized to play an effective role on the Libyan political scene. The current leaders of the federalist movement have different views on how the movement can best proceed with its agenda as a part of a wider nationalist agenda for all of Libya’s three regions. “If the federalist movement can change its current ineffective leadership, it will gain more popular support,” said Buera. To do so, its leaders will need to make a commitment to abide by the political process and encourage others to do the same. Failure could make federalism an irrelevant prospect in the context of a failed state.

Mohamed Eljarh is a nonresident fellow with the Atlantic Council’s Rafik Hariri Center for the Middle East focusing on Libya.

Image: A building on fire, which witnesses say was hit by a rocket, burns after clashes between rival militias in the Sarraj district in Tripoli August 23, 2014. REUTERS