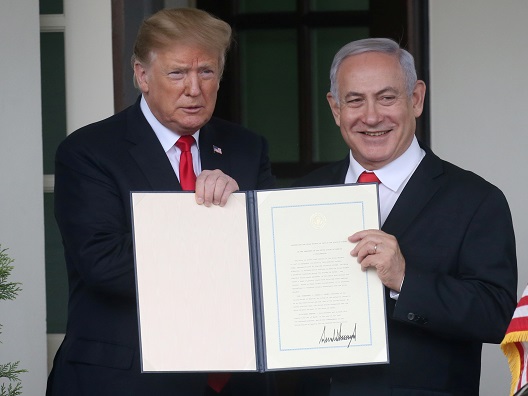 Recently the White House and the Department of State released statements: one proclaiming American recognition of Israel’s sovereignty over the Golan Heights; and the other commemorating the fortieth anniversary of the Israel-Egypt treaty of peace. Each, in its own way, revealed serious leadership dysfunction.

The substance of the Golan proclamation—signed by President Trump on March 25, 2019—reads as follows:

The State of Israel took control of the Golan Heights in 1967 to safeguard its security from external threats. Today, aggressive acts by Iran and terrorist groups, including Hizballah, in southern Syria continue to make the Golan Heights a potential launching ground for attacks on Israel. Any possible future peace agreement in the region must account for Israel’s need to protect itself from Syria and other regional threats. Based on these unique circumstances, it is therefore appropriate to recognize Israeli sovereignty over the Golan Heights.

The intent of the proclamation and the tweet preceding were to swing the forthcoming Israeli general election to the incumbent prime minister, Benjamin Netanyahu. President Donald Trump is entitled to have a favorite in that contest. Indeed, as president he is entitled to make the view of the United States concerning that election correspond to his own. Yet the instrument of recognizing Israeli sovereignty over the Golan is crudely inappropriate, and the proclamation is nonsensical.

Before the advent of this administration no one would have imagined the United States casually upending a pillar of American and international policy toward Arab-Israeli peace—UN Security Council Resolution 242—just to insert a thumb onto the scale of someone else’s election. No one would have imagined Washington deliberately and gratuitously isolating itself from friend and foe alike in the UN Security Council and around the world for such a base, relatively inconsequential purpose. And no one would have imagined the American president empowering Israel’s most dangerous enemies just to accommodate someone politically. But this is what has happened, and for no discernable purpose in terms of enhancing Israel’s ability to defend the high ground it occupies.

One passage in the proclamation is especially egregious: “Any possible future peace agreement in the region must account for Israel’s need to protect itself from Syria and other regional threats.” What would happen, therefore, if a post-Assad Syria—one featuring legitimate, inclusive governance—wants to become part of that regional peace? The essence of attempted Israeli-Syrian peace-making between 1993 and 2011 was land for peace and security. But what if the land aspect is, contrary to international law and common sense, preempted? Is the goal of decisive electoral interference in Israel worth the possibility of alienating the millions of Syrians who have opposed Assad and who have sought to free their country from Iran and Hezbollah? Is it worth closing the door forever on Israeli-Syrian peace?

On the day after the Golan proclamation, Secretary of State Michael Pompeo issued the following statement commemorating forty years of Israeli-Egyptian peace:

Today marks 40 years since Egyptian President Anwar Sadat and Israeli Prime Minister Menachem Begin met at the White House and took a courageous step in choosing peace. Following the Camp David Accords, the Egypt-Israel Peace Treaty laid the foundation for a new chapter in the Middle East. This crowning diplomatic achievement was the result of years of intense negotiations and remains a shining example of what can be achieved through honest dialogue, collaborative diplomacy, and moral courage. Not only did the treaty open the door to increased U.S. partnership with Egypt, it also set the stage for a safer, more stable, better integrated region, ending a long period of armed conflict.

We take the opportunity today to celebrate the progress we have made and to emphasize our unwavering dedication to pursuing a more comprehensive peace in the region that respects the dignity and security of all involved.

The statement, as far as it goes, is fine. But there is something missing: the name of the President of the United States who made peace possible: Jimmy Carter. It is a glaring omission: one that does not speak well for the Department of State.

This writer, not long ago, criticized President Carter in writing for his New York Times op-ed suggesting that the world accommodate itself to the continued presence of Bashar al-Assad in Syria. There were several aspects of the Carter presidency that this writer—then a young Army officer—did not applaud. But Camp David 1978 and the Egypt-Israel treaty that followed in 1979 were, in huge measure, the work of President Carter and a talented, united national security team. As Lawrence Wright puts it in his brilliant work Thirteen Days in September, “There would be no peace treaty without Carter’s unswerving commitment to bring this conflict to an end.”

Have we reached the point in this country where the political party affiliation of an ex-president makes it impossible for a major department of government to mention his name while taking pride in something the United States did honorably and well? Was it necessary to airbrush Mr. Carter in this manner? Is there no class, no decency?

Neither the proclamation nor the commemoration will wear well over time. Neither reflects well on the current state of political leadership in the United States.

Ambassador Frederic C. Hof is Bard College’s Diplomat in Residence and a distinguished senior fellow of the Rafik Hariri Center for the Middle East.