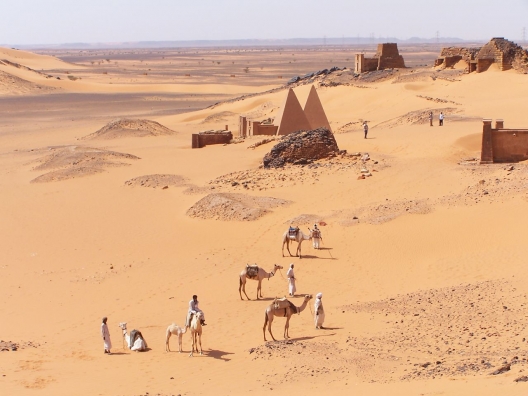 A mere four months after former president Mohamed Morsi’s ouster and the announcement of the July 3 political roadmap, Egypt is almost done with the first phase: amending the controversial 2012 constitution. An attempt to better understand the direction in which the fifty-member assembly is taking Egypt requires examination of several crucial issues within the constitution. An issue that has been left at the wayside amidst discussions on the role of sharia, the military and al-Azhar in the constitution is that of minorities.

Egypt is home to several ethnic and religious minorities that are often forgotten both by the state and the general public. The Nubian and Amazigh ethnic minorities suffered from exclusion and oppression under the former regimes, and the first place to look when predicting how they will be treated by future governments is to examine rights afforded them in Egypt’s draft constitution.

The Nubian Minority and the Right to Return

Haggag Oddoul, a Nubian novelist, is the Nubian community’s representative within the assembly. Speaking to EgyptSource, he says the assembly aims to draft a constitution that reflects Egypt’s regional and global status and helps it become a leading hegemonic regional power.  Oddoul adds this would be impossible to achieve unless major local issues are taken into account.

“The groups of Nubians, Copts, Bedouins, as well as other religious minorities such as Baha’is and Shiites altogether form around 20 percent of Egypt’s population. Some reside in border cities in the Upper Egypt governorates, Sinai, and Marsa Matrouh, and this constitutes a threat to Egypt’s unity,” he explains. The 69-year-old novelist adds that these minority groups should be well represented in Egypt’s future political map in order to preserve its territorial unity and avoid any internal disputes, or worse yet, result in movements calling for secession from Egypt.

With no official statistics available on the Nubian population in Egypt, Oddoul estimates them to be around four million. He says that his role as part of the Rights and Freedoms subcommittee is to focus on the rights of Nubians and other minorities, as a means of preserving their cultures, languages and beliefs.

Within the committee—he has pushed Nubian, and minority, rights to the forefront. According to Oddoul, an article will be added to the constitution obliging the state to develop governorate borders, especially in Nubia, Sinai, and Marsa Matrouh, with the participation of their residents and without affecting their cultures. “We haven’t decided on the exact wording of the article yet, but this would be its core statement,” explains Oddoul. Another article is to be added to the Transitional Provisions section of the constitution, obliging the state to work on resettling Nubians in their lands within  ten years. As Oddoul explains, the article would be a significant achievement in the path towards what he terms, “the Nubian right to return.” This is an issue which was raised specifically by members of the Nubian community who met with the committee. He adds, “The right to return is our most important demand. When I used this term twenty-five years ago, I received many angry and hateful reactions. Today, and as the notion of freedom has changed, I am starting to feel more acceptance of our demand, and I am pretty optimistic of where things will be going in the long run.” However, again, Oddoul says the article is not yet finalized, explaining that the wording and timeframe could be modified, but insists that the main achievement of including this article is now “irreversible.”

Oddoul expressed “relative” satisfaction regarding the direction Egypt is heading. The amended constitution, he explains, will include articles that clearly assert Egypt’s cultural pluralism and guarantee the rights of all minorities, ensuring they are able to preserve their cultures, languages, and beliefs. Those rights are guaranteed in four articles; one article stipulates that “the state is obliged to preserve the Egyptian identity, including its different cultural and civilization streams.” In regards to culture, another new article refers to Egypt’s cultural heritage as a “national treasure,” that the state is obliged to protect.  The article says any violation against Egypt’s diversified cultural heritage is “a crime punishable by law.” Other articles guarantee the equality of all citizens before the law, and ensure that the state is committed to granting equal opportunities to its citizens. While positive on the surface, the articles do little to define what Egypt’s “cultural heritage” actually is, leaving the definition open to interpretation, which is a danger in of itself.

Oddoul also added that a new notion of “positive discrimination” should be adopted, granting minorities quota representation in Egypt’s different decision-making and legislative bodies, but the idea has been met with stiff resistance. “The revolution is currently going through its second wave, and I believe that a third wave will take place probably by next year,” he predicts, adding, “The constitution will also pass through several waves. In around six years, the constitution currently being amended will be amended again, and all positive discrimination articles will be removed.”

Oddoul insists that his statements reflect his personal opinion, which might not represent the collective stance of the fifty member assembly, describing the group as “intelligent” and “patriotic”. Oddoul is optimistic regarding Egypt’s future. Explaining the reason for his optimism he says,  “I see Egypt moving forward despite the current critical economic conditions. Youth are gradually taking the lead, and they would never accept any fascist rule.”

The Amazigh, or Berbers, are an ethnic group native to North Africa, their populations concentrated mainly in Algeria and Morocco, and Egypt’s estimated Amazigh population is no more than 27,000 according to Amany al-Weshahy, the head of Egypt’s Amazigh community and World Amazigh Congress chairperson’s consultant.

As the official representative of Egypt’s Amazigh community, Weshahy requested a hearing with the assembly to discuss their demands. Weshahy told EgyptSource that the session yielded several achievements.

While she says that defining Egypt as an ‘Arab’ state in the constitution is a mistake, as Egypt blends ethnic and cultural groups, including Arabs, Pharaohs, Greeks, Turks, Amazigh, and Nubians, she does not see this changing any time soon. Referring to Egypt as the ‘Egyptian Republic,’ she explains would be more representative of its population, rather than its current name the ‘Arab Republic of Egypt.’ She says the name is a relic of the late president, Gamal Abdel Nasser’s hyper-nationalistic era. Nasser named the nation, the United Arab Republic, while Sadat changed it to the ‘Arab Republic of Egypt,’ “which clearly excludes many ethnic groups who lived and are living in Egypt,” she adds.

Rather than push for a change in Egypt’s official name, she strives to preserve Egypt’s cultural pluralism, including the Amazigh culture. The new articles tackling Egypt’s cultural diversity will be listed under a new section in the constitution called “Cultural Elements,” according to Weshahy who described the articles as “promising.””For us, those articles are significant achievements and they would be the basis of our next battle within the parliament, where we will push for new laws detailing our cultural and societal rights,” she explains.

Weshahy adds, however, that the constitution is not the final battleground for securing minority rights. She says rights are acquired on two parallel levels; one is the legal and constitutional level, while the other is the societal or cultural level. Weshahy sees encouraging signs of societal and cultural change. While Muslim Brotherhood rule has had a severely polarizing effect on Egyptian society, Weshahy sees things differently, saying that it “strengthened solidarity among Egyptians and increased their acceptance of others, regardless of their race or belief.”

She praised the fifty-member assembly for organizing hearing sessions for the Amazigh, as well as other minority groups, and predicted that the upcoming constitution would be better than the 2012 constitution, which excluded Egypt’s minority groups.

Some Nubians and Amazigh are apparently satisfied with the current constitution draft, however, atheists, Shi’ites, who have continued to call for fair representation in the constitution, and Baha’is, still fear the possibility of exclusion.

Egypt’s path towards becoming a true democratic state where all citizens are equally treated is indeed long and daunting. A constitution that recognizes the state’s different ethnicities and states their basic rights is the very first positive step in this long path. The constitutional articles tackling the issues of discrimination, Egypt’s cultural diversity, and equal citizen rights look promising on the surface. However, more important is the actual enforcement and implementation of those broad guidelines, which do not detail how the state will protect minority rights and cultural diversity in Egypt, nor how it will tackle the long festering issue of social awareness surrounding minority rights.