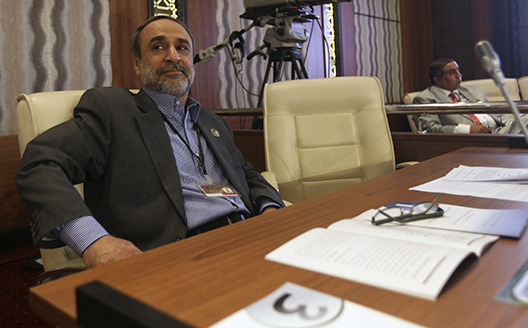 The Presidential Council of Libya’s UN-backed Government of National Accord (GNA) arrived to the capital Tripoli on March 30 aboard a navy vessel after failing to fly into Tripoli twice. Since its arrival in the capital Tripoli, the Council has managed to consolidate its position as the internationally backed executive branch of government, but the situation remains volatile and enormous challenges remains.

On a positive note, the Presidential Council arrived in Tripoli without any major violence, despite having to operate out of the Abusetta naval base instead of the usual government buildings in central Tripoli. Two crucial institutions—the Tripoli-based Central Bank and the National Oil Corporation—immediately welcomed its arrival. Support from these two key institutions ensures the Presidential Council’s control over Libya’s finances, providing it with a significant advantage against its opponents throughout Libya. Nonetheless, this advantage comes with huge responsibilities and adds enormous pressure on the Council to immediately alleviate the suffering of many Libyans by resolving the cash crisis, address the soaring food and essential goods prices, and stem the soaring foreign currency exchange rates in the parallel (i.e. black) market.

Other positive developments include the vocal support of many local Municipal Councils in Western and Southern Libya. Local authorities will play a pivotal role in the success or failure of the GNA and local authorities. If the new government can utilize these administrative bodies to respond to localized conflicts and urgent needs, its chances for building legitimacy within a heavily contested environment would greatly increase. Thankfully, Libya’s international partners have provided strong and consistent support for the GNA; some countries have already announced their readiness to reopen their diplomatic missions in Tripoli to bolster the Presidential Council’s position in Libya. Given the urgency of international backing at a time when the Council and the GNA are most vulnerable, such support must move quickly from statements and promises to closely coordinated action that would maximize the new government’s capacity to respond to Libyan needs.

One wrong move in the introduction of a negotiated (but unelected) government into an already complex political and security situation in Libya could easily tip peace process back toward instability. Ongoing opposition to the GNA continues in Tripoli as Prime Minister of the self-declared Salvation Government Khalifa al-Ghwell refuses to relinquish power. Grand Mufti Sheikh Sadiq al-Gheriani has also vowed years of “violent jihad” against the GNA if leaders insist on imposing the government on Libyans. Such sentiments should not be taken lightly; the League of Ulema rightly condemned Ghariani’s jihad threat to the unity government. In addition, remnants of the General National Congress (GNC)—led by its president Nuri Abusahmain—also refuses to recognize the Libyan Political Agreement (LPA) and continues to claim his own legitimacy and that of the GNC.

The pro-GNA bloc of the GNC (known as the Wefaq bloc) which is made up of around 73 members met in Tripoli on April 5 to announce the dissolution of the legislative body and the establishment of the new State Council—the highest consultative institution according to the LPA. On April 6, State Council members elected Abdulrahman al-Swehli as its president. These developments will likely complicate matters; many legal arguments surround the circumstances of the State Council’s meeting in Tripoli and its composition. These arguments could open the door for a destabilizing legal battle in Libya’s courts. The election of a controversial figure such as Abdulrahman al-Swehli as the council’s president—a man known for backing extremists and opposed to the Libyan peace process until he was threatened with sanctions—will likely backfire and harm the prospects for consensus building in Libya.

Another obstacle to the GNA is its own legitimacy. The internationally recognized parliament in Tobruk has yet to pass the constitutional amendment by which the LPA would become constitutionally and legally binding. Nor has parliament approved the GNA cabinet list. This legitimacy battle threatens to paralyze the new government and could result in the collapse of the peace process. An important part of the debate within the Tobruk House of Representatives is the question of the Libyan National Army (LNA) and its General Commander Khalifa Haftar; finding an acceptable settlement on this issue will prove difficult and all parties involved will have to make difficult compromises.

The following points could provide guidance to policymakers as Libya moves ahead with the implementation of the LPA over the next few weeks:

Despite the progress being made by the Presidential Council in Tripoli, its luck could run out if it overplays its hand. A proactive and reconciliatory approach will be required for any chance of success.