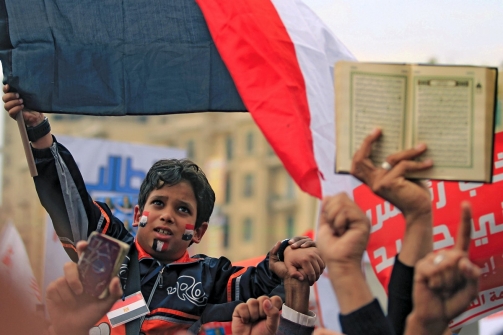 Fast away the old year passes … not so with the demonstrations in Egypt.  The increasingly heated and diverse anti-military demonstrations in Cairo, Alexandria, and other cities are not likely to end soon because they express grievances that the Supreme Council of the Armed Forces (SCAF) has consistently refused to address and that are too important for demonstrators to give up on.

Elections for the People’s Assembly will continue into early January, but they are playing out against an increasingly troubled background of a transition that might be failing.  Here are some of the top challenges I worry about for the first half of 2012:

While there is still room to hope that Egypt will eventually find its way to a genuine democratic transformation, unfortunately Egypt will begin its second year after the January 2011 revolution in a much darker place than it might have been in had the SCAF agreed to calls to bring credible civilian leaders into the transition.  This will raise painful choices for the U. S. administration, which will have to choose soon whether to anger the SCAF by cutting or reducing military aid (per conditionality in legislation authorizing military assistance) or to make a hypocrite of itself by continuing the assistance despite increasing sharp US criticism of the SCAF’s conduct.

Michele Dunne is the director of the Rafik Hariri Center for the Middle East and an official observer of the first stage of the parliamentary elections. She can be reached at [email protected].