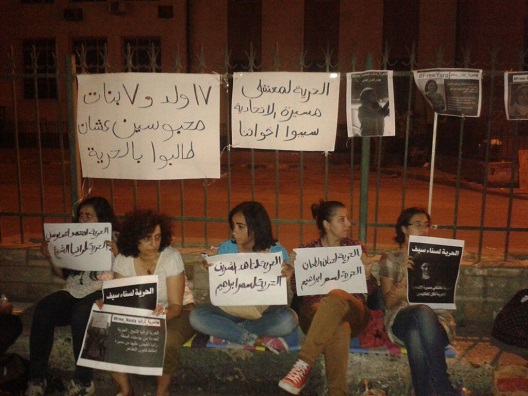 The hunger strike is a final means by which those held in pre-trial detention can call for their freedom, an end to their injustices, and guarantees of due process and a fair trial in their cases. It is a means for them to demand that arbitrary restrictions imposed on them are lifted, or that they receive proper treatment which maintains their human dignity, and are granted access to familial support and legal counsel – as is their right.

The hunger strike is an eleventh-hour attempt in which those held in pre-trial detention seek to raise awareness among the public about their situation and to mobilize public support for their demands for justice.  A hunger strike may also be undertaken to counteract negative misconceptions held by the people about the detainee and his/her colleagues after they are targeted by defamation campaigns which seek to destroy their reputations and label them traitors due to their opposition to the ruling regime.

The hunger strike is the last way in which those held in pre-trial detention can exercise a free choice in the one area over which they still have some control: their interaction with their own bodies and souls.  Indeed, even the ability of such detainees to make free decisions with regards to their own bodies and souls is limited due to the lack of freedom and excessive restrictions inside detention centers and prisons.  Such circumstances, however, can serve to diminish many of the usual human fears about willingly sacrificing one’s own physical well-being, subjecting oneself to physical harm or suffering, or depriving oneself of the basic necessities for survival.

Adopting stances of condescension towards those conducting hunger strikes – whether by casting doubt on their “real motives,” by belittling or ridiculing them, or by spreading notions of vengeance or propagating a discourse of retaliation and collective punishment – contradicts ethical and humanitarian values as well as the ability to reason and arrive at logical conclusions that is unique to humans.  So does employing double standards based on different political positions to set up a dichotomy between those who deserve empathy and those who do not, and to divide those who undertake hunger strikes into two categories: one harmless, and one highly dangerous.

The detention or imprisonment of those conducting hunger strikes is essentially related to their rejection of injustice, opposition to undemocratic practices, struggle against violations of rights and freedoms, and demands for those responsible for such violations to be held accountable.  When such a correlation exists, any form of condescension towards the hunger strikers becomes equivalent to direct participation in the entrenchment of injustice, repression, and violations.  In the same way does silence in the face of such condescension become another unconscionable – albeit indirect – form of participation in the entrenchment of these injustices.  Indeed, such silence will not spare today’s intellectuals, opinion-makers, and businessmen from being remembered infamously by history.

I beg of you – even now, as some detainees well-known to the public are on hunger strike, and as many others who are not known to the public continue similar hunger strikes – to try to stand in solidarity with these hunger strikers in the defense of rights and freedoms, or to empathize with them out of respect for their human dignity and appreciation for the severity of what it means for them to exercise this free choice in the last area over which they still have some limited control – their very bodies and souls.  I plead with you – if you are unable to stand in solidarity or to empathize with these detainees – to refuse to accept the condescension exhibited towards these detainees in the public sphere, which has been stripped of rationality, logic, and humanity due the exclusive presentation of a single opinion and discourse.  I call out to you to refrain from participating – whether directly or indirectly – in the entrenchment of injustice and repression.

This article originally appeared in Shorouk in Arabic.