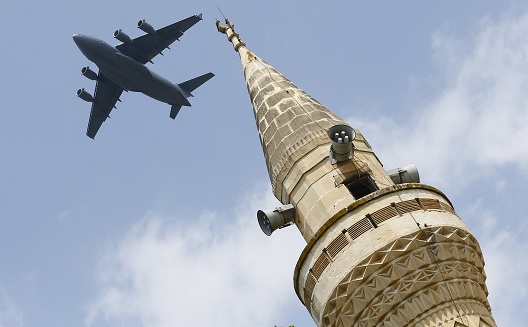 After nine months of negotiations, the United States and Turkey reached an agreement to open Turkish airbases for strike missions against the Islamic State (ISIS or ISIL) in late July 2015. Since then, the United States has stationed six F-16s at Incirlik and search and rescue aircraft at Diyarbakir airbase. The United States and Turkey have since patrolled areas in northern Aleppo, striking ISIS targets in Kurdish and Arab-controlled territory along the Turkish-Syrian border. The Incirlik agreement appears to be just one part of a larger plan designed to force ISIS from the Turkish-Syrian border and from its de facto capital, Raqqa. These plans pre-date Russia’s intervention inside Syria and appear to be moving ahead, despite the challenges posed by the Russian air force’s bombing of targets on behalf of the Syrian regime.

Open source data suggests that Turkish and US jets have struck targets along the so-called Marea line: a span of territory held by Turkish-backed rebels against ISIS in northern Aleppo. The United States has also hit targets in support of the Democratic Union Party (PYD), a nationalist Kurdish party that controls about 240 miles of territory between the Euphrates river and the Iraqi border.

Although the PYD maintains close links to the Kurdistan Workers’ Party (PKK)—a US, EU, and Turkey-designated terror group that has battled the Turkish state for political autonomy since 1984—the United States has drawn a distinction between the PYD and the PKK. Turkey has refused to endorse the US position, with high-level officials claiming that the YPG (the PYD’s militia) poses as much a threat to Turkey as ISIS. Despite this rhetoric, open source data suggests that Ankara has endorsed elements of the US strategy inside Syria, albeit with an important caveat: any YPG advance across the Euphrates is a red line for Turkey and could prompt Ankara to strike the US-backed group.

The United States has strong incentive to work with the YPG to prevent this scenario from happening. To support the anti-ISIS air war, Turkish media has reported that pre-fabricated housing for 2,250 is being built for military personnel, purportedly in conjunction with a plan to base more strike and refueling aircraft at the airfield. Taken together, this move suggests that the coalition may station more aircraft at the airbase as part of a renewed effort to push ISIS from its remaining strongholds along the Turkish-Syrian border (Jarablus and Manbij). Turkey has foreshadowed this operation, saying that its participation in the air war would result in the creation of an ISIS free zone along its border. In parallel, the United State has indicated that it would provide ammunition for the YPG and allied Arab Free Syrian Army (FSA) fighters to advance on Raqqa. Both offensives would require coalition air support, presumably based inside Turkey. Thus, should the YPG test Turkey’s red line, the coalition could lose access to Incirlik and even end up bombing opposing targets (with the United States in support of the YPG and Turkey trying to stem their offensive west of the Euphrates).

Ankara has quietly made clear that it would prefer a more international presence at its airbases, both as a means to demonstrate Turkey’s commitment to the multinational coalition and also as a symbol of international burden sharing. Turkey also hopes that the increased number of aircraft at Incirlik will result in the creation of a de-facto no fly zone inside the so-called ISIS free zone. Before the Russian intervention, Turkey and the United States had suggested that the increased number of coalition aircraft operating in northern Aleppo would deter Assad from flying strike missions in support of Syrian regime troops in the area. Russia’s deployment of thirty-two combat jet and eighteen attack helicopters certainly changes the coalition’s calculus; however, only four of these jets are specifically configured to challenge coalition aircraft. Nevertheless, Russian action appears to have ruled out the possibility of a no-fly zone over all of Syria, although to do date, no Russian airstrikes have hit inside the proposed ISIS free zone.

Based on the strike data thus far, Russian jets mainly provide point defense for the Syrian regime’s stronghold of Latakia. This includes support for the regime’s offensive operations near Hama, where Russian aircraft and equipment have aided in the recent Syrian regime offensive to take control of territory lost to the anti-Assad insurgency. But the relatively small number of Russian aircraft based inside Syria suggests that the high number of daily airstrikes may not be sustainable. In addition, the current offensive in Hama could drag on, especially if the anti-Assad groups continue to have access to anti-tank missiles.

The Russian Air Force has also struck targets along the Latakia-Idlib line, just west of the town of Jisr al-Shugur. These strikes directly impinge upon a key element of Turkey’s Syria policy: direct support to Jaysh al-Fateh—a rebel coalition comprising Ahrar al-Sham (Ankara’s closest allies inside Syria), the Nusra Front (Syria’s al-Qaeda affiliate), and a smattering of FSA rebel groups (some of which receive US assistance via a jointly staffed military operations room in Reyhanlı, Turkey). Turkey has emerged as the coalition’s key backer in the north, while the United States has refused to engage with the group’s most important member, Ahrar al Sham, owing to its links to and cooperation with Nusra. Ankara had hoped to use the group to continue taking territory from the Assad regime to pressure the Syrian president to make concessions during any future peace agreement that would include Assad’s departure from power.

The Russian intervention could seriously challenge this aspect of Turkish policy, especially if its air force continues to strike Jaysh al-Fateh targets near Jisr al-Shughur. Such action could help stem the group’s advance and possibly allow the regime to retake some of the territory it has lost in recent months. However, Russian intervention will not likely alter the dynamics of the conflict. The Syrian regime has steadily lost territory and personnel to insurgent groups united by their shared interest in overthrowing Bashar al-Assad. Indeed, Turkey may opt to increase its support for Jaysh al-Fateh to counteract Russia’s intervention, just as other supporters of the Syrian opposition—like Jordan and Saudi Arabia—could relax their policy of conditioning military support for insurgents in the south on refraining from cooperating with the Nusra Front.

The open source data suggests that the pace and number of strikes from Incirlik will increase in the coming months. This trend suggests a more concerted effort to root out ISIS from its border strongholds. For now, the United States and Turkey do appear to have reached an understanding about key elements of the tactical plan to target ISIS in northern Aleppo and in Raqqa. The two sides also appear to have reached an unstated agreement about the PYD. However, the two countries will have to resolve the discrepancy about the composition of the “hold force” inside the proposed zone, with Ankara more amenable to an Ahrar-led force and Washington having ruled out cooperating with the group.

The two sides could nonetheless sidestep this disagreement if the United States chooses to work through the small number of vetted FSA personnel (some of which have been trained to call in airstrikes), while leaving Turkey to work with its own trusted rebel groups in Idlib. While independent of one another, both serve the same two purposes: helping insurgent elements attack ISIS and increasing pressure on Assad. Russian intervention will complicate these efforts, but the coalition clearly intends to continue with its airstrikes.

These concurrent developments suggest that, without a shared strategic vision for a post-Assad Syria, outside powers will pursue their own agendas to shape the course of the civil war, thereby prolonging the conflict. In the long term, however, these tactical moves could translate into elements of a more strategic plan, wherein elements inside Syria—along with their foreign backers—agree to a post-Assad power sharing arrangement that keeps the country united, instead of fracturing along the current battle lines.

Image: A Turkish Air Force transport aircraft flies over a minaret after took off from Incirlik air base in Adana, Turkey, August 12, 2015. (Reuters)