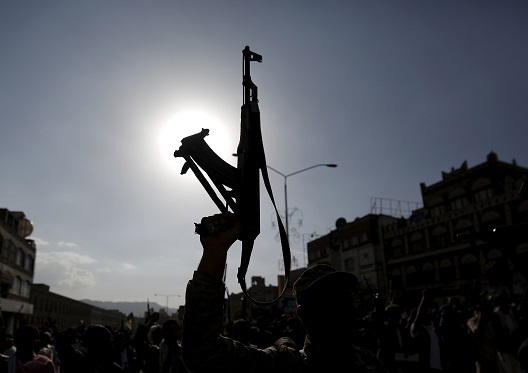 The conclusion of the Arab League Summit on March 30, 2015 culminated in a grand statement announcing the formation of a joint Arab military force to tackle regional challenges from the Maghreb to Yemen. While significant, particularly given the ongoing military operations and ground force mobilization led by Saudi Arabia against the Houthis in Yemen, the formation of a unified force has long preoccupied the Gulf Cooperation Council (GCC) countries in an effort to shore up their own security. Could this announcement herald a new source of stability in a volatile region? While some have hailed this development as a breakthrough in cooperation and a new sense of Arab responsibility toward their own regional security, others caution that such an arrangement would only exacerbate sectarian tensions and inflame the Arab Cold War between Saudi Arabia and Iran.

The Arab League announcement stipulated that the unified force would—in accordance with its commitment to regional security and international law—engage in rapid military intervention to counter emergency threats (including terrorism and other threats to national security) in response to a request by a member Arab country. The announcement also clarified that participation in the force was optional. While Saudi and Egyptian officials voiced enthusiasm for the idea, Iraq, Algeria, and Lebanon have all expressed their reservations.

The announcement came against the backdrop of intense discussion over Yemen at the Arab League Summit. The Saudi-led Arab coalition has imposed a blockade on Yemen and for nearly a week has struck Houthi positions by air and news outlets have also reported intense exchanges of fire between ground troops at the Saudi-Yemeni border and preparations for a ground incursion by Saudi, Egyptian, and Pakistani forces. The blockade threatens to worsen an already severe humanitarian crisis, with the coalition blocking access to the International Committee for the Red Cross and UN officials, including Secretary General Ban Ki-moon, warning that the country is on the verge of total collapse.

Sarah Sirgany, a Nonresident Fellow with the Rafik Hariri Center for the Middle East, attended the summit in her capacity as a journalist. She described the mood as “all smiles, but hiding deeper divisions… Egypt had sold the unified force as a done deal a few days before. But in speaking with different officials, no, there are some major differences.”

When asked about the likelihood that the joint force could promote sustainable security, Sirgany questioned the ability of Arab governments to agree on a comprehensive unified pan-Arab vision for the region, which would directly affect the selectivity regarding the missions undertaken by the proposed force. She questioned further the authority from which such a force would derive its mandate. “Who calls the shots?” she said, “Those with the boots or those with the money?” She also worries that, in a region lacking in popular representation, authoritarian powers could use the force to provide reciprocal favors, tipping the military balance in support of chosen regimes.

Richard LeBaron, a Senior Fellow with the Atlantic Council focused on Arab Gulf affairs and security in the Middle East, said that the unified force was not necessarily a bad concept. “It is a good idea for Arabs to address their own security issues. It’s good to use military force when national security is threatened and when appropriate.” He contends however that the force the Saudis have mustered is specific to the Yemen campaign, as well as a show of strength in the face of Iranian regional gains in Iraq. It is harder to tell whether it will be the beginnings of an effective unified Arab military structure. “This is not NATO, this is not a GCC force, it’s more an Arab force of the willing and capable.”

LeBaron cautions that coordinating multinational militaries is far more difficult that it may seem. “A unified force is easy to talk about in principle, but hard to execute,” he said. “And this is where Arab forces will need US support.” Given the US experience in Iraq and Afghanistan, the United States could provide valuable insight in technical areas such as deconflicting command and control structures, managing airspace, and coordinating operations to prevent friendly casualties.

Nabeel Khoury, a Senior Nonresident Fellow with the Rafik Hariri Center and former US diplomat in Yemen, described the Arab League proposal as the culmination of Saudi Arabia’s efforts to form a Sunni Muslim alliance to block Iranian hegemony in the region. “This is an extension of Saudi Arabia’s GCC+2 project,” he said, referring to previous invitations to Jordan and Morocco to the GCC in an effort to augment the Gulf states’ untested military capability.

When asked about the Saudi-led intervention in Yemen, Khoury was impressed that the kingdom would galvanize support from so many countries to take direct action in defense of their national security interests. But he also warned that such a massive operation may take more finesse than Saudi Arabia can muster. “Credit where credit is due, but this is a test, both politically and militarily,” he said. “Can you conduct an effective campaign? More importantly, can you stop it at the right time?”

Khoury saw the unified force in part as the product of lighter US footprint in the region. “As the US gets closer to a nuclear deal with Iran, the Gulf worries that the United States will not be as reliable a partner in guaranteeing its security. He notes that proactive US diplomacy, particularly in the case of Yemen, could still prevent a protracted conflict and add pressure to bring the Houthis back to the negotiating table.

Mirette Mabrouk, Deputy Director of the Rafik Hariri Center, spoke to Egypt’s involvement in the Yemen operation, the push for the unified force, and the implications for its role in the region. “Egypt is driven by profound fears of security in the region,” she said. “While intervention in Libya makes more sense, Yemen is important to Saudi, and Saudi backing is important to Egypt. I don’t see how they could have avoided involvement in Yemen.” The problem, she notes, in the context of a Saudi-Iranian proxy war is the disregard for the human cost.

Mabrouk sees Egypt’s involvement in the coalition and the Arab League proposal as part of its larger struggle to reassert its geopolitical relevance. Egypt will use its largest Arab military in the region to “get back to being a leader.” Although the pan-Arab force may be no different from an ad hoc coalition, she says, “Egypt needs regional consensus so as not to appear to act unilaterally.” By participating in the coalition against the Houthis, Egypt can use the joint military force to address conflicts that directly affect its own security, such as in Libya.

Amy Hawthorne, a Senior Fellow with the Rafik Hariri Center, notes that Egyptian President Abdel Fattah al-Sisi’s goal for Egypt to play a much more active regional role could be linked, as well, to Cairo’s bid for a seat on the UN Security Council.  Last September, Sisi announced at the UN General Assembly his intent to gain a seat in order to address Arab crises and protect African interests. “Sisi’s remarks at the Arab League Summit last weekend again expressed his desire to boost Egypt’s Arab and African roles. He not only vowed to help defend Yemen’s ‘Arab identity’ against Iranian influence, but also referenced Somalia,” said Hawthorne. “Egypt has long seen itself as a leader among African nations. Sisi is keen to translate this aspiration into greater influence on the ground on issues crucial to Egypt like the Ethiopian Dam; moreover, Egypt will need votes from African countries at the UN to make it onto the Security Council.”

Hawthorne agrees that with Sisi’s regional ambitions, his assertion that Egypt’s security is linked to the security of Saudi Arabia and other Gulf countries, and the massive Gulf funding on which Egypt relies, Egypt’s joining the Saudi campaign in Yemen might seem inevitable. But she warns about more extensive Egyptian involvement in this messy conflict, beyond the reported current naval deployment. Hawthorne said, “If Egypt gets embroiled in a Yemen quagmire, especially by sending in ground troops, a dangerous overstretch could result. Egypt’s military already has its hands more than full dealing with domestic security threats.”  She added, “Shifting attention and resources away from trouble spots such as Sinai and the Libyan border would make it even harder for al-Sisi to stabilize the country. And Egypt’s disastrous intervention in Yemen’s civil war in the 1960s provides ample reason for extreme caution.”

All of the experts above acknowledge the Saudi-Iranian Cold War at play in Yemen. The joint Arab military force represents only the latest volley from the Sunni Muslim side of the equation, attempting to block Iran’s hegemonic impulses in the region. While increased cooperation among Arab countries would shift responsibility away from foreign actors—welcome news for the United States, no doubt—the sectarian nature of the force could regionalize local problems, potentially leading to greater tensions and undermining the security of individual member states.

Tarek Radwan is an Associate Director for the Rafik Hariri Center and editor of the MENASource blog.

Image: A follower of the Houthi group holds up his rifle as he demonstrates against the Saudi-led air strikes on Yemen, in Sanaa April 1, 2015. (Reuters)