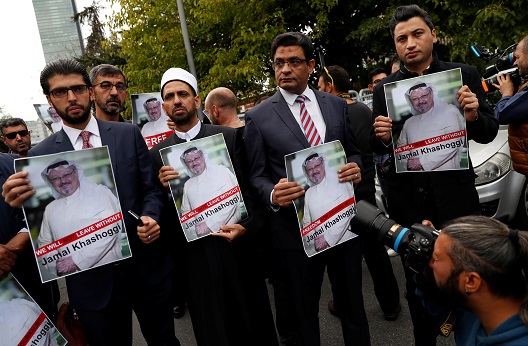 From the abuses of the male guardianship in Saudi Arabia to arrest and torture of dissenters in Egypt and the jailing of environmentalists and journalists in Iran, the Middle East is rife with human rights abuses. Nor is this something new. Authoritarian regimes in the Arab world, both monarchical and republican, since their independence from colonial powers have routinely used repressive measures to keep their opposition at bay and their broader population quiescent. Saddam Hussein notoriously put down a Kurdish rebellion in Halabja in 1988, gassing 5,000 people during the larger campaign of al-Anfal which reportedly killed over 50,000 Kurds. Syria, even before Assad’s bloody war against his opposition in 2011, routinely jailed, tortured, and killed opposition figures; and had no compunctions against tracking them into neighboring countries, particularly Lebanon, in order to do so.

In this context, the apparent killing of prominent journalist Jamal Khashoggi, though shocking and sickening, is also sadly typical of the behavior of autocratic regimes in the region, his own included. Since becoming crown prince, Mohammad Bin Salman (MbS) presided over the jailing of women dissidents and the execution of Shia clerics—all while launching a now four-year old war on neighboring Yemen which has devastated the country and created the worst humanitarian crisis in the world without achieving any of its vaguely stated goals. This is particularly disappointing in light of his image as a reformer, which he spent millions propagating in the west, and has unfortunately led many scholars and journalists to lend it more credence than is deserved.

“The most significant human rights issues included unlawful killings, including execution for other than the most serious offenses and without requisite due process; torture; arbitrary arrest and detention, including of lawyers, human rights activists, and antigovernment reformists; political prisoners; arbitrary interference with privacy; restrictions on freedom of expression, including on the internet, and criminalization of libel; restrictions on freedoms of peaceful assembly, association, movement, and religion; citizens’ lack of ability and legal means to choose their government through free and fair elections; trafficking in persons; violence and official gender discrimination against women, although new women’s rights initiatives were announced; and criminalization of same sex sexual activity.”

Despite a low press freedom ranking of 86 out of a 100 by Freedom House and all the facts highlighting Saudi Arabia’s low regard for individual liberties and respect for its citizens’ human rights, US President Donald Trump still heaped praise on the kingdom for its reforms in his speech before the United Nations this year, “There is Saudi Arabia, where King Salman and the Crown Prince are pursuing bold new reforms.” In remarks to the press on the White House lawn, Trump suggested the “other-leaders-are-bad” argument, saying “…a lot of records are overlooked. If you look at Iran…take a look at Syria.” Inadvertently, Trump drew parallels to his chosen close ally, MbS, with a regime that he wants removed and another he wants sanctioned.

With logistical support and political backing from the US administration to Saudi Arabia and its Arab coalition in Yemen, the question here turns from mere tolerance of flagrant abuses of human rights and total disregard for the sanctity of life to enabling perpetrators in return for perceived strategic and financial value. Sadly, embracing dictators is nothing new.

This current sentiment typifies long-standing American attitudes towards dictators world-wide, especially during the cold war period when some dictators sided with the US against the Soviet Union and were welcomed into the fold regardless of how badly they mistreated their own people. After the end of the cold war, and the presidencies of Bill Clinton and Barack Obama, there seemed to be a genuine, if inconsistent attempt to shift US support from governments to people, and from cynical national interest to a value-based foreign policy. After 9/11, former US president George W. Bush, despite supporting such programs as the Middle East Partnership Initiative (MEPI)—which provided support to numerous civil society organizations, again fell into the convenience of relying on authoritarian regimes in the region to support his global war on terror. Meanwhile, Obama found that his rhetorical advocacy of being on the right side of history was too complicated and costly; he offered only lip-service support to the Arab masses who rose up against authoritarianism in 2011.

Regardless of how the mystery ends, the Khashoggi affair is likely to have profound repercussions in Saudi-Western relations and perhaps inside Saudi Arabia itself. King Salman and family elders may realize that the Kingdom’s emergence from years of conservative and cautious foreign policies into a more aggressive stance inside and outside their borders may have gone too far. The logical conclusion to that line of thought would be another realignment of their top leadership. Failing that, the pressure, particularly from the US Congress, is not likely to let up. However, Trump has recently touted Saudi’s explanation of ‘rogue killers’ are to blame, and not the Kingdom. While Congress and the Administration remain divided, Congress, which has triggered the Magnitsky Act and has two separate legislations which failed to get majorities in 2017, is likely to get more aggressive on US support for the Saudi war in Yemen. If a Democratic majority manages to do this, MbS would be left without the means to pursue his current reckless foreign policy strategies, especially in Yemen.