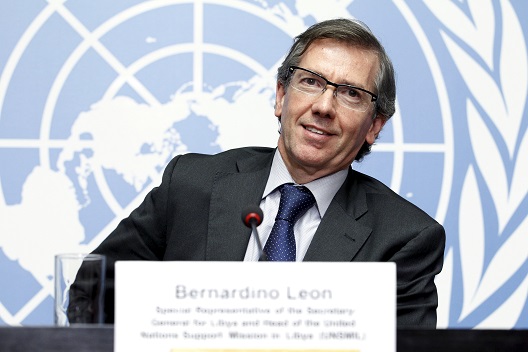 Habemus Papam. With these words, the Cardinal in charge announces the conclusion of the long voting process that leads to the election of a new Pope, relieving the anxiety and meeting the expectations of the faithful. With the same trepidation and enthusiasm, the UN Special Envoy to Libya Bernardino Leon announced the evening of October 8 that the Libyan parties had finally reached a political agreement in the Moroccan city of Skhirat on the composition of a new Government of National Accord (GNA). Despite the approval of the delegates present at the negotiations, the two rival parliaments—the internationally recognized House of Representatives in Tobruk and the General National Congress in Tripoli—must still give their blessing to the GNA.

Despite the tension within and between each side throughout the negotiations process, Leon succeeded in garnering enough of a consensus to be optimistic regarding the endorsement of the new government. The GNC in particular has struggled with deep divisions between different factions over the agreement—with each accepting or rejecting it to varying degrees. Sources within the assembly, however, spoke of a commitment by the majority to reach consensus and move past the political crisis.

Should the rival legislatures sign off on the candidates, the names and qualifications of the proposed members of the GNA will determine whether it will survive the myriad challenges facing both the country and the body itself. Fayez Mustafa Serraj, the proposed Prime Minister is a member of the HOR elected in Tripoli, who comes from a well-known and respected family of political personalities involved in politics since the struggle for independence of the late 1940s. An engineer by education, Serraj maintains a mild and reflective demeanor, which may allow him to mediate effectively between the various components of a fragmented polity. This character trait will help him build the much-needed consensus on the thorniest of issues, such as the disarmament of militias, the rebuilding of security institutions, the restoration of state legitimacy, post-conflict reconstruction, and the provision of basic services.

The three proposed deputies to the prime minister include Musa al-Koni representing Libya’s south, Fathi al-Majberi for the east, and Ahmed Maitiq for the west. Maitiq in particular represents a judicious choice. Appointed Prime Minister by the GNC in 2014 in an election contested by the opposition, he accepted a ruling by the Libyan Supreme Court annulling his election. This concession demonstrated an uncommon respect for the rule of law and state institutions. A well-known and widely respected businessman from Misrata, Maitiq has worked to build a team of Libyan and foreign technocrats to devise a plan for the economy and the establishment of good governance over the past year, distinguishing him among the proposed members of the new government.

Two senior ministers have also been proposed: Omar al-Aswad from Zintan and Mohamed al-Ammari. Ammari, a highly educated member of the GNC dialogue team, played a constructive role in the negotiations that helped reach a final deal. The agreement also proposes Abderrahman Swehli from Misrata as Chair of the State Council. Originally described as a hardliner and a vocal opponent of negotiations, Swehli changed his attitude when the GNC appointed him to lead its delegation in the talks. The agreement foresees the creation of a National Security Council and proposes Fathi Bashaga from Misrata as its head. Bashaga’s assertive yet honest personality—not to mention the wide popularity he enjoys in the western region—makes him a strong candidate. As a former air force officer, he has the competence to understand and confront difficult security challenges facing the country.

Nevertheless, the proposed GNA members’ qualifications matter little if the multitude of obstacles and complications that would handicap even the most qualified of governments are not addressed. In today’s Libya, no government can even begin its work without the strong support of the international community. The nature of the support needed must cover the whole gamut of state-building ingredients that include political, structural, and military assistance. For the GNA to succeed it must enjoy strong, unified, and effective global support—including those regional actors that have chosen to back one faction over another, which threatened and delayed the UN-led negotiations.

Many other powerful spoilers may seek to derail this agreement—whether rogue militias, religious hardliners, the many gangs and criminal organizations that prosper in the absence of state institutions, or even Chief of Staff of the Libyan National Army Khalifa Haftar whose opposition to a deal with the GNC is well known. These actors may succeed in preventing the formation of this government or any possibility for it to work effectively Libya. Nonetheless, reaching this stage in the formation of the GNA represents a significant achievement that should not be undermined with petty cynicism. Its long and hard journey has only just begun, but the GNA symbolizes the first step toward a more stable and prosperous Libya. It is up to Libyans to decide whether they want to stand behind the GNA and take this first step.

Karim Mezran is a Senior Fellow at the Atlantic Council’s Rafik Hariri Center for the Middle East focusing on the politics and economics of North Africa.

Image: Special Representative of the Secretary-General for Libya and Head of United Nations Support Mission in Libya (UNSMIL) Bernardino Leon speaks at the Palais des Nations in Geneva, August 11, 2015. (Reuters)