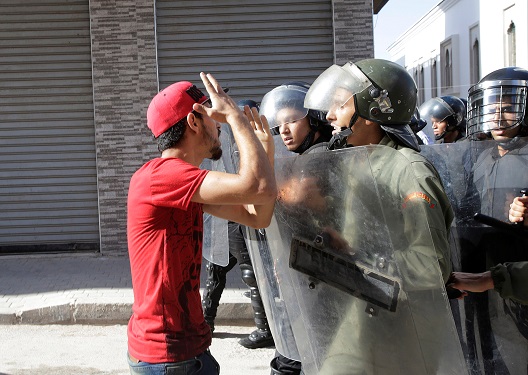 The demonstrations, police repression, and continued violence in al-Hoceima in the northern Rif region of Morocco bring back not only the rebellious past of that region, but also memories among Moroccans of Hassan II’s repression—the so-called years of lead. The events also bring the country full circle back to the beginning of the Arab uprising of 2011 when optimists viewed Mohammed VI’s reasoned reaction to the February 20 uprising as a sign that Morocco had indeed taken a different path from the one taken by the fallen leaders of Tunisia, Egypt, Yemen and the still standing one in Syria.

For almost a year now, Moroccans of the Rif have been demonstrating in anger against the police brutality that killed a fishmonger named Mohcine Fikri who was crushed to death in a garbage truck’s compacter and the seeming insensitivity of the state to his fate and indeed the fate of the region. Moroccans from various regions have demonstrated in solidarity with their brothers in the north and have expressed their disappointment in the state’s performance. Civil society leaders, many of whom had suffered under Hassan II’s harsh suppression of student demonstrations in the late seventies and early eighties, had come to think favorably of his son and heir Mohammed VI. Indeed, many former political prisoners felt positive enough about the young king’s reforms early in his rule that they took up government jobs or helped in the human rights field by coordinating their NGO work with that of the ministry of human rights. Now, at least those most sympathetic to the February 20 movement and who counseled the young rebels in 2011 to moderate their views and actions are turning to a darker view of the monarchy. The Moroccan Organization for Human Rights (OMDH) called for solidarity with the demands of the youth in the north and the Moroccan Association for Human Rights (AMDH) at one point led a twenty-four hour hunger strike calling for the release of those detained for demonstrating.

As with the infamous 2011 events in Tunisia, sparked by a peddler named Bouazizi immolating himself, it is the underlying poverty and sense of humiliation of a wide swath of Rif dwellers that has fuelled this more recent uprising. Civil society leaders are warning that after an initial period of political and economic reform the monarchy (or to be precise the deep state referred to as al-Makhzen in Morocco) is again turning defensive and resorting to repression and putting the brakes on steps towards democratization.

Politically, the positive step taken by the King after 2011, accepting to name a prime minister from the party that won the most seats in parliament, led to the appointment of the country’s first Islamist prime minister, head of the opposition Party of Justice and Development (PJD). Abdelillah Benkirane, prime minister until April 2017, was able to stay as long as he did in this post by toning down his Islamist rhetoric and accepting in advance the King’s veto power over any and all decisions made by him. In effect, the King remained the real power counseled by the same close advisors he had since acceding to power while Benkirane appeared, most of all to his supporters, as a paper Islamist and ineffective opposition leader.

Economically, Morocco retains a low ranking on indices of development, corruption, democracy and youth employment. Classified as partly free on the Freedom House democracy index, at forty-one percent the country remained in the lower half of the ranked world countries for 2016. Transparency International’s corruption perceptions index gave Morocco a score of 37 out of a possible score of 100 for 2016. On the human development index for the same year, Morocco was ranked 123 (out of 188) on the United Nation’s human development index (a composite of life expectancy, education and income per capita data). This puts Morocco in the lowest third of world economies, behind Palestine and the Philippines. World bank prognosis for the year ahead projects a healthy 3.8 percent growth, but given the level of corruption and dominance by a powerful business elite, the report concludes “Morocco’s already low labor participation rate keeps declining. Looking forward, Morocco continues to face the paramount challenges of promoting stronger private-sector-led growth and job creation, and increasing shared prosperity.”

Morocco’s years of lead ended with the release of remaining political prisoners in 1991. There followed a period of optimism, with the King’s allowing the formation of civil society groups, more political freedoms, and the formation of the country’s first opposition government in 1998. Another era of optimism began after Hassan II’s death and the ascendency to the throne of his son Mohammed VI in 1999. The sense of optimism was palpable as opposition leaders and former political prisoners spoke freely of a new era in Morocco and praised the young king for being “quite different from his father.”

The years of lead, or what some refer to as the Tazmamart era, in reference to the infamous prison in the desert where most of the disappeared were incarcerated, featured the repression of university students and young political activists from the late seventies and early eighties. While some belonged to left wing parties others were simply disgruntled youth desiring a genuine democracy in their country. The authorities were alarmed when demonstrations spilled outside university campuses and connected with city workers and residents of poverty belts around major cities like Casablanca. Incarceration included the isolation and torture (of both men and women) and some of the disappeared were never returned to their families.

To be sure, Morocco can never go back to the dark days of the years of lead. Political opposition is now too entrenched in the institutions of government, the courts are not totally under the thumb of the regime and civil society organizations are too active on social media to allow for disappearances and torture to go unnoticed, not just by Moroccans, but by the whole world. That said, events in Hoceima highlight the limits of progress in civil liberties and human rights and the disappointment of human rights activists after an initial optimism in the ability of Mohammed VI to bring about positive change.

Fouad Abdelmoumni, one of those civil society leaders who emerged from the dark days of Hassan II to fight for full democratization and economic rights for all Moroccans said in a conversation with the author, “The regime is pushing as much as it can towards the monopoly of decision, the emasculation of new elites, and the militarization of the street. The state obviously feels threatened by democratization but I am confident that social demand for it can only grow and that the inability of the regime to satisfy economic needs by depleting reserves will highlight the regime’s incompetence and the need for new elites.”

Dr. Nabeel Khoury is a nonresident senior fellow at the Atlantic Council’s Rafik Hariri Center for the Middle East. He served twice in Morocco, he was the Press Attache at the U.S. Embassy in Rabat from 1994-1997 and again as U.S. Consul General from 1998-2002.

Image: Photo: A protester argues with riot police during a demonstration against official abuses and corruption in the town of Al-Hoceima, Morocco July 20, 2017. REUTERS/Youssef Boudlal