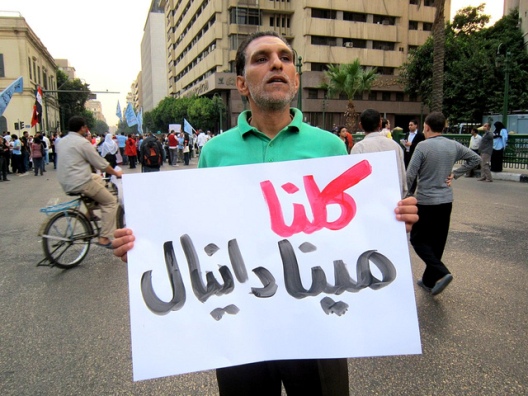 On the heels of the recent surge in popular support for the military, calls for the presidential candidacy of Commander-in-Chief of the Armed Forces Abdel Fattah al-Sisi, and an October 6 operetta performance meant to awaken dormant nationalist tendencies, comes the two year anniversary of the Maspero Massacre.

On October 9, 2011, protesters marched to state radio and television building Maspero to demonstrate against the authorities’ failure to investigate the destruction of an Aswan church and related sectarian attacks. While the majority of protesters were Coptic, a number of Muslims also participated in solidarity. As marchers neared the building, they were first attacked by unknown assailants who threw bottles and rocks; after the arrival of the demonstration at Maspero, military and security forces shot live ammunition at the demonstrators and intentionally ran civilians over with APC’s. Within minutes, state television reported the alleged death of army soldiers (which was blatantly untrue) and called for civilians to take to the streets and fight off “violent crowds of Copts” and “foreign infiltrators.” Fueled by unresolved sectarian tensions, and with the state’s green light via its explicit incitement on television, zealots took to the streets. That night, over twenty-eight civilians were killed and at least 212 injured in what was one of the most public and concerted massacres committed by the military in post-revolutionary Egypt.

Two years later, as has been the case with the majority of violence committed at the hands of Egyptian authorities, justice has not been served. The army continues to maintain that civilians initiated attacks, denying activist accounts despite extensive video and photo documentation to the contrary. In the aftermath, thirty-one civilians were charged with attacking the armed forces and stealing army weapons. Many have argued that the military trials these civilians faced were meant to distract the population from the bloodied hands of the armed forces and the horrifying sectarianism that colored the incident. Only three soldiers were convicted of manslaughter for the massacre. They were handed limited sentences– two were sentenced to two years in jail and one to three years.

In addition to the disappointing failure of the civilian and military judicial systems in this case, incitement and sectarianism, two phenomena that colored the context in which Maspero was allowed to take place, remain unresolved today. Both state-owned and private media have played significant roles in inciting segments of the population against each other, whether we observe the state’s insistence on using terms like “war on terrorism” or Islamist-owned channels that continue to place the blame for the removal of former President Mohamed Morsi on Coptic protesters and the head of the Coptic Orthodox church, Pope Tawadros II. On the issue of sectarianism, there is no doubt that troublesome rhetoric continues to be used by groups like the Muslim Brotherhood and that the state has continued in its failure to address sectarianism with anything other than superficial mediation attempts and short-sighted band-aid remedies to deal with deep-seated problems most clearly demonstrated by the concerted attacks on churches that took place after the dispersal of the Nahda and Raba’a al-Adaweya sit-ins on August 14, 2013. The state has, in addition, to failing to investigate Maspero as an incident, also failed to adequately address its root causes.

The families and friends of those who lost their lives will continue to mourn this day their entire lives. The activists who saw their friends’ bones crushed by army APCs will be haunted by these images forever. The blood of the slain will stain the hands of the state and Armed Forces, who have categorically failed to hold their own accountable for the massacre of civilians in numerous incidents since January 25, 2011.

As an Egyptian expatriate, I will never pretend to be able to imagine the immense sense of loss, physical and psychological hurt, and utter destruction of hope that victims and activists felt on the day of the Maspero massacre, and continue to feel today.

As an Egyptian citizen, however, it is my duty to continue to demand that the Armed Forces admit to its lack of success in governing Egypt; it is my duty to refuse the objectification and idolization of an entity whose subordinates have attacked its own people; and it is my duty to mourn those killed at Maspero and in similar attacks. These memories serve as calls to action in the ongoing, and often exhausting, fight for a better Egypt.

Image: Photo: We are all Mina Daniel (Gigi Ibrahim)